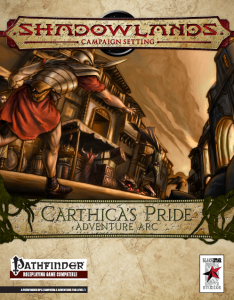 This module is 28 pages long, 1 page front cover, 3 pages editorial, 2 pages ToC, 2 pages of advertisement, 1 page back cover  and 3 additional blank pages between acts, leaving us with 16 pages of content – FREE content, I might add, so let’s take a look!

When the two thieves Jhaari and Atharius returned to Tarina loaded from their last adventure, they started spending gold for the good life almost immediately – and made a fateful decision. When stumbling home, they crossed paths with a very intoxicated noble named Carthica Portenus. Taking his gold, goods and signet ring, they left the drunk noble in one of the doors of the streets, which resulted in said noble going to jail and being publicly humiliated. Not one to let such an insult slide, the noble has hired one Natasha Corvina to hire capable help – his goal is easy right now: Via his contacts, he has determined the whereabouts of his signet, in the custody of the “Urgent Messenger”. He wants this signet returned and the thieves publicly humiliated. Enter the PCs.

After a short negotiation with Carthica and Natasha in The “Column’s Shadow Tavern”, the PCs (studded with starting secrets, by the way – secrets are worth quite a bit in the Shadowlands…) take off on the trail of the two missing rakes and the mysterious “Urgent messenger” – probably going to the “Flower Shop” first: A posh house of indulgences of the flesh that requires quite a steep sum to enter, where voluptuous Lady Lilliana can point the PCs towards their goal – if they pay for her guidance with secrets, favors or solinns (currency, beyond PCs at this level…), she reveals that the Messenger is not a person, but a place – an underground tavern frequented by thugs and rakes. Now in debt or in the know that one of their secrets rests in the hands of beautiful Lilliana, the PCs are off to the messenger.

Unbeknown to the PCs (unless they are paranoid), would be the team of agents of the black hand seeking to acquire the signet for their own nefarious purposes (and thus working as a potential hook for the sequel) – fighting them near the well-hidden location of the messenger may make for the module’s first combat if the PCs notice them – otherwise, they’ll be in for a surprise in the end of the module. In the aftermath of an eventual combat, the signature rings of the black hand may provide the players an edge in the well-hidden underground tavern. There, they can find the rakes and demand the missing signet ring – and potentially humiliate them in front of all their friends: by besting them in a series of skill-challenges that range from gambling to balancing, arm-wrestling and dagger-tossing and also a blindfolded test of courage. How well they entertain the tavern will determine whether they may leave unmolested.

the module contains also a list of 25 back street encounters for the city of Tarina dn a map of the tavern that’s player-friendly and one of the back alley, which unfortunately is only appropriate for DMs.

Editing and formatting are top-notch, I didn’t notice any glitches. Layout adheres to a beautiful 2-column full-color standard with gorgeous artworks and mosaic-studded borders that fit well the quasi-Roman theme that subtly suffuses the Shadowlands. The pdf comes fully bookmarked for your convenience, but without a player-friendly version of the first map and without a printer-friendly version.

This is a nice, short but sweet introduction to the city of Tarina and the fluff the Shadowlands-setting seeks to evoke – while not reinventing the wheel, we get a solid prologue module to the bigger things to come in commercial modules. This product being free, I don’t have much to complain. Usually, I’d harp on the numerous blank pages that artificially bloat page count and can elicit an undue toll of ink or toner when printing this one blind, but being free and coming with top-notch production values, I still consider this well worth a download – not only for those interested in the Shadowlands-setting, but also for fans of shady back alley dealings – this module would e.g. also work well in conjunction with Streets of Zobeck.

My final verdict? Well worth your HD-space – 5 stars!

You can get this neat FREE module here on OBS!