A24: Return to the Crypt of the Sun Lord

A24: Return to the Crypt of the Sun Lord 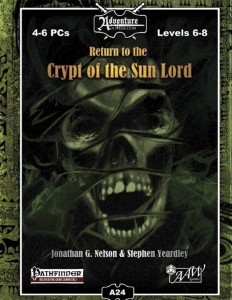 This module clocks in at 41 pages, 1 page front cover, 1 page editorial/ToC, 1 page SRD, 1 page back cover, leaving us with 37 pages of content, so let’s take a look!

It feels like yesterday when I first reviewed a module that was flawed, but had promise: A1: Crypt of the Sun Lord. The short level 1-dungeon crawl introduced to PCs to a nice little complex and provided some pretty easy challenges…but it also introduced us to the fascinating frontier’s village Rybalka, saw some improvement, and, more than that, it already exhibited what I consider the most crucial strength of AAW Games’ modules: A mix of action and brain-teasers and, more importantly, an admirable ability to depict cultures that feel “real” – yes, they feel alien and fantastic, but a sense of realism and detail suffuses the best of AAW Games’ works that can’t help but draw one into the diverse world of Aventyr….though, back then, the world had no official name yet. 😉

Since then, the company has grown by leaps and bounds, so let’s revisit the crypt of the sun lord and see what now can be found in the place where the PCs first hands on the mystical blade of the sun lord. It should btw. be noted that the blade of the sun lord, even when you have not played A01, will be found and gets full stats. Before you ask: Yes, this module works even better with groups that have run through A01, now to return here, though this is no requirement. But you may have already guessed that…

All right, still here? Great! The previously explored upper floor (with a graphically enhanced map) has seen better days – beyond bandits, a sense of dilapidation haunts these halls and thus, the PCs venture forth – and may find that a stair is not what it is supposed to be: The wards that keep a mimic in stair-form suspended in time are about to fall, thus adding a level of danger and eureka-effect to the exploration of groups that have braved A01 back in the day. In Ka’Teek’s final resting place, the PCs can now unearth a secret door that leads from the muck-filled, crumbling tomb to the halls below – and here, you’ll be blown away. No, really. The lower level not only sports one glorious full-color map, it also has a lavishly-detailed isometric version of the already beautiful map. And yes, the isometric map is full color and drop-dead-gorgeous. I’m talking about as detailed as back in Ravenloft, only in color! A key-less version of this one is provided as well, though I’d only hand out the respective rooms after the PCs have explored them – e.g. traps and the like can still be found on the isometric version’s key-less one. Still, this map is gorgeous and greatly enhances the sense of immersion – not that the module required that, mind you.

What do I mean by this? Well, first of all, the exploration of the temple of the sun, hidden here in these depths, does sport bulettes that have dug into the temple…but the temple also has an ingenious intrusion-countermeasure: The very doors of the complex. You see, the exploration itself is an interesting puzzle, with doors preventing the opening of others while open: Some doors can only be opened while others are open and some can only be opened when others are closed. While the puzzle can potentially be brute-forced by capable PCs willing to spend time and resources, exploration with it intact proved to be much more rewarding. I mentioned, in the beginning, the strength, as a company, to create a blending of the fantastic and realistic and indeed: From paralytic flees to spikes of searing light, this oscillation is well-represented in the hazards of this complex. On a cultural note, a fountain of balance that provides boons, but also dishes out pain to those dishonest – and yes, there is a clear and interesting logic to this test of a creature’s honesty, one that can be gleaned from experience and one that constitutes a great example of unobtrusive storytelling.

The temple also houses iron-pyrite clad guardian warriors and indeed, the interest of PCs and players and the understanding of the dynamics of the temple may prove to be helpful – for the challenges faced inside are nothing to scoff at: The respective combat encounters are interesting and dangerous with not a single boring one among them. PCs will thus be motivated to actually unearth the methodology of the temple’s beliefs – if they understand it, they are rewarded.

Things become, at least in my opinion, even more interesting once the PCs manage to bypass the crysmals and breach the sanctuary – for here, the runes of the ancient people are provided as inscriptions that the players can decipher. I really liked this section, particularly since I can fluently read runes and since we have a pretty simple letter-substitution, so no, your players won’t be flustered for a long time, even if they have no idea regarding the meaning of runes. Within the depths of the complex, a secret altar awaits, providing not only a glimpse into ages long past, but also offering perhaps one of the coolest boss fights I’ve read in a while: The blade of the sun lord can be used to conjure forth the spirit of Ka’Teek – when have you last fought an honorable LG spirit of an ancient priest-king with a blinding aura that also may yield you a better blade? Oh, and this is NOT the end – You see, the temple also hides Ka’Teek’s suit, which is the only way to handle the true treasure herein: The Sliver of the Sun. Unprotected exposure to this artifact can lead to many very dangerous effects – and the table of these effects also constitutes a great scavenging ground for more lethal exposure to radiation and the like.

What does the sliver do? Well, it friggin’ CHANGES THE CLIMATE. This may break a particularly nasty winter or make a summer truly devastating…and its weaponized use can carry whole campaigns on its own – the potential outcomes presented certainly suggest different ones and can be used by any GM worth his craft to make plentiful follow-up modules. In fact, this could easily be the story for a whole campaign, should you wish to go that route… And yes, if you don’t want such a game-changer in your campaign, you can easily destroy the item in a cataclysmic blast…which coincidentally, with minor modification, would make for a compelling adventure in the plane of shadows…

Conclusion:
Editing and formatting are top-notch, I noticed no problematic segments. Layout adheres to a beautiful two-column full-color standard and the pdf comes fully bookmarked with nested bookmarks for your convenience. The book offers a significant amount of gorgeous artwork and the cartography by Tommi Salama and Justin Andrew Mason deserve special mention: The maps are GORGEOUS. The inclusion of an isometric map (including a key-less version of it) render the map-material of this book, at least in my opinion, absolute top-tier; not only regarding 3pps, mind you.

But, know what? All of that wouldn’t be enough, were it not for the crucial part – the writing. Jonathan G. Nelson & Stephen Yeardley have surpassed themselves here: The core-authors of AAW Games deliver a perfect culmination of the development of the company in this module: With formal quality turned up to eleven, the duo has retained the unique feeling or realism blended with the fantastic, the fascination for these cultures that makes the module feel like exciting, fantastic and strange archeology. The inclusion of material to occupy one’s mind via several unobtrusive puzzles also improves the module’s feeling of diversity beyond the varied encounters and hazards. However, the true accomplishment here is, much like in Stephen Yeardley’s superb C07: The Sussurus Tomb, the fact that the players are rewarded for engaging in the indirect storytelling the complex offers.

If the above was not ample clue: I *LOVE* this module! It feels like a great culmination, at least up until now, of the development process of AAW Games as a company and the authors: While retaining the key-strengths of the captivating cultures depicted, the diverse challenges herein are much more streamlined than in previous modules. Better yet, the rewarding of players engaging the indirect storytelling as well as the inspiring end of the module render this one exceedingly well-rounded dungeon, perhaps one of the best in this size out there. My final verdict with clock in at 5 stars + seal of approval and a nomination as a candidate for my Top Ten of 2015 – a wonderful tribute to Cliff “CJ” Jones, to whom this module is dedicated.