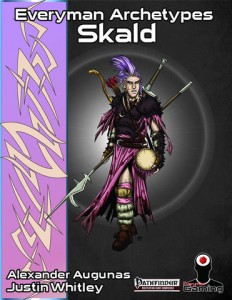 This installment of the Everyman Archetypes-series clocks in at 10 pages, 1 page front cover, 1 page editorial, 1 page SRD, leaving us with 7 pages of content, so let’s take a look!

This book begins with clearly stated explanations of the design-intent, ultimately helping not only the reviewer, but also, and more importantly, the reader – and soon afterwards, we dive into the archetypes. The first of these would be the Blood Skald, who replaces Scribe Scroll with Blood Vigor. More importantly, at 9th level, the archetype gains the ability to spend rounds of raging song in favor of temporary regeneration equal to the blood skald’s Str-mod. The intriguing component here, if that does not sound impressive, would lie in the additional benefits regeneration offers over fast healing and similar healing options. Furthermore, action-economy-wise, starting this as a move action (at 14th level: swift action; 19th: immediate action and spend 2 rounds for double effect) renders it a valid set-up that can be used quickly. This ability replaces DR. An interesting alternative – not something flavor-wise awesome, but the mechanics are interesting and change the way the class plays in an adequate manner.

The Chivalric Harbinger gets an order, but must necessarily adhere to the order’s tenets. On the rather cool (but also borderline “too powerful for some games”) level would be the fact that the skald gets order’s song, which lets him not only share teamwork feats via the song (provided he has Tactician), it also extends the order’s challenge benefit to the respective allies. While fitting in a high-powered game without cavaliers, this does somewhat cheapen the cavalier’s signature challenge’s effects, so please beware when using this guy – I know my players would be annoyed by having their unique tricks being made available easily to other characters. Additionally, 5th level and every 6 levels thereafter nets an order ability instead of spell kenning. All in all, a per se cool archetype that may be overshooting the target by a bit, also since being a bit front heavy.

The Jarl Extoller is interesting in that we get two variants of the archetype – one for the base skald and one for the cool unchained version introduced in Everyman Unchained: Unchained Rage. Instead of Scribe Scroll, both get a better aid another. At 4th level, the jarl extoller gets extolling song, which may duplicate inspired rage, controlled inspired rage and song of the fallen, but this special song is limited to one target – the song cannot be maintained at the same time as a regular raging song and draws on the same resource. Activation will scale from standard action to swift action, though inspired rage provides +2 Str and Con in addition to the regular effects when used thus: Basically, you focus on one target and increase the potency of your song. This ability, then, obviously is also one of the abilities that changes appropriately in the unchained version, instead pertaining to temporary hit points and melee attack bonus. Similarly, the 8th level nets an improved controlled inspired rage for the class, including appropriate scaling mechanisms depending on the chassis used. These abilities are paid for with (improved) uncanny dodge. All in all, a nice one – no complaints on my part, added flexibility – I like it!

The Rage Baiter gets Perform (Comedy) and can use it via versatile performance. At 6th level, the archetype may use raging song to antagonize enemies unwilling to be subject to the song’s benefits -while not required per se to use this archetype (this works on its own), I love the rules-aesthetic synergy with the stellar psychological combat-rules first premiered in its own pdf, now expanded and collected in Ultimate Charisma. This type of holistic design is really appreciated.

The showboat skald emphasizes acting and comedy over instruments via the modified skill-list and may extend the benefits of the Performing Combatant-feat to allies subjected to the inspired rage raging song. The showboat thus also gets a variation of versatile performance and performance combat feats that can be woven into the effects of the respective raging songs, also enhancing the checks by Str-mod at higher levels. I love this archetype – it’s inspired and absolutely flavorful in both style and execution.

The Unarmored Canter may add a scaling, Cha-mod-based (but also tied to the level regarding its scaling) bonus to AC (and CMD), gets no armor proficiencies, fast movement and better drumming/marching song. A cool one in theme and I like the archetype’s elegant scaling, but I still wished it had a bit more unique active tricks.

This out of the way, things get truly interesting -the final two pages of the pdf are devoted to equipment tricks for bells, drums, horns and general music instruments: From lucky bells to drumming on shields or the still-attached skulls of your fallen foes to detecting burrowing creatures via your drumming skills, these two pages are where the book truly shines: Not only are these tricks AWESOME, they increase the versatility of not only the skald. What about e.g. infusing a horn with a splash weapon? Yeah, this section is pure gold! The book also provides two solid traits.

Editing and formatting are very good, as I’ve come to expect from Everyman Gaming. Layout adheres to a 2-column full-color standard and the piece of artwork by Jacob Blackmon is nice – and this time, I’m positive the guys’s not a kitsune! (Or at least, he’s incognito…) 😉 The pdf comes fully bookmarked for your convenience.

Alexander Augunas and Justin Whitley deliver herein what I’d call function-archetypes – basically, we get archetypes that are less defined by a cool flavor or intricate web of new abilities, instead focusing on significant, but pretty much self-contained tweaks of the skald-class’s mechanics. This is not a bad thing in itself and the archetypes herein can be combined with others for that effect. The content provided in this book is solid and does its job well – and some of the mechanics are downright awesome to see. At the same time, they did not blow me away to the same extent some of Alex’s designs manage and I’m a bit weary of some choices made. This, however, is offset by the excellent equipment tricks-section; in fact, I liked the new tricks here so much, I’d consider them worth the very fair and low price of admission alone. So yeah, if you want to put more emphasis on the instrument, these two pages alone will more than justify this book for you. If, on the other hand, you are less interested in them, you’ll lose perhaps the coolest part herein, one of which I admittedly would have loved to see more of. In the end, I will settle on a rating of 4 stars.

You can get these neat archetypes here on OBS and here on d20pfsrd.com’s shop!