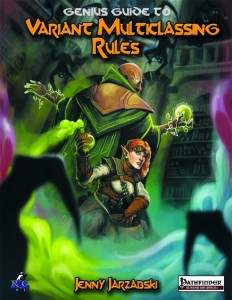 All right, in order to make this quicker than usual, I’ll break down what each secondary class offers by level – the first ability gained is linked to 3rd level, the second to 7th, and so on. This avoids me feeling like a redundant idiot and decreases the review’s bloat factor. Got that? Great, so here are the secondary classes!

Barbarian: This fellow gets rage, then uncanny dodge and then a single rage power (for purposes of which you can choose, you are treated as 1/2 level barbarian, for purposes of effects full); 15th level nets DR 3/- and 19th greater rage. Bardic characters get bardic knowledge, then bardic performance (inspire courage & competence) at -4 character levels, versatile performance, then lore master as a 5th level bard and finally, dirge of doom and inspire greatness. Clerics need to choose a deity (with all associated restrictions) and get the cleric’s spontaneous casting – but here, we have an issue: A cleric can “use [this] with any prepared casting classes that have the appropriate spells on their spell lists. I *assume* this refers to cleric spells being on their spell-lists, but I’m not sure; additionally, when spells on another class’s spell-list are a higher level than on the cleric’s spell-list, does the conversion of them into healing equivalents pertain in potency to the spell’s spell level on the cleric’s spell-list or to the spell level on the other class’s spell list? 3rd level nets a domain (including 1st level domain power; then, we get channel energy at -6 levels for 1+Cha-mod times per day (which improves to level – 4 and -2 respectively at 11th and 19th level) and 15th level nets the additional domain power.

Druids get druidic as a language and must abide by the code, then get wild empathy, at 7th level a companion at level -4 (11th level: full level), 15th level nets wild shape and 19th level extends the wild shape’s options to 6th level druid options. The latter could be phrased more precisely, since the base wild shape is not as precise, but that’s a nitpick. Can companions stacked upon another?

Fighters get the ultimate short end of the stick here – bravery and then armor and weapons training. Oh, yes, let me give up half of my feats for that. Monks get unarmed strike at -2 levels, evasion, then ki pool at -2 levels with 1/2 level points, then +3 AC and improved evasion. Paladins must abide by their code, then get detect evil and thereafter, lay on hands, 1/2 level times per day, at level -4. 11th level nets Smite Evil, then we get one mercy and finally, divine bond at level – 3. Antipaladins work, fyi, like the inverse…and don’t get a Cruelty but a mercy in a slightly confusing glitch. Rangers get track, then favored enemy, then favored terrain; both woodland stride and swift tracker at 15th level and at 19th level quarry; Woodland stride and swift tracker are gained pretty late here, though I get why. Rogues get trapfinding, then sneak attack (scales every 4 levels), then evasion, at 15th level uncanny dodge (Yay?) and then improved uncanny dodge. Sorcs begin play with a chosen bloodline, but no effects – the first bloodline power is gained at 3rd level, the second at 7th. 11th level nets Eschew Material or a bloodline feat and the last bloodline powers are gained thereafter. Wizards choose a school and then gets a familiar; the chosen school power is gained at 7th level (sans capstone bonus at 20th level), 11th level provides cantrips and 15th level an arcane discovery; 19th level nets the 8th level school power. All sounds familiar? You’ll see why in the conclusion…

So, that would be the core-classes and they probably have provided a good inkling of what to expect from this pdf – so from here on out, I’ll provide a kind of highlight reel for the rest of the classes, which include the APG; UM, UC and the ACG. Cavaliers get the tactician class feature at 11th level, which seems like a pretty solid place for the ability – similarly, solo tactics fo the inqui is pretty well-placed. Gunslingers lack the grit to actually use the one deed they get, unless they choose a passive one – something btw. extending to the swashbuckler. Oracles are a bit restricted – their revelations have to be drawn from a limited list, which is problematic regarding future-proofing and campaigns using many resources. It’s also odd that orisons are gained after revelations. The summoner’s eidolon is gained at 7th level. Ninjas are identical to rogues, with the exception that they get poison sue instead of trapfinding – sooner than the alchemist, btw. Samurai get the very powerful resolve-ability at 11th level, which may be too soon. On the plus-side, the investigator’s ability-dispersal here is pretty solid. Shamans get their spirit animals pretty soon.

Beyond the base-classes, the pdf also covers prestige classes. At 5th level, you may choose and thus lose the feats gained at 5th, 9th, 13th and 17th level, effectively locking you out of using variant prestige classes and dedicated variant multiclassing (see below) at the same time. EDIT: I’m always for transparency – one keen eye of a fellow Paizonian spotted me botching the previous sentence, with an annoying omission. This has been rectified. Mea Culpa and thanks for the catch!!

Conversely, these prestige variants still have (changed) prerequisites. Alas, things get confusing when spellcasting is thrown in, let’s for example take the Eldritch Knight: “At 5th level, he gains new spells per day as if he had also gained a level in an arcane spellcasting class he belonged to before adding the prestige class.” Why do I consider this confusing? Well, it makes perfect sense in the base PrC…hwoever, in this system, the character allegedly still belongs to the base class and gets the prestige components IN ADDITION, thus blurring the line between what class he belongs to regarding the gained level. This is further exacerbated by 13th level granting +2 levels of casting progression, which wrecks havoc with how the system works – the variant eldritch knight does not have the level penalty that would necessitate this ability in the first place. Similarly, shadowdancers can get Hide in Plain Sight as soon as 5th level, which is one level sooner than usual. The shadowdancer’s darkvision also fails to specify its range – I assume the default, but there are some deviations from it, so yeah.

Okay, where things get pretty tight regarding the mental gymnastics you need to perform is with the dedicated multiclass character advancement – mainly because the explanation of what this system does is extremely lacking: “With this system, characters can give up additional feats to further advance in their secondary class. This system must be used with the variant multiclassing system. Many of the dedicated multiclass options grant the ability to cast spells as spell-like abilities a limited number of times per day. These spells must be selected when the ability is changed, but one spell can be swapped out (losing the ability to cast an existing spell and replacing it with a new spell of the same level) at every odd character level. The character’s caster level is equal to his total level/hit dice.” Ohm, so what about classes that do not have more feats? What about those that have more, do they give up all of them? I have riddled my brain for 2 days now regarding how to interpret this and the table, which alternates “Secondary class feature” and “Dedicated secondary class feature” – I *think* I know how this works: Basically, you give up all feats, but get more class features of the class in question. Why the table notes them as separate entities sans explaining that is a bit beyond me. Think about it as the big brother to the previous system – you give up all feats, but also get more class abilities of the secondary class…though not necessarily sooner, with spell-casting usually working, as per the above, as SPs. Fighters add Weapon Specilization, Disruptive and Greater Weapon Specialization, but still maintain the sequence, when the base variant multiclass’s abilities are gained. While the table’s alternation is still unnecessarily confusing, the results are pretty decent, though the dedicated options obviously inherit some minor weaknesses from their non-dedicated counterparts – the poor gunslinger still doesn’t get grit, for example.

Editing and formatting are good, but not up to Rogue Genius Games’ usual high standard – I noticed more glitches in here and in a book of this complexity, that hurts. The pdf adheres to RGG’s no-frills two-column full-color layout (not the more beautiful, but also more ink/toner-consuming grimoire-style employed by other releases) and the pdf sports a couple of solid full-color artworks – which are beautiful. However, if you’re fan of Legendary Games, you’ll have seen almost all of the before in various books. The pdf comes fully bookmarked with nested bookmarks for your convenience.

I’ll address the elephant in the room first: Yes, I am aware that this is essentially a variant and expansion of Pathfinder Unchained’s variant multiclassing. While I’m not a fan of PFU’s take on the subject matter, the deviations made in this book do feel justified – and the expansions are, for the most part, welcome. At the same time, I really wished this went one step beyond and balanced the respective variant multiclassing options better than in PFU. While there are some minor improvements in the wording of abilities and details, there are also some unnecessary cut-copy-paste errors here; and I really wished the pdf deviated significantly from the very flawed variant multiclass balancing of the material introduced in Pathfinder Unchained. Fighter and Rogue, for example, once again get the short end of the stick and the monk’s benefits also are simply not that pronounced. What we have here, basically is erected on a flawed foundation. Granted, not one with crucial or crippling flaws, but still a foundation that could have used tweaks. What about e.g. archetype qualification via these rules?

I went into this book consciously NOT with PFU open right at my table and started picking this apart as per the my usual guidelines and what you see here is the result. This is by no means a bad book, mind you; in spite of its flaws, I consider it superior to Pathfinder Unchained’s basic version and it does cover a broader spectrum, so it has that going for it. At the same time, this book left me feeling like it had squandered a chance to truly streamline and improve the system – a more precise balancing between classes and a slightly tighter explanation of how the dedicated system works would have made this a truly legendary tome. As written, it is a solid system that Jenny Jarzabski has crafted, but also a flawed one. My final verdict will hence clock in at 3 stars.

You can get these multiclassing rules here on OBS and here on d20pfsrd.com’s shop!
Endzeitgeist out.