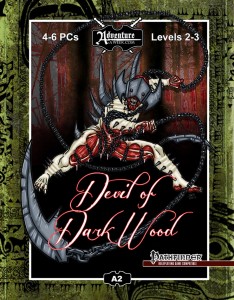 This being an adventure-review, the following text contains SPOILERS. Potential players might want to jump to the conclusion.

Still here? All right! Set on the Rybalkan peninsula of the setting, a place somewhat influenced by a clash of cultures between standard medieval people and the Viking-like Vikmoderes, the adventure presumes the following: A clan of devils has been stranded on the prime material plane and adapted to the place. Unable to return to the hells, they adapted and bred with humans too often, it seems – essentially, they degenerated and grew into their own secretive sub-race, sans e.g. the power to call reinforcements and with some individuals even leaning towards human behavior. A young devil  fascinated with humans named Bakinqa managed to learn their tongue and some of their skills and tried to communicate with them, only to have his father shot in front of his very eyes by a bolt of devil slaying, as the devil (obviously carrying the taint of human weakness) sacrificed himself to save his son. The young devil subsequently plotted vengeance and schemed for years. When he first witnessed a lycanthropic transformation, he knew that a potent tool had fallen in his hands – especially with the rituals depicted in a dread tome of lycanthrope control that enables one to control lycanthropes via fetish dolls and even share senses with them. Unfortunately for the devil, he has yet to find the name and whereabouts of his father’s slayer and thus has resorted to stealing a book containing the immigration records by proxy.

Brooks Balinger, a shepherd who has lost a sheep to the lycanthropes, couldn’t find his usual, now deceased hunters to take care of his problems (they’ve been killed as well) and thus hired another hunter named Woln – unfortunately for the hunter, he’s been captured by the devil and now serves as the infernal creature’s guinea pig in creating a new devil-werewolf hybrid.

The PCs, after having a tour of the village (including many paragraphs of well-written flavor-text and a fully mapped tavern that includes even a price-list) are hired to find the missing hunter Woln and additionally, the local sage Yuri Statel wants them to recover his stolen books. The investigation soon yields a piece of pelt and thankfully provides some red herrings with named villagers who also wear pelts. After some minor investigation, the PCs find a victim of the curse, who may be almost insane, but also a possible way to reach the cavern of the true master. Otherwise the PCs are in for a fight with a were-wolf. The ice-cold rain also conspires to make their sojourn rather unpleasant and thus, the cabin of Cual Beartooth, skilled herbalist, is a welcome place to rest. Very cool: The herbalist can craft 3 types of special salves, but also expects the PCs to help improve the fully mapped cabin/do chores – which they actually can! Even better, the salves all come with ingredients, lending a sense of fluff and consistency to them. Unfortunately, no craft-DCs or information on how to replicate them like market price etc. is given. In order to earn their stay in Cual’s refuge, they may have to do some chores, though – a  nice diversion here!

After their stay at the hunter/hermit, the PCs finally reach the ominously-shaped Devil’s Cave, where their adversary, a were-wolf slave and his hybrid – a true climax, and one easily adjustable by having one or more of the were-creatures change sides. The primary antagonist, the devilish alchemist, has access to extracts, bombs and mutagens, which is rather nice, even though I think the creature should have alchemist levels instead of getting the abilities of the class for free just “by having studied” it. As written, the statblock specifies no alchemist-levels. The finale per se is rather interesting and provides ways to adjust the challenge to your tastes. Even better, there’s a “it’s not over yet”-moment – the devil actually had a fourth fetish doll and thus, a fourth werewolf remains! Two sample ideas for continuing the adventure are given before introducing us to the dread tome that contains the knowledge to create the lycanthrope-controlling fetishes.

What still irks me, even though the origin story of Bakinqa has been vastly improved: The statblock does not use the correct devil-subtype-traits: Devils not only get a range-limited darkvision, they also see perfect in even deeper darkness. They are immune to fire and poison and don’t have a paltry resistance of 5 to fire. They have a resistance to acid and cold 10, not just cold 5. Per default, they don’t get a spell-resistance. Even if you take the cop-out and argue that this devil has degenerated, the modifications have made the subtype unrecognizable – I get that it’s a species of its own. But it should not have the devil subtype. outsider? Evil? Okay, but rules-wise, this is no longer a devil – it shares almost no traits with the devil subtype. I also don’t understand why the build does not specifically grant alchemist class levels to the adversary – all the class features are there, why not simply make him a base-race + alchemist-levels build?

Editing and formatting are good, I noticed some glitches à la homophone errors (bare/bear), though, as well as inconsistencies regarding a statblock which may or may not be intentional.

Layout adheres to Adventureaweek’s two-column parchment-style standard and has been vastly cleared up – this is so much better and crisper looking than its previous iteration.

The artworks are nice and the cartography is stellar. The pdf comes with extensive bookmarks and herolab-support and comes with hyperlinks to respective areas of Rybalka, Items etc. on the AaW-page. Nice to look more information up if you’re a subscriber! It should be noted that said links are optional only and all required information (and plenty of it) is contained herein.

All in all, the writing here is much more consistent than in “Crypt of the Sun Lord” and adheres to a mostly captivating and well-written prose. I particularly liked how herbs and ingredients are mentioned in some salves and the way in which the PCs may use their skills to improve a cabin as well as the sheer amount of detail provided for the village. The overall investigation, while easy to pull off, is well-presented and the environmental complications are neat. I also applaud the use of alchemist-rules. What I don’t applaud is the lack of information regarding the rules for the salves introduced.  The worst problem of this module was in its prior iteration an accumulation of terrible logic bugs and some clunky supplemental pieces of information, which have thankfully been purged. Indeed, as presented, A2 now actually makes sense and comes with a presentation that further improves it beyond its less than stellar first version to a point where I consider running it a fun endeavor. It is only rarely that one sees a publisher go back and improve a product to this extent and AaW’s crew has my utmost respect for revisiting and improving this one. However, aforementioned subtype-hick-up, the weird antagonist build and the minor editing glitches here and there remain. Still, in this, its vastly revised edition, I can wholeheartedly recommend this module as a nice wilderness/investigation scenario with fluff galore for low levels that more than deserves a final verdict of 4 stars. Kudos!