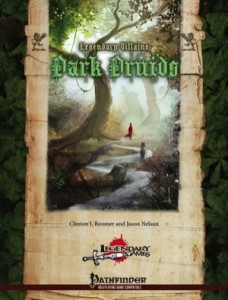 This installment of the Legendary villains series clocks in at 26 pages, 1 page front cover, 1 page editorial, 1 page SRD, 1 page ToC, 2 pages of introduction, 1 page advertisement, 1 page back cover, leaving us with 18 pages of content, so let’s take a look, shall we?

Okay, so first of all, the pdf takes the concept of “Shade of the Woodlands” and expands on it, essentially providing a kind of thematic continuation and exploration of the more sinister concepts associated with the umbrae tokens provided as part of this feat. But before we dive into the crunch component, the pdf provides guidance in a rather unique and helpful way – it guides DMs regarding the implementation of such a token on a conceptual level – how does it interact with Knowledge (religion), for example? What do they look like? Some pretty evocative imagery is quoted here and the token itself is linked to the Umbral Wood – think about this place as something akin to perhaps the fey’s First World blending with the Plane of Shadows, a primordial, savage echo…or something different altogether. The pdf provides advice on integrating this cool concept into your game before delving into the things you may reflect on regarding druids as villains – the motivations provided should definitely provide for interesting ideological rationales.

First up regarding the crunch would be the Darkwolf druid archetype – ad if you can’t tell by the name, the darkwolf can be considered a kind of pseudo-lycanthrope, complete with silver allergy and high-level werewolf-summoning. Unseelie Ovates receive modified proficiency and skill-lists. They can spontaneously convert spells into fey allure spells – or at least, that’s what the pdf states. Only problem being – there is, at least to my knowledge, so such spell. I assume, the pdf instead was referring to the Unseelie Arts, which provide modifications of the spell-list. These guys can also assume faerie forms via the new spells provided within this pdf.

The next array of components would be the aforementioned feat-tree based on umbrae-tokens – and these feats are both exceedingly awesome in concept (and their fluffy descriptions), but definitely should not find their way into player hands – the very first one provides free energy admixture (no level-increase, no need for preparation in advance AND it extends to abilities, though energy-specific additional effects may not be present any more), allows for wildshape into creatures of the fire subtype and allows for the casting of sympathetic wounds in place of 2nd level spells. Now yes, the feat also decreases your HP by one HD and the feat nets you light blindness and modifies the umbrae-token’s auras, but still – I don’t have to tell you that this is the legendary VILLAINS-series, right? Seriously, as awesome as the feats herein are, as glorious and evocative as they develop the concepts, be very, very weary of ever letting them even close to your greedy player’s hands… I know my players would wreck havoc with these. On a formal level, I do think that the reduction of HP should specifically specify that HD-dependant benefits are not modified by the reduction, but that is probably me being OCD.

Not all feats herein are themed around the awesome umbrae-tokens: What about a stronger, nigh-uncontrollable animal companion with rabies? Yup. Okay, this once again is not an option I’d necessarily let into player hands, but it is damn cool! Speaking of which – what about delivering touch spells at range in dim illumination and below? Yes, complete with disturbing mask imagery. Or what about a feat that allows you to expend a swift action to execute sneak attacks as a ninja of your class level -4 – no, no limit, but a prohibition of never ever talking to a those not of the faith.

The pdf also sports an assortment of new spells, with greasy, stealth-crippling algae or green slime or oozes being summonable via a very flexible spell or spells that conjure forth a spear of bloody power that drinks from your blood, but also provides significant benefits. Creating fey crossroads or a defensive lightning shield also is possible, as would be the option to incite grass to grow to provide more terrain control. Wyvern’s Watch would be an interesting variant of mage’s faithful hound, as another example.

Editing and formatting are good, though not as excellent as in most Legendary Games-products – I noticed a couple of typo-level glitches. Layout adheres to legendary Games’ beautiful two-column full-color standard as a established in Kingmaker-plug-ins. The pdf comes with full bookmarks for your convenience and the pdf does sport some gorgeous artworks in full color – original pieces, btw., though some may be familiar to fans of Legendary Games from other publications.

Jason Nelson and Clinton J. Boomer deliver herein -concept-wise, in spades. I’m a big fan of Clinton boomer’s writing (Read his “The Hole Behind Midnight” if you considered the last couple of Dresden Files to be toothless!) and his high-concept approach to design and focus on narratives well reflects on this villainous toolbox. Let me make this abundantly clear: I adore the utterly broken, overpowered feats that capitalize on the umbrae-tokens – the whole concept is so incredibly awesome, it is a narrative goldmine. Just about every feat in this category made me come up with at least one VERY nasty build. Now, and this should be emphasized, they are not perfect – could one for example kill oneself with the HP-reduction of these feats? Know what? I don’t care. Still, it should be emphasized that this is the VILLAINS line.

These options do NOT belong into player hands – which brings me to the somewhat schizoid feeling of this pdf: On one hand, the feats almost unanimously revel in their high concepts and obviously do not care about being balanced or the like – they are the nasty tools for which your PCs will LOATHE the villains. On the other, the spells and archetypes feel, pardon the pun, tame in comparison – to the point where I’d allow them in e.g. Way of the Wicked and similar campaigns. So yes, I couldn’t help but shake the feeling of these two halves not really jelling well with one another – in the end, I wasn’t perfectly sure whether to hand this to PCs on the evil spectrum or not.

Conversely, the content that does not directly tie in with the concept of umbral wood and umbrae tokens did feel like it was a different book to me – like two books had been smashed together. Now, don’t get wrong – this is not a bad toolbox by any means, but I do wish the awesome concepts had been tied more consequently together – what about token-exclusive spells, for example? Now yes, none of the components of this book are bad, but, ironically for a book on druids, this feels somewhat inorganic in its composition.

The result is a book that does provide some content with Jason Nelson’s trademark crunch-mastery and some content with Clinton Boomer’s balls-to-the-wall awesome concepts and high-end, high-concept crunch that left me craving more of both – I found myself wishing, that the high-concept content had received some balancing or at least advice for DMs. At the same time, I felt myself craving the objectively more balanced crunch to tie in better with the ridiculously awesome concepts. In short – I wished this pdf had a better internal synergy. Do I recommend this? For DMs, the intended audience, the answer is a resounding “Yes”, but one tinged with a fragment of hesitation. My final verdict for this book will clock in at 4 stars – just don’t let this fall into your player’s clutches unless you’re going for a ridiculously high-powered evil game.

You can get these dastardly druids here on OBS and here on d20pfsrd.com’s shop!