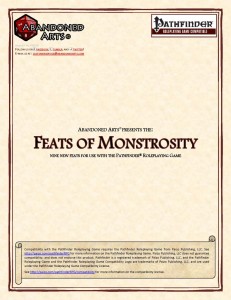 As always with pdfs of the “More Feats”-series, we get 3 pages – 1 page front cover, 1 page SRD and 1 page content, so let’s take a look at these feats that are intended for characters that have acquired monstrous abilities!

-Awesome Strike: Requiring Str 25, 1/round use Awesome Blow as part of your full attack. OUCH!

-Daunting Damage Resistance: Demoralize foes as an immediate action when taking no damage due to DR.

-Deny Channeling: +2 to saves if saving successfully versus channel effects; cumulative versus said source in 24 hours; Also nets you the same amount as bonus to intimidate.

-Flyby Snatch: Combine snatch with flyby attack  -awesome for the huge creatures that are required to use this feat.

-Gruesome Gaze: Creatures adjacent to you may not avert their eyes from your gaze attack. OUCH!

-Hazardous Hover: Creatures caught in your hover’s cloud of debris are dazzled sans save.

-Rancorous Resistance: When hit by energy against which you have resistance, you get charged by it, adding 1d6 to your natural/unarmed/touch attacks for one round.

-Regenerative Clutch: At CMB -10, disarm foes that hit you as an immediate action by having your regeneration grow over the weapon.

-Undying Rage: Gain morale bonuses granted by rage and channel resistance +2, even though you’re undead. Become staggered upon the end of the rage. Would be okay, had Kobold Press’ Advanced Races #2: Darakhul not provided a vastly superior take on undead raging via a feat.

Editing and formatting are very good, I didn’t notice any significant glitches. Layout adheres to Abandoned Art’s 2-column no-frills standard and the pdf has no bookmarks, but needs none.

Daron Woodson has created some feats that allow for truly dastardly tactics to drive the fear back into the players…however, prerequisite-wise, these feats see me troubled: The prerequisites could have used some additional racial caveats – as provided, I can see player characters qualifying for several of them and for player feats, honestly, these are too strong. A [monster]-descriptor or something like that would have helped there. The feats herein offer great options for DMs, but should remain out of the hands of players – and that’s about all I can say about this collection; Offering iconic options for nasty adversaries, this pdf clocks in at 4.5 stars, rounded up to 5 for the purpose of this platform due to the low price, the 5 only missed by a margin due to the uninspired undead rage feat and the relatively weak deny channeling.

You can nab these terrifying monster-feats here on OBS and here on d20pfsrd.com’s shop!