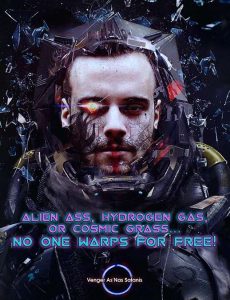 There is another thing you may want to be aware of: The layout is actually gorgeous, but has the text, at least in the default version, as white text on a colored background. This background sports a couple of white-ish/light blue spots in the lower third of the right side of the page. If you’re like me and prone to migraines, you may, for once, want to instead read the printer-friendly version – it has all the artworks and black text on white backgrounds. Thank the space overlords that we do get the choice here.

The pdf begins with an introductory fiction and then presents a method for character generation in 3 words/phrases. For anyone looking for even less rules and effort, this should do the trick, but ultimately, I fail to see the use. Not saying that this isn’t useful to some folks, mind you, and the author does acknowledge that, but yeah – it’s here if you play Alpha Blue pretty much like an almost-story-game with a GM. More useful would be the table of d30 alien philosophies, which do feature Venger’s irreverent, trademark tone. “Time is an illusion; lunch-time doubly so.” If that got a smirk or chuckle out of you, then you’ll probably like the humor.

The pdf then proceeds to provide more career options: Primitive screw head is for the muscle-for-brains folks, but the career doesn’t have any unique mechanics per se. The pdf also presents the quantum sorcerer, who gets one spell per level, of which 20 are presented. If you liked Venger’s “wave it away” type of spellcasting in Crimson Dragon Slayer’s latest incarnation, you’ll like this. As a person, I loathe that they have no proper descriptions, limitations, etc. – to me, this is the same type of competitive BS that makes me hate FATE with a fiery passion. On the plus side, at least you can cast each spell but once per day.

Bards and space rangers are presented – though there is nothing going on regarding rules here. Empaths are more interesting and can charm targets and measure the emotional temperature of targets, which may obviously backfire. These are really cool. Same goes for psychostrategists, who have a rather…öhem…unique initiation rite that permanently stains their crotch, courtesy of kool-aid tequila worms from the Habanero system. No, I did not make that up. These guys can foretell outcomes at the beginning of adventures. Nice one.

The pdf also sports optional rules for mortal wounds, pushing your luck, cowering behind obstacles or aiming. I’d strongly suggest thinking about adding a few of these, particularly if you’re planning on playing more than a one-shot with the Alpha Blue system. The pdf does briefly touch upon justifying PC capabilities and sports an interesting NPC profiling table that is somewhat funny in its misanthropy. Purple Prizm, the famous and delicious drink (name is always in its own font and purple in the pdf, btw.!), now gets a total of 8 different effects. 8 means to end a scene and 4 general ideas who the PCs are complement this section. It should be noted that the back of the book does contain a couple of extensive dressing tables – one for names of strip clubs porn shops, etc. (30 entries), 100 different generic tattoos, a table to determine body parts where stuff can be, a 100-entry table of flora and fauna, and one of 14+ futuristic prefixes. There is also a table of 12 means to encounter David S. Pumpkins.

This fellow features in one of the adventures/adventure-outlines within. As a general note, the modules don’t bother much with read-aloud text, but they do sport copious amounts of different tables.

All righty, this is as far as I can go without diving into SPOILERS. Potential players should jump ahead to the conclusion.

All right, only BDSMs (Bold Space Dungeon Masters) around? Great! So module number one is called “Sleazy Rider” and begins by entering a bar, where spacers and ladies (including a random seduction table) as well an alien (again with a table) are included; interesting: Female PCs can also get some action. Leaving, the PCs notice a gorgeous alien and get into a fight with the jealous boyfriend. Basically, the remainder of the module deals with the PCs trying to hawk the blue crystals that they ought to have by now – they stumble through the sleazy neon district, from pawn shops to strip clubs, and try t get rid of the hot goods. This has a very nice “night out in town” kinda vibe, an almost hallucinatory blur….or at least, that’s how this starts. Things do become more complex, when the krylons and zith enter the fray – nice bait and switch re tone etc. here! (As an aside: We do get proper stats for antagonists.)

“Resistance Disappearing” begins with an escort service, and prominent members of the resistance disappearing. The PCs will have to save their old acquaintance, the gaseous entity Acjo Suffae from a dictatorial AI called Zero Tolerance and its soldier drones. This one is basically a brief sketch.

“No Pussy for Old Men” has the PCs act as bodyguards for sex-workers – thing is, the cock-blocked targets are congressmen, and thus, some nasty assassins will need to be dispatched. After these, an elite squad will be sent – which is supposed to be superior, and the outline notes means for the PCs to triumph, but we get no stats for the squad, which is a bit annoying. “Shenanigans on Alpha Blue” takes place on the space station, and may have the PCs encounter the aforementioned Mr. pumpkin, sabotage or save a shuttle. “She Said, He Sent Assassins” puts the PCs into an Altered Carbon-like scenario, where multi-trillionaire Ziks Hardweek ostensibly is now broke, courtesy of his now-ex, Dyke-Star, but actually, the broke guy is…just a clone.

Editing and formatting re very good on a formal level. On a rules-language level, the pdf oscillates between being precise and providing proper stats and not doing so and championing more of a hand-waving approach. Layout is per se gorgeous and adheres to a 2-column full-color standard, though, as noted, I really appreciated the printer-friendly version this time around. The artworks include erotic photography and cosplay, cartoons and CGI-graphics of varying quality, ranging from excellent to okay. As a whole, this should be considered to be an aesthetically-pleasing file, at least if you enjoy looking at scantily-clad women. If you’re into men, you’ll get no eye-candy, though. The non-sexual full-color artworks within are also rather nice. The pdf comes fully bookmarked for your convenience.

Venger As’Nas Satanis provides some very helpful variant rules to add a bit of tactical player agenda to the game, and the various adventure-sketches and angles are per se well-written, interesting and funny in a way. At the same time, the supplement misses the chance of making all careers equally interesting or relevant from a mechanical point of view. Apart from the first adventure (-sketch), the vignettes this time around all clock in on the short side of things, often being basically a short sidetrek, and not more. This is per se not bad, mind you, but I couldn’t help but feel like quite a few of these angles deserved a bit more.

If you’ve been enjoying the Alpha Blue supplements released so far, then this will provide more of the theme and style you enjoyed; personally, I do think that Battle Star: Trek Wars was a bit more ambitious regarding the adventure outlines within. That being said, the first adventure outline, the one where Venger does become ambitious, may well be the best one he’s penned for Alpha Blue so far! As a whole, my final verdict will hence clock in at 4.5 stars, rounded up due to in dubio pro reo.