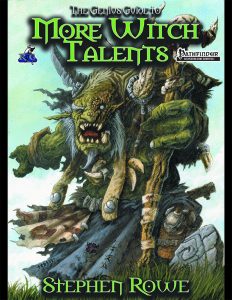 The inevitable expansion book for the talented witch clocks in at 25 pages, 1 page front cover, 1 page ToC, 1 page editorial, 1 page SRD, leaving us with 21 pages of content – quite a lot, so let’s dive in!

After getting once again the patented wall of text (which also categorizes them by utility) before diving into the new edges – and there are no cookie-cutter edges in this one – we begin with the complex (and awesome) curse bag: An item-class into which the witch can put all kinds of nasty curses and enhance them – these enhancements are concisely codified by the item’s spell level increase for creation purposes. Utterly iconic, seen in fiction and opens a ton of cool tactics and tricks – Brilliant! Cooler still: Being a curseslinger and firing cursed bullets at your foes! Yes, using curse bag rules. SO. AWESOME. I’m going to adapt that item class for my etherslinger in my home game… Gaining the ability to summon either infernal or celestial servants (somewhat akin to a summoner lite is also interesting – unlike regular spellcasting for the talented witch, these do scale! Oh, and what about witch’s curses, similar to those gained by oracles? Nice selection here!

The pdf obviously also features talents – a lot of them. But can they maintain the level of coolness of the edges? Well, let’s take a gander: We get some talents that are conservative, but also novel for the witch class – like arcane school specialization. Okay, I see you not being impressed here? Well, what about better crafting of cursed items? Now that one has some serious roleplaiyng potential.

Oh, and there is a rather supernatural-ish talent in these pages as well: Cremate. This hex lets you touch and disintegrate bodies, potentially also dealing significant damage to the incorporeal undead spawned from them! Enhancing wall-spells to also require Will-saves to attack, dispel, pass through etc.? Now that makes for nasty crowd control! Truly evocative (and a bit disgusting) – what about having a seeping wound that also acts as a bag of holding?, increasing in storage capacity? Gaining a spirit servant à la unseen servant or being able to bestow a benevolent blessing on targets – we get quite an array of diverse, cool tropes in this pdf. And yes, included are proper outdoorsperson-style talents, transforming arcane spells into psychic spells, being very hard to topple…or what about witches that enhance the checks of nearby sailors? What about having a key, which, when once used to open a lock, can unlock/lock the respective lock as a standard action? Oh yes, this *is* narrative gold.

Among the major talents, animating a creature’s shadow or temporarily rendering a willing creature undead (!!!) certainly sent my mind spiraling regarding some unique tricks you can pull off with that – both as a GM AND as a player…Holes in the rules like the lack of overland flight object-hexes (come on, you know the stories about the Blocksberg, right?), becoming a carrier of diseases and an area of countermagic. What about a curse that forces the target to either lie or tell the truth? Or creating hard to pass demarcation lines? Punishing creatures trying to teleport away? Oh yes. If a witch has a spirit serving her, she may, as an immediate action, cause the spirit to grant herself or an ally 25% miss chance (50% when fighting defensively)…damn cool. As is a curse of gullibility.

Have I mentioned the option for benevolent witches to provide atonement? Or curse a target to suffer aggravating delays? What about being able to use herbalism and long-term care to duplicate spell effects? Notice something? Yep, these are exceedingly unique and brim with pure awesomeness and narrative potential! Binding oaths, flexible energy resistance, causing groups of creatures to fall into a berserker rage…frickin’ yeah!

Okay, so what about the grand talents? 25 such grand talents can be found in this book. Being savvy in all kinds of esoteric knowledge thanks to ancient whispers, blessing targets with madness, uttering blood curses, immortality, geas-fate-control, 1/day auto-resurrection for witches of the death patron…heck yeah. (Particularly since the death patron sure could use a powerful upgrade like this…) Oh, and witches can have their own dominions, wherein they have limited control over reality! All those cursed forests and kingdoms? Yep. Do it yourself! Rapid aging curses can be found as can one find means to jijack mind-affecting effects, becoming a holy avatar…and have I mentioned the wall of force that can ONLY be broken by artifacts? What about cursing a target to become invisible and silent to all those they care and love? Know the Simpson’s monkey’s paw episode, where the “things turn out the worst possible way”-aspect is so aptly illustrated? There’s a talent for that as well. Ever wanted to crush your resistance with a giant hand of stone or travel through the lightless void of space? Talents for all of these and so much more are in here. Oh, and yes, gaining a true name. One where you ALWAYS know who utters it. And the reverse-aging curse is in here as well. Obviously.

Editing and formatting are top-notch, I noticed no glitches. Layout adheres to a 2-column full-color standard and the pdf comes with several nice full-color artworks, some of which I haven’t seen before. The pdf is fully bookmarked for your convenience.

Stephen Rowe is a bit of a phenomenon in my book. The output of qualitatively high material he maintains seemingly effortlessly is staggering. But there is more to him as a designer – for one, his craftsmanship is exceedingly good. I only very rarely find anything that can be abused in his work. His wording is precise, he is kind and open to feedback…and his work-ethics, as demonstrated by the talented witch, are impressive. Quite frankly, I wouldn’t want to design a “talented”-book. I like them, don’t get me wrong – but they are capital letters WORK – this much I certainly can attest to from my own design experience. Anyways, his talented witch was an excellent example of great craftsmanship. I was honestly more excited about this one, though. Traditionally, the “more talents”-companion books have fluctuated a bit for me in term of whether I like them or not – but I was pretty positive, Stephen would excel here. Why? Because he has a gift for evocative crunch.

You know my old spiel about how design is both a craft and an art, by now, right? The thing is, Stephen has a mastery for the art-component as well. Where a lesser designer would slap down an SP and call it a day, he takes basically a spell, wraps it in neat prose, adds an evocative concept, weaves gorgeous fluff around it and then does something radically different to the crunch, something that sets it apart, something governed by the evocative concepts provided – to the point where you read a book of crunch and don’t just start thinking about builds, efficiency, numbers and minmaxing an efficient character…you think about the story, the narratives you can weave. You are, in short, inspired by the book. This humble little pdf is one such offering, a stunning little gem that is simply…wondrous.

All those tropes are here, all the things you never knew you missed. It’s beautiful. And this does NOT mean that this is bland from a crunch perspective – far from it! I *need* to make curse-bag/bullet-specialists after reading this. Seriously. It’s almost a compulsion. I was thoroughly bewitched (haha! I’ll slap myself for that later…) by this pdf. This breathes the spirit of fairy-tales and even if you’re not at all interested in the base talented witch…well. This book is honestly an excellent reason to get it. I’m not kidding and not engaging in hyperbole when I’m saying that this is by far the best selection of witch material I’ve read for PFRPG. And I’ve read quite a bunch. Superb, evocative, cool – my final verdict will clock in at 5 stars + seal of approval and I nominate this as a candidate for my Top Ten of 2016. I got more inspiration out of this book than out of the last 20-or-so witch-option books/witch-option-containing books I’ve read.

You can get this absolutely inspired book of supplemental options here on OBS and here on d20pfsrd.com’s shop!

Oh, and Stephen Rowe currently runs the massive kickatsrter for the talented bestiary – which you can find here, so join this monster while you can – only a few days left!