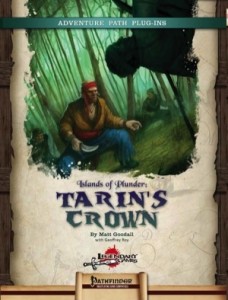 Wait, before we go into the details – what is this series about? Well, essentially, the Islands of Plunder-sub-series is a part of expansions intended for the Skull & Shackles AP, providing sidetreks etc. on an island per island base – they can essentially be considered island-focused mini-adventures that work just as well within the context of a Freeport campaign, Razor Coast or Savage Tide – if it’s remotely pirate/island-themed, these will work – and probably beyond that, but that I’ll take a look at on a case by case basis.

In this case, should you wish to plug this into the AP, situate it between adventure #2 and #3; Its intended PC level of 6 makes it predisposed for early use in RC. It should be noted that the module contains handy scaling suggestions to make the module appropriate for levels 5 and 7.

Still here? All right! The deadly island once known as “the Crown” has been developed into the base of the dread pirate Red Skewer Tarin – this notorious pirate seems to have stolen the notorious Pirates Queen’s Pearl. Worse the man has obviously refused to face up to his deeds and even an embargo of the island has so far yielded no results – the man refuses to leave his siege weapon-equipped tower. His paranoia evident, he has even exiled his first mate and a bunch of his erstwhile crew, so infiltrating his hide-out will not be easy – whether by combat or parley with Tarin’s erstwhile subordinates, it’s up to the PCs on how they want to handle navigating into the sheltered bay and reach the tower without being pelted to death by the catapults. On the nitpicky side – the man in charge of the catapults has no Knowledge (engineering) or Siege Engineer-feat, which means the targeting check is off – BAB +4, Int-mod +3,+6 for firing at the same spots, -4 for not being proficient with the weapon; which would mean +9, not +8, without range-increment penalties. I may be missing something, but yeah. That being said, this does not impede the functionality of the module and probably is just me noticing a minor flaw.

If the first response of the PCs was to enter the jungle and trek through this green hell, good luck – deadly plant predators roam the jungles – vegepygmies, assassin vines and dangerous mold all prosper on the island. Worse, some of the aforementioned vines are even toxic!

Infiltrating the tower and defeating Tarin, his remaining crewmates and his navigator can result in the PCs inheriting the deadly island and the burden of the artifact – and all the people who want it! The pearl turns out to be a pretty unique and cool reward for overcoming the solidly designed adversaries.

Matt Goodall and Geoffrey Roy have crafted a cool little sidetrek with a unique reward, a neat, dangerous fluff and build-wise, the use of multiclassing and archetypes help make the adversaries memorable. This is a production-value-wise glorious sidetrek for the small price and a thematically fitting sandbox that is easy to run and generally, I did enjoy the trip to Tarin’s Crown. That being said, I do wish the dangerous island had more hazards and deadly adversaries for the PCs to face, a tad bit more unique options – perhaps deadly pollen, plant-based haunts, something like that to increase the mood setting before facing off with the main antagonist. Especially the cool defenses of the tower could have used a more pronounced chance to shine. That being said, consider this me complaining at a very high level. My final verdict will clock in at 4.5 stars, rounded up to 5 due to the awesome production values.

You can get this lavishly mapped sidetrek here on OBS and here on d20pfsrd.com’s shop.