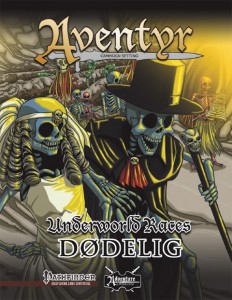 This installment of the Underworld Races-series clocks in at 21 pages, 1 page front cover, 1 page editorial, 1 page ToC, 1 page SRD and 1 page back cover, leaving us with 16 pages of content, so let’s take a look!

We begin, as always for the series, with the epic stories of the cataclysms that have shaped Aventyr’s underworld, before delving into the race-specific history of the dødelig. So, what are they? Well, the short answer would be that they are the vessels and creation, the last-ditch gambit, of Aventyr’s first lich – cornered by the crystalline, undead-loathing colloid, the lich tore himself asunder and spread his essence into the petrified skeletons of halflings his familiar had unearthed. Thus, the dødelig were born, and yes – they managed to escape the certain annihilation under the crystalline gleam of the colloid.

They scoured the underworld, finding more skeletons and awakening them, guided by the sundered remains of what remains of the dracoprime. Now interesting would be the very fact that these guys are not evil, maintaining mostly the behaviorisms and hearty nature of their parent race. The cover provides a good impression here – I try to picture them as what would happen if the glorious día de los muertos (seriously, if you can, at least once go to Oaxaca to celebrate that!) met with halflings and were extended for all the time – after all, these guys do not have to plow or sow anymore…

The dødelig receive + 2 Dex and Wis, -2 Str, are small and undead (cha instead of con-mod, immunities to bleed, mind-affecting effects, death effects, disease, paralysis, poison, sleep, stunning, nonlethal damage, ability drain, exhaustion, fatigue, energy drain, damage to physical attribute scores or effects that require fort-saves, unless they also affect objects) – yes, the full list. As undead, they are immediately destroyed upon reaching 0 hp or below, get darkvision 60 ft. and a movement rate of 30 ft. They also receive DR 5/bludgeoning, stonecunning and their petrified body can be affected by spells dealing with stone, potentially causing nasty damage and slow. They may also, 1/day as an immediate action, benefit from positive energy as a though they were alive – only for 1 minute, but still. They also suffer from light blindness and exposure to sunlight deals 1 point of Cha-damage per hour – no save. Ouch. So, what do I think about the dødelig’s crunch? I honestly consider them to be a bit too front-ended regarding the array of full undead immunities. While this is counterbalanced somewhat by the fragility (0 hp = dead) of the race and the light-based detriments, the race is also limited by the former – but more on that later. So are they strong? Yes. Are they broken? No, not really, but they may be too strong for the grittier of groups – when all is said and done, though, they should not cause grief in most groups and thus are one of the few undead races that kind of get it right.

The racial favored class options provided are neat and relatively unique in that they provide negative energy bonus damage, for example. The alchemical items, including performance-enhancing bone xylophones and obsidian bullets that render slings more valid also are pretty neat.

The dødelig feats provide for means that you will want for your adventuring undead halfling -from options to freeze-style conceal yourself exceedingly well in rocky environments to help when disguising as a living halfling, these are very useful. Dødelig who opt for the racial bonus to skills granting feat that represents memories of an old life may also learn to alter self to assume temporarily the semblance of the living form of their former life. Two secondary claw attacks at 1d4 also exist here and one feat increases the amount of gold you start with and how much you tend to find.

By using ground dødelig remains, you can suppress magical auras (but not the magic) and there also are items to hide your undead nature from detect spells, increase your necromancy or cause those listening to dance akin to a certain irresistible dance. Dødelig also come with 4 spells – one to detect dødelig at greater range (and stone – you have to free your brethren!) and one to fuse with other undead to turn into a larger-sized bone-conglomerate – nasty! A spell to create dødelig from living halflings and one that makes you count temporarily as a halfling can also be found here – they are solid, but did not blow me away – as a note, though: The dødelig-transformation spell could make them quite an eerie threat: When famine or disease rage through the lands, transformation into a skeletal undead may seem like a good idea…

Now if the feats and racial weaknesses have not been ample clue – this race has a pretty hefty investment tax to work well in some contexts – the 3-level racial paragon-class Day Rambler can be considered such an example. The class receives +1 BAB over the levels, +3 fort-and will-saves, +1 ref-saves and +3 natural armor. The class nets d10, 2+Int skills and caps the amount of damage the dødelig can take per day at 3 minus the number of day rambler levels. The ability that makes them temporarily benefit from positive energy also is enhanced and lasts longer, they lose light blindness and get sharp hands as a bonus feat – or increase the damage die by one -for a base damage of 2d4, which is slightly odd, since usually, there would be a dice-step-progression à la d4 -> d6 -> d8 etc.

Editing and formatting are very good – I noticed no significant glitches. Layout adheres to the beautiful 2-column standard established for the series and Jacob Blackmon’s gorgeous, original artwork is neat. The pdf comes fully bookmarked for your convenience

So, by all means, I should not like these dødelig-guys – I’ve been pretty vocal about my dislike for massive hidden character-resource taxes, like the one that warrants the existence of the 3-level paragon-class. I’m also not known for much leniency regarding races that get access to the massive array of undead immunities – but here, much like for Kobold Press’ darakhul, the detrimental effects are required to render the huge slew of immunities worthwhile without upsetting the balance. The dødelig that wants to work flawlessly in a regular society will have to think fast and out of the box – but that works with this race rather well.

Know what I love about these guys? In spite of the grim background story, in spite of being undead – these guys are surprisingly fun and playful, exhibiting one of the strengths of Mike Myler as an author – what my group tends to call fundead. Are they perfect or as culturally distinctive as some of the other races in the series? No, but they rock – pun intended. These stone skeletons are cool, if limited. I really wished they had less immunities and less of a general ability-tax/character investment required to render them operable in the surfaceworld, though – in regular campaigns, players will need to carefully plan to make these guys work and for some low-end campaigns, they may be a bit much. And I don’t get why the undead traits aren’t spread over the 3 levels of the paragon-class – it imho would make sense to strengthen the ties towards undeath and the stone-nature of the dødelig would make for a nice rationale for such a decision, while also putting player agenda higher on the list: Want to play a halfling skeleton? Here you go. Want to play a halfling skeleton with full undead immunities? Here are a couple of levels of racial paragon… What I’m trying to say is – this is not perfect, it’s not for every group and it could have been a tad bit more streamlined – but it remains a surprisingly well-crafted book that presents the first non-grim/dark undead PC race. Hence, this is a good book for me – well worth a final verdict of 4.5 stars – and since I have a policy of in dubio pro reo, I will round up.

You can get these uncommon fundead here on OBS!