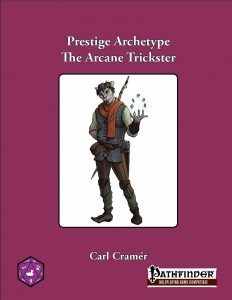 This installment of the Prestige Archetype-series clocks in at 11 pages, 1 page front cover, 1 page SRD, ~1/2 a page of editorial, leaving us with 8 1/2 pages of content, so let’s take a look!

The arcane trickster in its base class guise receives d8, 4+Int skills per level (OUCH), proficiency with simple weapons + hand crossbow, rapier, sap, shortbow and short sword, but not with any armor (which interferes with casting) as well as prepared spellcasting from the wiz/sorc-list of up to 6th level.The class has 3/4 BAB-progression and good ref- and will-saves. Spellcasting begins at first level with only 3 cantrips + 1 1st level spell and both scribe scroll and trapfinding are relegated to 2nd level. The signature ranged legerdemain is granted at 1st level, though – thankfully!

At 3rd level, evasion and sneak attack are gained, with the latter scaling up by +1d6 every 2 levels thereafter, to a maximum of +9d6. At 4th level and every 4 levels thereafter, the arcane trickster receives a rogue talent, with a list of thematically appropriate talents being provided – this list also constituting a potential way for DMs to balance the class versus the base rogue – just limit the class to the talents provided. Now what’s pretty odd – arcane bond is gained at 6th level – which isn’t weird balance-wise, but the additional imposed requirement to make concentration-checks to cast sans the object makes no sense in this case as opposed to regular casters gaining it at 1st level – so far the arcane trickster could cast without it, so where’s the dependency coming from? See, that’s one issue with re-appropriating such components and one that imho should be addressed.

Tricky Spells (free silent and still spell) is learned at 6th level 1/day, +1 every 3 levels thereafter. Impromptu Sneak Attack is gained at 10th level, 2/day at 14th level. On a nitpicky side, the ability works with ranged attacks and thus circumvents the usual range-restriction for sneak attack.

At 14th level, surprise spells are gained, with sneak attack of the spell’s damage type being added – the original’s potential ambiguity regarding the use of magic missile etc. unfortunately remaining. To spare you the research – it’s only added to one target of AoE-spells, one magic missile, etc. – no spamming of sneak attack. And then there’s the potential confusing with spells that can have a crit modifier greater than x2 – while there aren’t many, they exist – so sneak attack bonus damage x2 or x3?

At 16th level, advanced talents enter the fray – now so far, I’ve kept quiet about talents and they do represent an interesting selection from both Paizo-core and 3pps, including the advanced talent option to temporarily render a sneaked target incapable of executing AoOs. Per se, a cool array, including less costs for trapsmithing hide in plain sight and dispelling attacks. At 18th level, the arcane trickster can become greater invisible as a free action as a spell-like ability for class level rounds/day.

The pdf comes with FCOs for the core races and a sample NPC-build at 1st, 5th, 10th and 15th level.

Carl Cramér’s arcane trickster can be considered one of those prestige archetypes that immensely benefit from being changed to 20-level-classes – let’s face it, making the arcane trickster a PrC was always a sucky move, forcing the player to play two totally disparate classes before finally getting to do what s/he wanted in the first place. So yeah, I *really* want to love this prestige archetype – it’s generally pretty well-crafted, but it does have some rough edges – like the lack of a capstone. The weird arcane object-design choice or the impromptu sneak attack-range glitch, the lack of streamlined wording for surprise spells…all of these conspire to drag down what generally is a great class – and usually, I’d go 3 stars. BUT, this is the arcane trickster I always wanted – pretty strong and capable, perhaps too much so in certain campaigns. I’d certainly advise DMs allowing this one to restrict its talent-selection vs. rogues in order to maintain some reason for the latter to exist. That being said, I do consider this a pretty good, if not perfect take on the arcane trickster, well worth a final rating of 3.5 stars, rounded up to 4 for the purpose of this platform.

You can get this solid take on the arcane trickster as a base class here on OBS and here on d20pfsrd.com’s shop.
Endzeitgeist out.