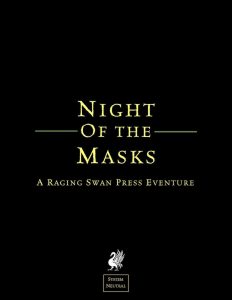 The night itself is structured in 4 phases, which should not constitute spoilers: First the guests arrive, then the nobility, then some politicking is done, and then we have the unmasking; much to my pleasant surprise the order of arriving nobility is presented in detail (that’s important, after all!), and 10 supplemental minor events allow the GM to spice up things easily and without much fuss. The  supplement also includes a couple of rather nice more fleshed out events, which include nobles with uncommon tastes, mask-switcheroos and what may or may not be a case of poisoning. 9 specific guests of interest come with more detailed descriptions, including read-aloud text and, in the instance of a few, a general notion of their alignment, age, gender, race and class + levels. These referenced names do include the terms “wizard” instead of “magic-user”, just to note that for the purists among my readers.

…so, all cool and dandy? Well…no…not quite. You see, I can’t complain about an absence of things accounting for interaction with rules and magic in this system neutral iteration, but I can’t help but feel that addressing, at least in some form or another, the etiquette of magics and magic items would have elevated this supplement even in this iteration.

Editing and formatting are very good, I noticed no serious formal hiccups or rules-language issues; this being system-neutral, there are no real rules here, just rough frames of reference. Layout adheres to Raging Swan Press’ elegant two-column b/w-standard, and the pdf comes in two versions, one designed for the printer, and one made for screen-use. The pdf is fully bookmarked for your convenience. The player-friendly map is not included in the download.

And yes, this is, by far, the best of the three versions, because it is system neutral and not burdened to the same extent with the necessity to account for player characters with expanded capabilities. And yet, my central point remains even in this iteration: The lack of rules or acknowledgement of the magical capabilities of the party does hurt this supplement.

The hard thing in roleplaying was never to pull off a mundane masquerade, it was pulling off a masquerade in a magical world. Now, if you’re playing a rather gritty game with few magics anyways, then this’ll be an excellent investment for you. If not, then you may end up bemoaning the same things I did.

While, for me as a person, this is closer to a 4 than a 5, I have to account for other tastes and my in dubio pro reo policy; hence will round up from my final verdict of 4.5 stars.

You can get this masquerade here on OBS!