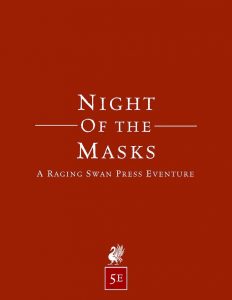 The night itself is structured in 4 phases, which should not constitute spoilers: First the guests arrive, then the nobility, then some politicking is done, and then we have the unmasking; much to my pleasant surprise the order of arriving nobility is presented in detail (that’s important, after all!), and 10 supplemental minor events allow the GM to spice up things easily and without much fuss. The  supplement also includes a couple of rather nice more fleshed out events, which include nobles with uncommon tastes, mask-switcheroos and what may or may not be a case of poisoning. 9 specific guests of interest come with more detailed descriptions, including read-aloud text and, in the instance of a few, a general notion of their alignment, age, gender, race and class + levels. The majority of NPCs just use the 5e-default NPC-roster as reference stats.

…so, all cool and dandy? Well…no. This is, in effect, a system-neutral supplement that eschews doing what makes masquerades hard to run, and I’m pretty sure that this won’t survive contact with some groups. Night of the Masks commits one cardinal sin: It doesn’t account for magic or the rules of the game pertaining to magic. So, poison-scenario. “Damn, I cast detect poison and disease!” And there goes your political intrigue. …and show me the group who attends a masquerade and isn’t paranoid enough to at least have that level 1 ritual ready!

Thankfully, the supplement in 5e fares better than in PFRPG: The amount of NPCs referencing default NPC-stats means that one does have proper references regarding rules-components, so that’s a good thing. On the downside, the NPC involved in the mask switcheroos would have assuredly benefited from, you know, having stats to reference (they don’t), or at least a value for their Deception skill given.

Editing and formatting are very good, I noticed no serious formal hiccups or rules-language issues; the latter primarily due to the absence of these elements. Layout adheres to Raging Swan Press’ elegant two-column b/w-standard, and the pdf comes in two versions, one designed for the printer, and one made for screen-use. The pdf is fully bookmarked for your convenience. The player-friendly map is not included in the download.

The lack of rules or acknowledgement of the magical capabilities of the party in the context of the 5e game does hurt this supplement, though not to the same extent as in the PFRPG-version. While I do think that this may be a coincidental side-effect of the default-NPC-referencing, I do have an in dubio pro reo policy, and frankly, this works better in play than in PFRPG. As such, considering the low-price, my final verdict will be 4 stars.

You can support Raging Swan Press here on patreon!