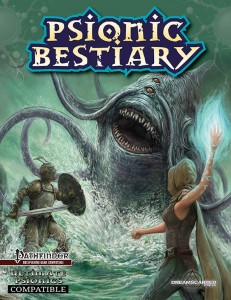 First of all – this is a massive bestiary and as such, I can’t go into the details of every creature herein without bloating it beyond belief. Additionally, I have reviewed the ongoing subscription (with the exception of ~2-3 installments, I think), so if in doubt, there are some reviews in the ether that are more detailed regarding the respective creatures. Finally, if you’re like me and have accompanied the evolution of PFRPG’s psionics, then you’ll notice that Ultimate Psionics no longer featured monsters – well, that’s why this book exists – handy player/DM separation by book – nice.

We begin this book with some explanations on how psionic creatures work, what to look out for etc., before 2 new feats that are used in this book are depicted – the aberration-only feat that nets you acidic blood, plus one 6-rank-prerequisite feat that allows the creature with it to avoid detection by e.g. blindsight etc. – while I get the intent behind the feat and applaud it, I do think that different abilities should add different bonuses to the perception-check for fairness’s sake – after all, quite a feat creatures are very much dependant on blindsight and more often than not fail to invest ranks in perception. Now rest assured that this is a VERY minor nitpick and will not influence the verdict, but I’d urge DMs allowing this feat to take a look at eligible creatures and potentially reassign skill-ranks.

All right, got that? Neato, then let’s dive head first into the array of psionic creatures presented herein – and, as per the tradition, we begin with the iconic astral constructs and all the table to customize them…but I assume you’re familiar with these guys. Much cooler would be the psionic inevitables, the automata – crystalline machinery, deadly tricks, a regeneration only foiled by sonic damage…these guys are nasty and the direct foes of aberrations and similar creatures!

Classics like the crysmal, caller in darkness, folugub, psion-killer or cerebrelith can be found in these pages as well, though more often than not, I have to admit to by now simply having a higher standard for monsters – when compared to quite a few critters herein, the “classics” feel a bit conventional at times.

Now if you’ve followed my reviews, Hellfire aura-bearing devils, cerebremorte undead, beetles with a truly disturbing life cycle and brain parasite worms may sound familiar – and if you haven’t encountered them, the phrenic hegemony, heirs to the illithids, may very well be the more disturbing (and complex) type of creature – they were awesome in the WiP-pdf and by now have more artworks – and these are simply awesome. Speaking of awesome – when I complained about the polearm masters of the Pyn-Gok race not getting any cool signature tricks via their plummage, I was heard – they now have quite a bunch of cool additional tricks! The T’artys have alas, not received a similar treatment – they still are ye’ old mischief-causing fey, only with psionics. *shrugs* Their artwork ahs been upgraded, though!

A nod to Forgotten Realms’ Saurians can be found in this pdf alongside some delightfully demented plant creatures -from the classic udoroot that now has some actually unique tricks to strange, mouth-studded trees, many of the artworks perfectly drive home the utter weirdness and partially alien flavor of psionics – take the humanoid plants with EYES, the Iniro. One look at their nightmareish artwork and you’ll know you want to use these fellows! The Mindseed Tree is no less disturbing to me and just a fun adversary as well!

Dreamborn, colossal magical beasts adrift in the ether, the last members of a dying race, a strange array of mutated creatures that have been driven insane by a cataclysm, only to endure…how? Upon death of one , another member of their race hideously splits in two… The crystalline shackle using Dedrakons and similar hunters make for iconic magical beasts as hunters that work well in a context of a given world requiring appropriate predators.

And speaking of predators – beyond the awesomeness that is the phrenic hegemony, we also receive examples of psionic apex predators – psionic dragons. A total of 5 dragon types are provided – all of which radically different from the gem-dragon tradition: We receive the Cypher, Imagos, Keris, Lorican and Scourge dragons. Cypher dragons are travelers of the planes and do have some rather cool, unique abilities – they can disrupt patterns just like the Cryptic-class and indeed, their age-category abilities gained fall in line with this concept and remain their uniqueness.

Imago dragons do not cause fear, instead using confusion and are the wilders among dragonkind, coupling wilder-style tricks with a theme of oneiromancy etc. – cool! Now if you’re like me, at one point, the color-coding of dragons annoyed you – while templates etc. by now allow for ways past that, simply introducing the energy-type changing Kerris dragons and their tricks might do the trick as well. Two thumbs up! Speaking of which – the Lorican dragon’s tricks are imaginative as well – these guys can wrap essentially a pocket astral plane around themselves and exert control over this area, modifying magic affinity, gravity etc. – innovative and just incredibly cool!

Finally, the Scourge Dragons would be the dread-equivalent to the cypher dragon’s cryptic-affinity -masters of fear with an affinity for the plane of shadows, they should be considered rather awesome as well. But this would not be all – beyond these trueborn dragons, there also are Ksarite dragons and drakes, partially composed of psionic force -compared to the true born dragons, though, these guys feel less impressive.

In case you’re looking for templates to apply to creatures, we also receive fodder in that regard beyond aforementioned brain worm hosts – take the Marked One (CR +3) template – studded with psionic tattoos they can spread, these guys are obsessed with order and there might very well be a global agenda behind the phenomenon… narrative gold hiding here. Speaking of which – by now, you can create your own deranged trepanner-constructs -cool to see the missing crafting information showing up herein. I just wished the psychotrope drugs of a shambler variant had received similar treatment.

A massive appendix of creatures by type, by CR and by terrain makes this bestiary easy to handle for the DM – kudos!

Editing and formatting are top-notch: At this point a shout-out to Anguish on the Paizo boards who did a massive bunch of editing for this book, checking statblocks for even the most minute of errors. My hat’s off to you, sir (or madam)! The pdf comes fully bookmarked for your convenience and layout adheres to Dreamscarred Press’ two-column full color standard. The artworks provided for the creatures herein are universally full-color and belong to the more gorgeous, unique of artworks you’ll see. While not adhering to a uniform style, the artworks are great and the less than awesome ones from the WiP have been exchanged with higher quality pieces – neat! It should also be noted that the pdf of this book comes with an additional, more printer-friendly version – nice! I can’t comment on the print-version since I do not have it.

The team of designers Jeremy Smith, Andreas Rönnqvist, Michael McCarthy, Dale McCoy Jr., Michael Pixton, Jim Hunnicutt, Jade Ripley and Dean Siemsen have done a great job – the psionic bestiary offers quite an array of damn cool psionic creatures, studded with unique signature abilities, using the rules to their full extent, often significantly improving the less than superb examples among the WiP-files. Indeed, the majority of the creatures herein have something significantly cool going for them. Now if there is something to said against the pdf, it would be that there is no template to turn non-psionic creatures into psionic creatures and wilder in the class rules of the respective psionic classes. This is especially baffling to me due to the cover offering an aboleth, of which there is a distinct lack of in the book – why not provide some psionic versions of these iconic foes?

This would constitute the only thing truly missing from this book – a way to codify psionics in a massive choose-your-tricks template – other than that oversight, this book is a glorious bestiary, especially if you’re looking for far-out creatures…and for fans of psionics, there’s no way past this, anyways. My final verdict will hence clock in at a high recommendation of 5 stars, just shy by a tiny margin of my seal of approval.

You can get this awesome bestiary of deadly foes here on OBS and here on d20pfsrd.com’s shop!