Five Nights at the Scythe

Five Nights at the Scythe 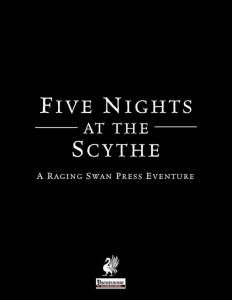 Now, it should be noted that the tavern holds a secret, which, unlike the things encountered in most eventures, may well spark conflict; the NPCs referenced throughout, including this section, note alignment, gender, species and class + suggested class levels, but do not provide actual stats, so if you want to go into the combat route, be aware that you may need to do some stat-crunching.

As a whole, there is one primary weakness to this inexpensive offering, and that would be the absence of hard rules for this supplement; while nominally dubbed Pathfinder, this has no DCs, not even for gathering information, provided; if you wish to run the combat-angle, the suggestions for the NPCs etc. would make this work only for the lowest levels, which does sell the otherwise awesome stage short. It is particularly weird to see a reference to a Barroom Brawl without mechanics, when Raging Swan Press has published a very good and inexpensive supplement handling that.

Creighton Broadhurst has a well-deserved reputation for excellence in his writing, and this supplement is a great reminder for that, as far as the fluff goes. When it comes to actual rules, this supplement is even more anemic than most Raging Swan Press offerings; this genuinely straddles the border of what one can still call “Pathfinder-compatible”, with only class references truly being a reference to actual mechanics.

In many ways, this aspect does hamstring the supplement a bit; getting at least some Bluff or Sense Motive or Sleight of Hand modifiers would have been nice; heck, the secret I alluded to should have some sort of DC associated with it…but alas, nothing. Now, if you don’t mind the absence of any useful rules and are willing to do some minor crunching/adding in re the Barroom Brawl supplement, then this becomes a resounding recommendation! For the low and fair price, you’ll get some cool scenes to add in between your modules. If you do mind this and want something that’s mostly ready to run, then the complete absence of even skill values may limit this to the extent where it becomes less appealing.

Now, personally, I think this works better than “Night of the Masks”, but it also is *almost* the system neutral version and doesn’t add system-relevant aspects that should be there. As such, my final verdict can’t exceed 3.5 stars, rounded up due to in dubio pro reo and the low price point.

If you like my reviews, please consider leaving a donation via paypal, or joining my patreon. Thank you.