Animal Races: Dawn of the Cerapod

Animal Races: Dawn of the Cerapod 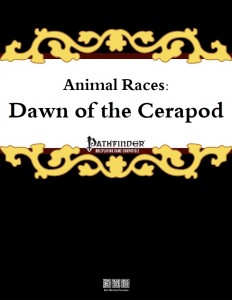 Where the carnosaurians were the rulers and warriors of the perished empire of lizards, the cerapods were the artisans and farmers, humble and domestic – but they fell alongside their empire…

This does not mean, however, that you can’t play them! The pdf provides information on various subtypes, from bird-feet to bone-heads and horn-heads and beyond, including the professions they were most likely to follow and, as always, provides full age. height and weight tables for your convenience. Similarly, the pdf provides detailed information on religion and the like.

Base-stat-wise, cerapods are medium reptilians with low-light vision and 5 ft.-scent that upgrades to 30 ft. at 6th level and they begin play with +1 natural armor that increases to +2 at 10th level. They also begin play with a 1d4 natural weapon determined by clan, 1d6 if the character gets a size-increase to large. 4 racial heritages can be chosen: Bird-feet receive a tail attack and +2 Str and Int, -2 Cha and may choose the racial heritage feat Bird-Footed as a combat style feat.

So, let’s take a look at those feats: Armor-Plated is interesting – the feat grants you basically a built-in scale armor, but also makes you slow and steady (as the dwarven racial trait). Taking the feat a second time allows you to wear an armor above your built-in scales, using the biggest AC-bonus and stacking special armor properties of both armors. Yes, you can enchant your built-in scale armor and yes, the trait sports concise rules for what happens if your built-in armor is broken.

Bird-footed is more traditional in its effects – you choose from fast movement or trample; once you have both, you may choose improved trample or primeval mind. (Bear in mind the traditional 1/ 2 levels you may take this feat, so primeval mind’s charm immunity hits 6th level at the very soonest.)

Bone-Headed works similarly: Choose fast movement or improved slam, thereafter primeval mind and clobbering charge are unlocked. The latter allows you to add a bull rush to a slam attack executed at the end of a charge, with a chance to stagger the target on a crit.

The Horn-headed may choose improved gore, powerful charge, stability or trample and, once these have been taken,primeval mind…or large and stout, which upgrades your size to Large!

As before, we receive interesting information on the genealogy of these saurians and, as has become the tradition with this series, folklore-information, which, this time around is particularly detailed – and the pdf is better for that: The saurians are tied to a wide array of monsters, which makes them feel like an organic part of a campaign world from the get-go. The deity provided here is unique: Kouros was *LITERALLY* the soul of the empire, a kind of collective consciousness or imperial zeitgeist, if you will. I can, obviously, relate. 😉 The pdf also provides interesting hooks and angles for saurians surviving the fall of the empire – whether planar exile, newly developed cerapods or resurrected creatures – the angles are interesting. Like the companion book, though, we do not gain the usual cool heraldry-based traits.

Editing and formatting are top-notch, I noticed no glitches. Layout adheres to the series’ elegant, printer-friendly two-column b/w-standard with thematically-fitting full-color and b/w-art. The pdf comes fully bookmarked for you convenience.

Eric Morton’s cerapods are distinct, versatile and generally well-balanced – the stacking of armors is interesting and powerful, but the feat-tax does offset the power…and the armor still requires the gold…so yeah. Flavor-wise, this is intelligent, smart and fun – there is frankly nothing to complain about apart from the lack of the cool heraldry-traits, but I won’t hold that against this pdf. This pdf has nice, fun options and offers an excellent bang-for-buck ratio, exceeding the carnosaurus-pdf in versatility. Hence, my final verdict will clock in at 5 stars + seal of approval.

You can get this inexpensive saurian race-toolkit here on OBS!