ZEITGEIST #1: Island at the Axis of the World 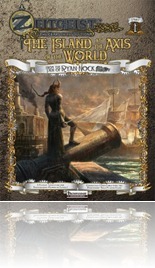 This adventure-module from EN Publishingfor the Zeitgeist-AP is 59 pages long, 1 page front cover, 1 page editorial, 1 page ToC, 1 page SRD and 1 page back cover, leaving us with 54 pages of content, so let’s check this out!

All right, still here? Then onwards! Because of the espionage/conspiracy-theme of the AP, a roster of NPC-handouts is provided for the DM to keep track of the movers and shakers, but more on that later – The PCs, agents of the RHC (Royal Homeland Constabulary), have prepared for weeks for an interesting event – the Coaltongue, Risur’s first steam-powered ship is off to its maiden voyage and the king will attend – thus, their first task will be to check upon the crowd (potentially helped by a portentous dream) for potential troublemakers. Creating threat profiles, recruiting cops to fleece the crowd and dealing with the troublemakers makes for a rather cool and unconventional first encounter, based massively on skills and roleplaying – awesome! Even better, the AP addresses a pet-peeve of mine – since the PCs are good guys working for law and order, their training involves not killing their adversaries, making subdual damage a central mechanic and the PCs able to deal it. While a brawl is possible, a non-violent solution is preferable. And better yet – a duality between dockworkers and policemen is already introduced, delivering the first array of consequences for their actions.

And the PCs do get a prompt reward – after being introduced to Principal Minister Harkover Lee, bodyguard to the king, they are bidden abroad the coaltongue to first socialize and keep an eye on potential threats (and there are a lot of interesting characters and even philosophical debates going on) before the king gets on board. After socializing and meeting with some rather cool characters and movers-and-shakers of the nation, the PCs will be warned that a certain individual has not yet shown up – and the chase in on, for the person is gone and a certain handmaiden is up to no good, trying to sabotage the boiler of the ship! Worse, with the firedust and the rather complex mechanism, a simple disable device-check will not be enough – instead, creative thinking, fast actions etc. will be required to contain what could turn out to be a catastrophic chain reaction of explosions that slays the king and everyone on board. Hopefully, the PCs are up to the task!

Unfortunately, though, the mastermind behind the assassination is by this time already gone with the winds and until the minister of outsiders, Lya Jierre challenges the PCs with a puzzle one week later, they have to bide their time and wait for civil war. Thankfully, the minister is here to bend the rules – to prevent a war, she orders the PCs to accompany the RNS Impossible to an attack on the Axis Island, where the duchess responsible for the sabotage is hiding. The army’s infiltrators will go first and if anything goes awry, it’s the PCs turn. The operation has to be done in less than 3 days to ensure no political ramifications and Lya also wants the PCs to rescue a relative of hers. Guess what? Bingo, they botch the job. Well, at least the PCs get supplied with mission critical equipment by the RHC. Entering the island via a sea-cave and finding some perplexing relics, the PCs make their way past half-mad survivors to the fortress of Axis Island – and its sea-gate, which the PCs should open if they want to have any chance to retake the island. After an infiltration of the lighthouse (and the potential to botch royally), the stakes are up, though, and the PCs will be sorely challenged by a hold-the-line type scenario, where the PCs have to keep enemy forces from entering the lighthouse and can use a staggering variety of skills and methods to keep the enemy forces at bay.

After this section of the invasion, PCs will witness the legendary elf-warrior Arabey emerge as a stowaway from one of their ships, cutting a swathe through both their men and the duchess’ guards – and after a prison interrogation, the PCs have a chance to follow the legendary warrior into a strange phenomenon of reality-ripping into a fey-inhabited, slightly burning hedge-maze before they can enter the central tower – where they can hear the duchess, Arabey and Nathan Jierre discussing the weird political situation and the enigmas brewing – and have a chance to take the legendary elven one-man dreadnought down: Though he is level 15, he is down to 1 Hp and a lucky PC may actually take him down and capture him. Anyways, the PCs have hopefully averted open war between the nations of Danor and Risur and realized that the elven Unseen Court also has stakes in this grand game, which will be continued in #2.

The pdf also provides a quick reference-list of NPCs, 1 page of dramatis personae (including mug-shots),2 handouts for the assault the lighthouse-section of the module, a full-page map of Flint and 8 pages of player-friendly maps, with only two of them sporting keys and numbers that may give away locations – since, however, both are of overland locations and don’t contain spoilers, I won’t rate this down.

Editing and formatting are top-notch, I didn’t notice any glitches. Layout adheres to a beautiful full-color standard and as per the free guides, the pieces of artwork featured herein are mostly stunning and mind-boggling. The cartography is just as impressive and also in full-color and the amount of maps provided is stellar indeed.  The pdf, gorgeous to look upon as it is, will, just like the guides put a brutal drain on your ink reserves – unless you make use of the layers of the pdf, which let you customize the adventure to set how much you’re willing to spend ink-wise. The pdf comes fully and extensively bookmarked.

Wow. Honestly, I knew that the crew of ENpublishing is good – I do own the War of the Burning Sky. This one mops the floor with just about every installment of aforementioned AP – the encounters are diverse, challenging, focused on intelligent roleplaying, provide action galore and add a sense of identity and “being different” to the AP that is a joy to behold. Zeitgeist is different from other APs and it is proudly, boldly even so judging from this module. Better yet – this first module is free to get you hooked and it does a stellar job of doing so. This is by far the best free module I’ve read for PFRPG – with top-notch production values and enough ideas to fill multiple modules. While the lack of a printer-friendly version is a pity, the layers do their job and this module still remains a truly excellent adventure and thus my final verdict will be 5 stars + endzeitgeist seal of approval.

ZEITGEIST #1: Island at the Axis of the World is available from: