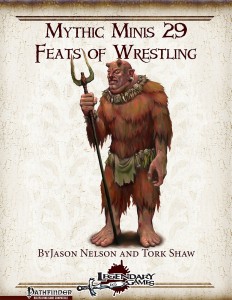 -Body Shield: Increased cover bonus by mythic tier and use mythic power to use body shield with multiple attacks per round.

-Bonebreaker: Add crippling citical-effect to the feat and cause fatigue versus non-mythic adversaries.

-Chokehold: Has a nasty typo – it should eliminate the penalty for use against larger opponents, not eliminate a non-existing penalty versus smaller opponents. Also add lethal damage to pinned foes.

-Felling Escape: Add mythic tier to escape attempt, plus reroll if you use mythic power. Additionally, add trip attempt as either free or swift action, latter with mythic rank or tier to bonus.

-Gang Up: Extend expertise bonus to allies threatening the same target and help 1/2 mythic tier allies with one aid another. Additionally, receive a bonus to CMB if multiple allies threaten an enemy.

-Jawbreaker: Treat damaged mouth as having the broken condition, can use ki and mythic power instead of stunning fist. Pretty awesome!

-Under and Over: Use the feat reflexively if an opponent fails to grapple an ally while being threatened. Additionally, add entangled condition temporarily to target subjected to feat. neat!

This one caught me by surprise – I expected this to be boring and it wasn’t – the effects provided by Jason Nelson and Tork Shaw are diverse, the -breaker-feats are cool and the tactical options this provides are neat. That being said, the Chokehold-glitch is pretty nasty and weighs heavily in a pdf of this brevity. hence, my final verdict will clock in at 4.5 stars, rounded down to 4 for the purpose of this platform.

You can get this neat collection of mythic feats here on OBS and here on d20pfsrd.com’s shop.
Endzeitgeist out.