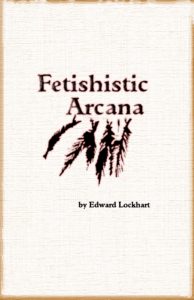 This little pdf clocks in at 25 pages, 1 page front cover, 1 page blank, 3 pages of SRD, 1 page back cover, leaving us with 19 pages of content, though it should be noted that they’re formatted for A5 (6” by 9”)-sized booklets; you can fit 4 of them on one sheet of paper, if you choose to print them out, so let’s take a look, shall we?

So, on the first page, we actually get a public domain extract from a German ethnographic collection, including a bit of text, which was somewhat hilarious and fitting to me, contextualizing the concept presented within these pages. So, what are fetishes in the context of this pdf? They are items that must be worn or held and their construction requires the arts and a ritual, but not necessarily any staggering costs and any of these fetishes may be used by any spellcaster. A total of 12 such fetishes are included in the pdf, with 4 qualifying as ancient fetishes – more on those later.

Well, for once, they represent items that low-level magic-users can have. That make them somewhat less of a liability. *GASP* I know, I know, heresy and all such, but let me state something here for a second: I’m all for weak casters at low levels. It explains why the land’s not flooded with arch wizards and makes getting to the levels where you can pulverize whole legions an accomplishment to be proud of. It’s the reason I prefer even my rules-heavy systems to have an imbalance in the progression of characters as opposed to e.g. 4th edition’s fighters and casters feeling so similar. It’s a matter of taste.

Now in OSR games, I do like that playing a low-level magic-user is a PAIN; depending n the system you use, a housecat can arguably kill you RAW. However, as much as like old-school gaming, I can’t deny that I do have serious experience with more rules-intense versions of the game…and with these, obviously also came a certain feeling of entitlement. Not regarding power, mind you – I always prefer my games on the gritty side. But regarding OPTIONS. You know. Player agenda. Not being restricted to the 5-minute adventuring day. Being able to modify magic to make it feel…well. Magical. Strange. Alien. It’s a reason for me liking LotFP’s occult feeling, unstable and dangerous take on magic that may royally screw over the careless – it’s risky…but it has a bit more options, a bit more agenda.

The items herein follow a similar design paradigm. They come with hefty, yet affordable silver prices. They also feature construction rituals. Let me give you a taste: When a human warrior is slain on the battlefield via treachery and when the human has taken at least one goblin life, that’s when teh sacred sightless, goblins that have blinded themselves, goblins that have never seen the hated sun, can smell the corpse. The body will be desecrated and defiled, its components strewn through the wilds, its jawbone kept intact and chewed free of most flesh. The bone will then be hanged from a widow’s walking stick and dried there; finally, 6 raven feathers are attached to the jawbone, the loosened teeth rattling as it is shaken. All damaging spells thereafter cast through the item inflict +1 damage versus human and also inflict the spell’s damage inevitably again on the following round – though the wording here could be more precise: One could read this echo to pertain only to the bonus damage, when the whole spell is meant. Oh, and non-goblin users risk a chance of becoming goblins when using the fetish.

This example should illustrate pretty well the strengths, but also the weaknesses of the pdf. The construction requirements for the fetishes generally are well-presented and evocative, as is their activation. At the same time, the rules-language honestly leaves something o be desired. And no, OSR does not equal tolerance for sloppy rules; one look at S&W, LL or LotFP shows pretty clearly that these rule-books actually are VERY precise beasts.

There are more precise items, like mirrors of obfuscation that can be rather interesting, which allow you to stealthily cast spells, but at a small risk of forgetting that you have cast the spell AND the spell from the spellbook, which can actually result in an interesting plot. There is also a defensive fetish that increases the duration of defensive spells greatly – which is cool…but brings me to a nitpick. While some spells are noted, the fetish fails to present a precise list. This may be a mostly cosmetic thing in actual use, but can still yield some issues, which is why many OSR titles assume a default system – here, that would be LotFP – but when one assumes a default system, why not present a concise list?

That being said, the items themselves do feature some seriously cool options – like an artificial jaw into which you insert a dead man’s teeth and thus can talk to the perished, even without requiring a functional body…but there is a chance that the spirit will be stuck in the fetish. Another fetish enhances arachnid-related spells, but makes you foe and preferred target of arachnid creatures encountered. What about a rose that greatly increased the potency of your charming spells, but has a serious risk of falling in love with the spell’s target? Lenses that make you perceive the whole truth, fused to your body. There also would be ram’s horns that generate bursts of deadly energy, providing a taste of later level’s potency, though the direct damage, if you presume LotFP’s standard design paradigm, are pretty valuable – the particular item imho fits LL or S&W more.

Editing and formatting are pretty good on both a formal and rules-language level – while both can be improved, the pdf generally is solid. Layout adheres to a 1-column full-color standard in A5 (6” by 9”) with fitting stock art. The pdf has no bookmarks, which constitutes a comfort detriment.

Edward Lockhart’s collection of fetishistic arcana is a somewhat mixed bag. The pdf’s items are interesting and often can jumpstart an adventure or two by means of the complications they offer. The detailed construction notes similarly are nice and flavorful. So, on the plus-side, we get some seriously cool options for magic-users, in particularly to make low-level existence less of a hassle and more rewarding; not less deadly, mind you – but more versatile, which is good as far as I’m concerned. At the same time, the rules-language components could be more precise than they are. How to rate this, then? Well, to me, this file is a mixed bag, slightly on the positive side – which is why I’ll settle on a final verdict of 3.5 stars, rounded up due to the PWYW-nature of the pdf. Well worth contemplating for your OSR games and idea-scavenging…and leaving a tip for.

You can get this nice little pdf for any price you want here on OBS!
Endzeitgeist out.