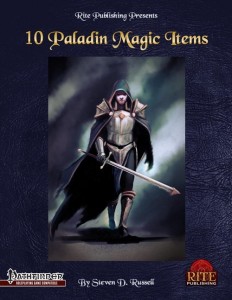 This pdf clocks in at 9 pages, 1 page front cover, 1 page editorial, 1 page SRD and 1 page advertisement, leaving us with 5 pages of content, so let’s take a look!

We kick off this pdf with 2 new enchantments – harm’s way allowing you to intercept attacks on adjacent allies a limited amount of times per day, whereas the Patience enchantment is *very* interesting – it confers +2 to atk and +2d6 nonlethal damage if you or your allies do not execute the first attack in a combat encounter, thus rewarding *not* setting up a first strike ambush scenario. Cool way to reward paladins for behaving virtuously. That being said, on a slightly nitpicky side, the wording does refer to “the paladin” instead of “the wielder”, insinuating that the enchantments are paladin-exclusive when they aren’t. This does not impede their functionality, but it does constitute a minor glitch. This partially extends to the items.

In the tradition of the 10-series, we actually receive much, much more than the promised 10 items – with the exception of the new artifact and 2 items, all of the items herein come in three versions – a lesser, a standard and a greater version. Though, on an admittedly nitpicky side, some items instead differentiate between lesser, greater and superior versions for a slightly confused terminology. As far as I could tell, GP-costs are not a factor between deciding which terminology to use, rendering thus the chosen words just non-unified. Once again, this is a cosmetic glitch, but one that potentially could cause unnecessary confusion.

Enough nitpicking, onwards to the items: Boots of the Brave allow you to excel when kicking down the door and protecting your allies when covering their retreat (temporarily enhancing their flight-speed!), including an option that allows you to make combat maneuvers to shut down enemy movement. Pretty cool item, though the latter option to negate movement of target creatures may be a bit strong for the 18,500 GP price-tag of the superior boots. Bracers of Heroic Deeds allow you to catch allies about to fall – which is iconic. Switching positions with an injured or helpless ally should probably specify that the effect is a conjuration (teleportation)-effect and magically taking an effect or attack – all of these have a limited number of uses per day to balance them. Once again, extremely useful and damn cool.

Gauntlets of Remand hearken back to the exceedingly cool “Manalces of Idonis” from Rituals of Choice I, granting the character an extradimensional prison, with efficiency increasing over the levels – exceedingly cool and awesome to take foes alive, this also allows for pretty cool infiltration strategies. The heavenly helm (here, there’s only one) allows you to use lay on hands as a gaze attack a limited amount of times per day. While it’s called “layout on hands” once, that once again is a typo I can live with – it does not impede functionality.

The Ring of Honor’s Justice is also interesting -it penalizes foes that use poison or similarly cowardly tactics with scaling curses. Nice! The Tabard of Righteous Metamagic increases effective spell levels for spells with the [lawful] or[good] descriptor. On another nitpicky tangent, formatting of the presentation of the 3 variants deviates from the one established in the other item entries.

Vestments of Honor’s Virtue defines honorable attacks and allows a paladin to receive a powerful defense buff a limited number of times per day.

The final item herein would be the artifact Harngaul, “The Righteous Storm” is created from alchemical ceramic, a new material, and is a double-edged greatsword and also a legacy item – this would be Rite Publishing’s take on magic items that increase in power over the levels. a hint of the significant power is granted via an omen the chosen wielder experiences. The blade increases in power at 3rd, 6th, 8th, 10th, 12th and 15th level, with unconscious-rendering effects to grant foes mercy to increased smiting capacity, channeling spell-like or supernatural abilities via the blade to dimensionally anchoring foes and even making force-weapons to accompany your strikes and finally adding holy avenger-style abilities.

Editing and formatting of this pdf are its weak point – the pdf has a number of cosmetic glitches that render some rules slightly opaque and some typos are in here. Layout adheres to Rite Publishing’s 2-column full-color standard. The pdf comes with nice full-color artworks I haven’t seen before and is fully bookmarked for your convenience, in spite of its short size.

I sometimes wish RiP-mastermind and author Steven D. Russell had more time on his hands for writing – Steven ahs a massive flair for creating iconic, cool things that just rock and this pdf is no different. Where other pdfs would have bored me with celestial pseudo-apotheosis number 3849 or bland numerical escalation 489, the items herein dare to be *unique.* There is not a single, lame item herein – this pdf is literally all killer, no filler in the content-department, offering powerful, cool tools for good PCs as well as great fluff in between the crunch. Were it only for the content, I’d immediately rate this 5 stars + seal of approval. However, the pdf does sport more glitches than usual for Rite Publishing and some of them could conceivably cause confusion on whether the item in question is paladin-exclusive or not. As much as I want to, I hence can’t rate this the full 5 stars, instead settling on a final verdict of 4.5 stars, rounded down to 4. HOWEVER, personally, I love the items herein – they are often just godsend on the utility level and hence we have one of the rare pdfs here that receives my seal of approval in spite of not getting the full 5 stars – to denote how cool these items are, in spite of the formal glitches.

You can get these awesome items here on OBS and here on d20pfsrd.com’s shop!
Endzeitgeist out.