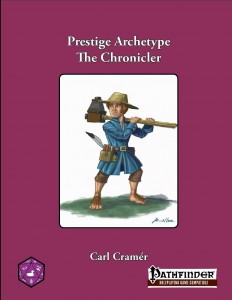 This installment of the Prestige Archetype-series clocks in at 13 pages, 1 page front cover, 1 page SRD, ~1/2 a page of editorial, leaving us with 11 1/2 pages of content, so let’s take a look!

This prestige archetype receives 3/4 BAB-progression, d8 HD, good ref- and will-saves, 8+Int skills per level, proficiency with traditional rogue weapons and light armors as well as shields (the latter two sans arcane3 spell failure), spontaneous spellcasting via cha from the bard-spell-list of up to 4th level (though the pdf has a very confusing typo, referring up to level 5!). The class also receives a variant of bardic performance of 4+ cha-mod rounds per day, +2 rounds per class level. At second level, a doom--like debuff is added with Grim Tales – yeah, the class abilities of the chonicler have been properly streamlined into one ability-group – kudos!

Alas, the crazy prepared ability Deep Pockets has not been fixed – RAW, the chronicler can still draw forth fitting keys for locks – a caveat to further prohibit the acquisition of items the chronicler cannot reasonably have foreseen when packing/shopping for unspecified items should be added here. Greater Epic Tales has been moved to the now appropriate 13th level and the overall dispersal of bardic/chronicler abilities is solid indeed.

As always, we also receive FCOs for the core races as well as sample characters for 1st, 5th, 10th and 15th level.

Conclusion:
Editing and formatting are still good, though less tight than in most of the series, with slightly misleading glitches here and there. Layout adheres to Purple Duck Games printer-friendly two-column standard and the pdf comes fully bookmarked for your convenience.

Carl Cramér’s take on the pathfinder chronicler is a more than solid revision of the original PrC – rewiring the abilities into the bardic-style performance is something overdue and the streamlining of the class works pretty well. That being said, this pdf is also not perfect – with the streamlining, interaction with feats and abilities that modify bardic performance, availability of bardic masterpieces etc. – there are quite a few rules-synergies that need to be addressed. Now I consider this installment one of the better in the series, mainly due to the pdf providing more proper advancement/revisions of the basic PrC, but at the same time, there are quite a bunch of different options that should be addressed for this rough diamond to truly shine -as written, this is a slightly more worldly/skill-focused bard than the regular bard, a solid take indeed, though not a perfect one. My final verdict hence will clock in at 3.5 stars, rounded up by a margin to 4.

You can get this installment of prestige archetypes here on OBS and here on d20pfsrd.com’s shop.