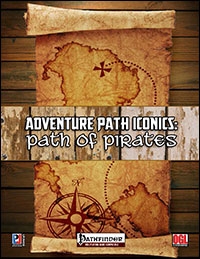 The latest installment of LPJr Design’s Adventure Path Iconics-series is 27 pages long, 1 page front cover, 1 page SRD, leaving us with 25 pages of content depicting ready-to-go pregens for teh Skull & Shackle adventure path, so let’s take a look, shall we?

As has become the tradition with this series of pdfs, we kick off the supplement with an introduction that explains abbreviations and the like as well as introducing us to the basics – this pdf contains 4 human pregens and 4 ones using the unconventional races of LPJr Design’s NeoExodus-setting. Said races have by now been added to d20pfsrd.com, in case you’re wondering what they’re all about. While all characters are build with 20-point buy, the supplement contains individual scaling information to upgrade the characters to 25 or downgrade them to 15 as well as information for progressing the characters over the next couple of levels.

That out of the way, the very first character, Bale Tehya, would be a Prymidian (red-skinned polyglot humanoids with the potential to have tentacles) bard (sea singer) – son of a famed pirate queen, his revenge and vendetta against the chelish armada almost complete, he found himself in quite a predicament (alongside the other PCs)… however, this would not be the first time Bale has slipped his shackles. Rules-wise, he is a charismatic, agile bard with a solid utility selection of spells.

Second among the new Pregens would be Bilgeghost, a Sasori (Scorpion-man) prize-fighter monk with a bakcground as a brawler in fighting pits – from boogeyman/aspiring information-broker to captive, Bilgeghost makes for an alien, cool character.

The Dalrean Sorceror Flowing kelp makes for one intriguing addition as well – not understanding the concept of private ownership, the Dalrean bumbled through human society until also being pressganged. The writing here is rather concise and intriguing, but at least to me, there are some minor hick-ups that could have been explained – how do Dalreans drink? Being plants, they can, but lacking a mouth, can they get drunk? Do they draw sustenance from alcohol? Also: The Dalrean is mentioned as feeling like heaving upon waking – can Dalreans heave? It’s nitpicking, yes, but since the rest of the prose uses appropriate words, using “withered” as an equivalent for “hangover”, it’s something I noticed. Also, it would have been nice to have the blooline mentioned in the statblock instead of having to extract it from the text/crunch.

The Peg-legged Enuka-barbarian Shark Stalker would be the fourth member of an uncommon race and gets fitting mutations – with gills and webbed feet, he is superbly adapted to water-based adventuring…though personally, while I can see a peg-leg working perfectly on land (even with 40 ft. movement), at least for me, a peg-leg and webbed feet delivering a swim speed don’t mix – I’d probably cut the swim speed from webbed feet in half due to the peg-leg. His background also is neat.

The first human character would be the red-haired gunslinger-lady Trista Rask. Born as the daughter of wealthy adventurers, her spoiled upbringing surrounded by sycophants and harsh demeanor has left has friendless and when her brother failed to return from an excursion, she set out on her own – only to be captured.

Sabine Finn, a shark shaman druid, abandoned by her primitive superstitious folk due to an auspicious shark-like birthmark makes for a surprisingly positive, nice character with a glorious artwork – kudos!

Ral Fayden, a freebooter ranger seeks to step out the shadow of his wayward father, making a name for himself – a solid build and probably the most common build you’d expect – very piratey, though not particularly imaginative. A bit strange: He’s very much ranged weapon-focused, competing with Trista in that spot.

The final pregen would be Salty Jake, a native of the realm of pirates: Abused and forced into a poison-based mass murder to escape captivity, he is a haunted man – and perhaps one of the most interesting characters here, one that offers ideas galore for teh DM and the player to explore moral shades of grey.

Editing and formatting are very good – editor Joshua Yearsley has done a great job here. Layout adheres to a full-color 2-column standard with a map-style border and nice parchment-style backgrounds. The pdf comes fully bookmarked and in two versions, with the second one being more printer-friendly. The mugshots provided for each of the characters are not only original, they are glorious and top-notch in quality.

Author Larry Wilhelm has crafted a selection of rather cool pregens in this supplement – whether for Savage Tide, Skulls & Shackles or Razor Coast, this supplement provides some cool ideas and nice characters. While the Enuka suffers from some minor incongruities and the sorceror statblock should have mentioned the bloodline, overall there simply is not much to complain is this neat collections of pregens – unlike the Path of Winter-pregens, I noticed no proficiency-glitches or missing traits – a solid offering, clocking in at 4.5 stars, rounded up for the purpose of this platform.

You can get these cool pregens for all manners of piratey campaigns here on OBS!