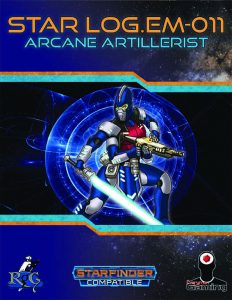 After a brief introduction, including the by now standard and enjoyable “Query”-dialogue that simulates logging onto a database, we begin this pdf with SFRPG’s take on one of the most trouble-laden concepts of the 3.X history, the arcane archer…erhhh, I mean “arcane artillerist.”

For Starfinder, the concept has been envisioned as an archetype here, with alternate class features gained at 4th, 6th, 9th and 18th level. Artillerist’s Seal lets you create a unique fusion seal chosen from the list: Called, dispelling, glamered, illuminating, merciful, seeking. Odd: “Called” and “Seeking” are not properly italicized. The seal works only for the arcane artillerist, and you may change weapon fusions after an 8-hour rest, or by resting 10 minutes and spending an additional Resolve Point. Daily use limitations can’t be cheesed and the ability notes the conditions to replace a seal. Minor complaint: The example illustrating the limitation uses a fusion that becomes available at 6th level, instead of one of the base ones; as a purely cosmetic observation “(such as blasting, gained at 6th level)” would be slightly easier to grasp than “(such as blasting).” No, I won’t penalize the pdf for that.

At 6th level, this seal is improved, adding blasting, ghost killer, hybridized, spellthrower, torrent or trailblazer to the list. Additionally, the weapon with the affixed seal gets the durable fusion for free, as if it were a 0-level fusion. Finally, you can place up to two weapon fusions into the seal, but their combined level may not exceed half your level. Minor nitpick: I assume, since fusions in the corebook don’t sport 0-level fusions, that the durable fusion is not part of the two weapon fusions that you can combine.

Now, the eagle-eyed reader may have noted that the torrent fusion is new. It is, indeed, one of 3 different new fusions. Torrent clocks in at level 2. This nets a 1/day automatic attack as a full action, with a range  of half the weapon’s range increment. Thankfully, automatic, explode, line or thrown weapons are excluded, as are weapons that don’t require an attack roll. The other two new weapon fusions clock both in at level 9, when their corresponding ability unlocks them for the archetype’s seal. The first would be phasing, which translates to a single attack ignoring nonmagical physical barriers, excluding armor, 1/day as a full action. You may choose whether to resolve it versus KAC or EAC and it ignores concealment and cover, but magical barriers (spell references not italicized) automatically stop it. Automatic, explode or line weapons can’t be enhanced with this fusion, and neither can those that don’t require attack rolls. Imbued also clocks in at 9th level, and 1/day lets a spellcaster place an area of effect spell as a full action. When a single attack is made as a full action, the spell’s area is centered where the attack strikes, ignoring e.g. restrictions that would require it to be centered on the caster. Only spells with a casting time of a standard action or less can be imbued thus, and the projectile is fired as part of the action and suffers from -4 to atk. A miss wastes spell and ammo Explode or line weapons may not carry spells, and neither may those that don’t require attack rolls.

You see, the classic shots, re-imagined as weapon fusions. Interesting. As hinted at before, 9th level further expands the list of available fusions for the seal, including the energy and alignment-based ones as well as the new ones mentioned before. For 2 Resolve points and a move action, you can change the seal’s fusions. Additionally, fusions with daily uses may be recharged for 1 Resolve Point – note: The latter ability does not state an activation action; to me, it’d have made sense to make that a move action.

Finally, 18th level delimits the seal: You can place any number of fusions in the seal, up to a maximum of your character level. The pdf closes with a nice piece of flavor text regarding these fellows in the Xa-Osoro system.

Alexander Augunas’ take on the arcane sniper is indeed one of the better ones out there. Building on fusions is a smart choice, and the fact that most potent ones will burn through Resolve like a child’s birthday through candy means that you won’t be spamming the deadly ones. Similarly, the restrictions imposed on these ones keep the cheesing potential at bay. Now, personally, I’d strongly suggest keeping the new fusions archetype exclusive, but that may be me being paranoid. This is a good take on the concept, and hence, my final verdict will clock in at 4 stars. Worth getting!