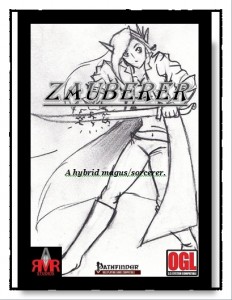 This PWYW-class-pdf clocks in at 11 pages, 1 page front cover, 1 page editorial, 3 pages of SRD, 1 page back cover, leaving us with 5 pages of content, so let’s take a look!

Zauberer (German for Wizard, btw. – and the same word in singular and plural) would be a combination between sorceror and magus. Class-chassis-wise, the Zauberer received d8 HD, 3/4 BAB-progression, good Fort- and Will-saves, 4+Int skills per level, proficiency with simple and martial weapons and light armor. Zauberer do not incur spell failure while in light armor and yes, the rules-language is precise enough and allows for no means to cheese this via multiclassing – kudos. Zauberer cast spells from the Sorceror spell-list and begin with 3 cantrips known and receives spontaneous spellcasting of up to 6th level, governed by Charisma and drawn from the Sorceror’s spell-list.

At 1st level, he gains a so-called Mag pool equal to 1/2 class level + Charisma modifier. He may expend said points as a swift action to grant a +1 enhancement bonus to the weapon wielded for 1 minute, increasing by +1 every 4 levels beyond 1st. These bonuses stack with inherent bonuses of the weapon and themselves and 5th level unlocks the usual weapon properties, which consume their equivalent of bonuses. The minimum +1 to hold the properties is maintained, preventing cheesing. Spell combat is adapted to Charisma and 2nd level provides Spellstrike and a sorceror bloodline. The Zauberer gains the bloodline arcana of the chosen bloodline and the ability takes multiple bloodline-granting classes into account. Bloodline Powers are gained two levels after the sorceror, at 3rd, 5th, 11th and 17th level, but treats his Zauberer level as his sorceror level for the purpose of their numerical and non-numerical parameters and effects. So far, so expected.

At 4th level, the class becomes more interesting: Here, the class gains the ability to deliver rays as melee touch attacks and the ability takes multiple-target ranged touch attacks and the like into account. 6th level provides the spell pool-based option to cast spells by expending mag points equal to spell level. Metamagic feats may not be added to spells powered by the mag pool. As a nitpick: The ability, while clear in its intentions, does not specify that the spell thus powered does not expend the spell slot of the associated level. At 12th level, only 1/2 mag points (minimum 1) are required to power the spells and the Zauberer may modify these spells via metamagic feats by expending additional mag points equal to the spell-level increase and sans casting time increase.

At 8th level, the class may spend + 1 mag pool point to increase the balde-enhancement duration to 1 hour and 9th level provides +2 to concentration checks when using spell combat or spellstrike, with 14th level eliminating AoOs when using either. 15th level provides spell critical: When he confirms a critical hit, he may cast a spell as an immediate action that contains the target of the crit among the AoE. This is slightly problematic – since the class gets sorc-spells and these include spells with LONG casting times, the lack of specifications regarding limitations of eligible spell casting duration mean that the class could theoretically cheese casting times. At 18th level, 7 cleric spells, one for each level, are unlocked and as a capstone, the class gets +2 to atk, damage, penetrating SR and increases spell DC by this amount when using spell combat and spellstrike.

The class sports a supplemental feat that increases mag pool-size by +2.

Editing and formatting are rather tight regarding rules-language and formal criteria – neat ob! Layout adheres to a two-column b/w-standard and is pretty printer-friendly. The sketches of the character are solid, considering the PWYW-nature of the book. The pdf has no bookmarks.

Angel Miranda’s Zauberer is a surprisingly well-crafted hybrid that plays different from what I expected – the ray-in-melee-trick is interesting (and can result in pretty nasty sudden death-boom-touch-combos) and the class plays surprisingly different from the already rather flexible magus: Instead of flexibility, the theme here is potency and the Zauberer does the job well. The spell-list-difference also results in different playing experiences, allowing the Zauberer to be more “blasty.” While there are some very minor hiccups and while this won’t win an innovation prize, it is a surprisingly solid take on the spontaneous magus concept that has more unique identity than I expected. Taking the fair Pay-what-you-want-model into account, this definitely is worth a tip. My final verdict will clock in at 4.5 stars, rounded up to 5 for the purpose of this platform.

You can get this hybrid class for any price you want here on OBS!
Endzeitgeist out.