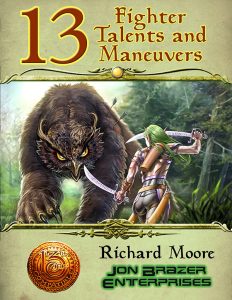 This little expansion-pdf for 13th Age fighters clocks in at 9 pages, 1 page front cover, 1 page editorial, 1 page SRD, 1 page back cover, leaving us with 5 pages of content, so let’s take a look!

The pdf begins with a brief introduction, which takes up the first page. After that, we are introduced to the 4 new talents herein, the first of which would be Bravado, which lets you once per battle, as a quick action (free for adventurer feat, +usable 2/battle, but only 1/day) roll 1d20 + Charisma vs. MD; on a success, AC and PD are lowered against your attacks by the escalation die value for the remainder of the combat. Mooks targeted extend this penalty to the whole mob. For the champion feat, this also reduces the target’s attack and damage rolls, and the epic feat adds hampered to the target once it’s staggered, with a save to briefly negate the condition.

First to Arms lets you spend a recovery to go first at the start of battle; if more than one character uses this, you go by Dexterity modifier, rolling d20 to break ties. At adventurer tier, we add the higher of Dex or Wis-mod to AC until the escalation die is equal to or greater than your level…which is pretty potent, considering the damage 13th Age characters can dish out. I’d have halved that. At champion tier, the feat also extends this bonus to PD and the epic feat lets you spend a full turn before everyone else does and still roll initiative normally after that, at the cost of a recovery. Okay can this be stacked with the base benefit?

Resist & Endure lets you 1/battle spend a recovery as a quick action to immediately reroll a save with a bonus equal to the escalation die. The adventurer feat improves that to free action, +1/day lets you sue it twice in a battle. The champion feat makes this an auto-success, sans need to roll. Not the biggest fan there. The epic tier feat makes a use of the talent free, but only the first after a quick rest/full heal-up. The final talent would be Taunt, which lets you roll 1d20 + Charisma + level vs. a nearby target’s MD. On a success, all allies gain resistance 12+ vs. the target’s attacks and power until the start of the next turn. However, the target’s crit range increases by 2 regarding attacks made against you for the same duration. Mooks taunted apply the penalties to the whole mob, and a target can only be currently taunted by one character. The adventurer feat causes the target to take your Charisma modifier in psychic damage when it attacks an ally. This damage scales to doubled and tripled at 5th and 8th level. The higher tier feats improve the resistance to 16+ and 18+, respectively. Nice: As 13th Age generally does not differentiate between types regarding the effect of psychological tricks like Taunt, the pdf does spend a bit of time explaining how to best handle the like.

Next up would be the maneuvers, two of which are first level maneuvers: Pommel bash triggers on odd misses and may daze a target for 1 turn on a failed normal save, with adventurer feat adding Strength modifier to miss damage. Champion feat modifies the effects and confuses the target for 1 turn before dazing him – no save for either condition. Compared to shield bash, particularly the latter seems a bit too strong. Cunning Feint triggers on natural odd misses and applies the higher or Int or Wis-mod to the next damage roll versus the target. The adventurer feat lets you convey that to a nearby ally instead. Both champion and epic feat sport formatting deviations from the standard – INT and WIS are not used in class feature text, instead using the full word. Effect-wise, we add the higher of the two plus escalation die/twice escalation die, respectively.

The pdf sports 3 different 3rd level maneuvers. Get Clear triggers on a natural, odd hit, allowing an ally to pop free from being engaged with the target as well as move to a nearby location. The adventurer feat adds escalation die to AC and PD for the ally vs. opportunity attacks, as well as to any disengage checks. The champion feat upgrades ally movement to a far away location, but at the cost of the ally’s next move action. Left You An Opening triggers on natural even misses while escalation die is 2+. You forego miss damage, but double the escalation bonus of an ally for their next attack versus that foe. The adventurer feat renders the target vulnerable to the next attack of the ally, while the champion feat adds an extra WEAPON die. I’m not 100% sold on the vulnerable benefit for adventurer, as most abilities that grant this are relegated to champion tier. Wounding shot triggers on a natural 16+ and you deal half normal base damage, but the target suffers ongoing damage equal to the higher of your Wisdom or Intelligence modifier, triple that at 8th level. The champion feat allows you to trigger it with a natural even hit, and ending the ongoing damage is a hard save.

There are also two 5th level maneuvers, the first of which would be Impaling Shot, which triggers on a natural odd hit. The maneuver potentially pins targets to terrain features, rendering it stuck. The target may expend a move action to attempt to free themselves with a normal save, taking ½ basic damage upon success. So, upon failure, no damage? I assume so, but this component could be a bit clearer. The maneuver has a Champion feat associated, which lets you target PD and increases the save to hard. Skullrattler triggers on a natural odd hit. The maneuver deals half damage, but hampers the foe for Strength modifier turns, with a normal save to end. Champion increases the save difficulty to hard, and the epic feat lets you inflict full damage.

Finally, the pdf has two 7th level maneuvers. Rain of Missiles is triggered on a natural even hit on escalation die 2+. You deal half damage, but also to all enemies who are engaged with the same creature as your target, with a maximum of Dexterity modifier. The epic feat extends range of the rain of missile to nearby the target. The final maneuver is Heroic Sacrifice, which triggers on a natural even hit, but requires that you’re staggered. The attack deals double damage, but you suffer half of it as well. Allies engaged with the target may pop free. The epic feat renders the target stuck unless it makes a hard save, but you also become stuck and vulnerable to the attacks and powers of the target.

Editing and formatting are very good on a formal and rules-language level. Apart from aesthetics, I saw no issues. The pdf sports surprisingly great full-color artwork, including a 1-page piece. The pdf has no real bookmarks, but needs none at this length.

Richard Moore’s fighter maneuvers and talents are interesting in that they reward fighters with decent attributes in the mental range – there is a reason to have a solid Wisdom score here, and this swashbuckl-y options are something I certainly enjoyed. The maneuvers can be considered to be a bit on the strong side of things, but offer some interesting teamwork and tactics. And there is the price-point. This pdf is really inexpensive. Considering the more than fair price point, I consider this to be worth getting – an interesting pdf that is worth 4.5 stars, and while I’d usually round down, the low price point and interesting design decisions make me round up instead.

You can get these nice fighter options here on OBS!