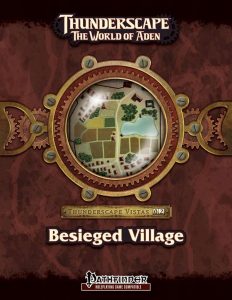 All righty, we once more begin this supplement with a brief in-character flavor-text before diving into the background, which is a bit simpler this time around: The Darkfall happened, which changed the requirements and realities of village life and what it takes to stay alive. They are fortified by necessity. If you’re familiar with the first Thunderscape Vista, you’ll notice a flip of the amount of text that is provided for general descriptions and those that depict the realities of the sample village within, which would be Syldan. This is a VERY smart move, as villages obviously are much more familiar to GMs. It should btw. be noted that yes, the generalization notes do actually provide some useful advice when introducing such a village and making sure that they make sense in Aden’s context.

As in the first installment, a big draw for the pdf would be the inclusion of a full-color map, and much to my elation, I found a player-friendly version sans annoying, immersion breaking numbers included: Minor complaint: Quarters are named on the map, and in this instance, going wholly description-less would have made the map more useful. As provided, the “Merchant’s Quarter” will now forevermore be that, as it’s written in bold letters on the map. The pond is also clearly labeled as “Syldan’s Pond”, which limits the use of the map essentially to only working as intended for the sample village within.

The pdf does something smart as it proceeds, though: Instead of providing lame, generic sample villager stats, of which most GMs will have an abundance at this point anyways, the pdf instead features a total of 6 different, named NPCs with full statblocks, including two rather awesome full-color artworks. The first of these would be Hannah Arroven, a female ferran panda ranger 7 adopted by the folks in the village at an early, she grew to become the champion of the people. On the plus-side, I never thought I’d say this, but the lean panda-lady looks extremely badass. Her artwork is genuinely amazing. Her statblock, however, is not – she lacks spells and sports a couple of minor formatting snafus. Harril Arroven would be a level 4 half-elven arbiter, and while he had a bitter childhood, he remains a steadfast fighter. Weird: His wife is noted in the header, but no stats are provided. From the context, I assume her to be a noncombatant, but I’m not sure, since the adoptive kinda-dad of Harril, Claudius, is actually fully statted as a human enchanter 9. Alas, as before, the formatting here isn’t as tight as it should be.

Speaking of formatting gone horribly awry: Typhon, once a scholar of forbidden lore now turned into a CR 9 monster, has change shape and similar abilities jammed into his SQs, notes “Pick 23” for languages and, you guessed it, spells or magic items aren’t italicized, but at least properly chosen. This massive formatting snafu really drags down what would otherwise be an impressive BBEG, for his sabertooth tiger shapechanging is as cool and twisted as his per se nice baseline…I just wished the statblock had received a bit of refinement to make it shine properly. Leona, his erstwhile wife, is btw. one of the reasons Typhon has not achieved his goal – the bard 5 is also fully stated. It should be noted that CMD values incorrectly feature a plus before their values. The final NPC would be a wildcard of sorts, with the level 6 rogue Sergei, who is keen to leave the region.

The pdf has a new trait, home guard, which does not specify its trait type, though background seems likely. This one nets you a massive, erroneously untyped +3 bonus to AC while fighting defensively. The pdf also sports a new feat, One of the Pack; this unlocks pack mentality for non-ferrans and nets you a +1 morale bonus to atk and damage when flanking.

Editing and formatting are not particularly good, particularly on a formal level. You can run this, but it’s not as smooth as it should be. The full-color artworks are original pieces and GORGEOUS, and layout adheres to a two-column full-color standard. The cartography is full color and pretty damn neat, and the presence of the player-friendly version is a big plus. The pdf has no bookmarks, but needs none at this length.

Shawn Carman’s besieged village would per se be an instant recommendation – I liked the NPCs, the map’s cool – what’s not to like? The formatting. It’s really, really bad. To the point where it seriously detracted from my enjoyment of this pdf, where it really hurt this file. My final verdict can’t exceed 3 stars.

Liking my reviews? You can support the creation of more of them by leaving a direct donation, or by supporting my patreon here!