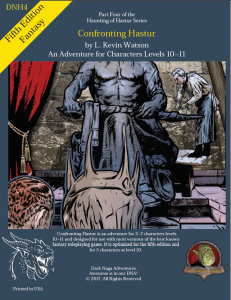 The fourth installment of the Haunting of Hastur-series clocks in at 36 pages, 1 page editorial, 1 page SRD, leaving us with 34 pages of content – this does not take the sturdy wrap-around cover into account. This cover is detachable, and the inside of this massive cover, is a GORGEOUS map of the city of Meavold, depicted in full color and in a player-friendly version – you can just hand it to your players. Big aesthetic plus!

The module, like every installment in the series, does come with an alternate introduction to the series, should you and your players be new to the series, making it easy to get into the series. This is easier this time around, courtesy of the structure of the module, but more on that later. My review is based on the Kickstarter exclusive premium print edition, which I received in exchange for a fair, unbiased review.

If you have been playing the series, you will have heard about Meavold before – it is the human city on the surface that is the primary trading partner of the City of Talos, now that the PCs have hopefully ended the self-imposed isolation of the Formene Elves.

The pdf does sport a total of 5 different statblocks, one of which belongs to a new creature, a so-called brain-drinker – you can probably glean from the angle that this fellow is basically a reskinned Illithid. This critter, with a vole’s head, is a pretty deadly adversary and its rendition is pretty solid. Annoyingly, the statblocks don’t provide the values for all attributes in the statblocks, which may require a bit of GM-mojo on your end – much like the previous installments. That being said, chances are that these minor hiccups won’t impact your game unduly. Skills are noted in allcaps, attribute checks are bolded and the like – the formatting deviates in several crucial ways from standard 5e conventions, so if that type of thing annoys you, it’s something to take into account.

Now, this module is unconventional in its structure, in that, much like the previous modules, it doesn’t really offer the traditional read-aloud text for new school modules or the like. Genre/structure-wise, this adventure is a sandboxy investigation that covers quite a few influential people. These NPCs are depicted with detailed background stories and characteristics and feel well-constructed and multi-faceted. The respective homes of these NPCs are fully mapped in detailed and high-quality maps – in the pdf, these are full color; in the print version, b/w. The maps by Justin Andrew mason are amazing and if you need a ton of mansion/upper-class mansions and stuff like that, then this may be worth getting for the maps alone.

All right, only GMs around? So, the PCs are contacted by Wyatt, a human agent of Talos – and he has unearthed troubling intelligence. The cult of Hastur, thwarted in the first adventure, has basically gone one step further: Wyatt is convinced that the cult is once more attempting to create a statue-vessel for Hastur, somewhere within Meavold. The consequences, obviously, would be dire, so it’s once more up to the PCs to thwart the machinations of the cult. Wyatt has thankfully started the investigation and limited the number of suspects : It obviously takes quite a lot of resources and clout to generate a larger statue of Hastur and keep the shrine/cult hidden – and this does limit the list of suspects in the massive city down.

Thankfully, the PCs still get a rather sizable list, and clever players will be able to already disqualify quite a lot of these beings. The encounters to do so and these easily disqualified NPCs are noted with names and occupations, but the module does not provide details regarding these. Some GM skill is required here to make these exclusions work. Alternatively, you can just handwave this away, but personally, I think that reducing this aspect of the module does take a bit away from the achievement of the module. The main meat of the module is devoted to the 5 primary suspects, all of whom feel alive in an interesting manner…and they all feel alive. The maps provided for their mansions and the like are super helpful. The fact that we get maps helps a lot to make them “qualify” as a potential villain: The players can’t just deduce the validity of the NPC being a villain by the presence or absence of detailed cartography. The details provided for the NPC-backgrounds also help regarding these fellows, and while we get ability scores noted for these NPCs, we don’t get detailed stats of sample hit points for them. As noncombatants, this is no issue, though. Associated NPCs are also noted, which further emphasizes the concept of a living, detailed cadre of NPCs.

Now, there are plenty of secrets to be unearthed regarding these NPCs – there are illicit affairs, for example, and there are folks trying to escape the bonds imposed by the prudish morals of Meavold’s upper class. One individual involved in an affair attempts to manipulate the partner to assassinate the spouse and hang for it, for example. A former smuggler gone legit has been goaded into a duel that he can’t win without help, and his thoroughly professional relationship with his unique live-in-chief can provide an interesting further angle. The fact that his manor has an observatory obviously makes him suspect. There also would be a brilliant businessperson, ages ahead of their time, who has a sham of a marriage and a long-term same-sex relationship…alas, their spouse has plans to get rid of them and end the charade, which may well result in rather disastrous consequences. A mighty dynasty of landowners has also been stretching their fingers towards the underworld, and a well-respected, reserved Royal Explorer complements this section.

The presence of the brain drinker also means that there is some rather dangerous aspect to the investigation – beyond the requirement to tread delicately when investigating the most powerful people of Meavold. Here, the adventure misses an obvious chance: The presence of the brain drinker could have allowed the GM to justify making any of these NPCs the culprit, but the adventure instead opts for a fixed culprit. While this does slightly decrease the replay value of the adventure, a GM halfway worth their salt will be able to modify this aspect thus. Still, as a reviewer, I think this could have made for a cool twist of the angle presented. Now, ultimately, the PCs will find the thankfully not-yet finished statue devoted to Hastur – and destroying it is simple enough, but in the aftermath, the Old One will have had enough – in a blast of unearthly light, the PCs will be spirited away to the final adventure’s locale – to the dread Carcosa Complex, but we’ll get to that in module #6.

Editing and formatting are good on a formal level; on a rules-language level, the adventure could have provided more regarding NPC stats and the like. Formatting also deviates in multiple ways from 5e’s standard. Layout adheres to a two-column standard and the module sports quite a bunch of original nice b/w-artworks. The cartography is particularly impressive, and the impressive amount of maps makes for a great selling point for the adventure. The print version is a nice book that embraces its old-school aesthetic in a concise manner, and the full-color map of Meavold on the insides of the detachable wrap-around cover is nice.

L. Kevin Watson’s “Confronting Hastur” is, in a way, the logical progression of his sandboxy adventures. Where #2 was limited by locale and #3 was focused on depicting a general timeline, supplemented by set-pieces, this one is, as befitting an investigation, as wide-open as possible. You can’t run this spontaneously, and novice GMs may well feel overwhelmed here. This adventure basically provides an array of plot-lines and complications, red herrings and the like, and requires that you run the module as the PCs explore the possibilities. I at once love this, and am somewhat disenchanted by it: On the one hand, the sheer amount of cartography and eccentric NPCs work exceedingly well: They make sense, are intriguing and won’t make the solution readily apparent. On the other hand, I can see some GMs annoyed by this – you get these lavishly depicted places, mansions and castles, but anything that happens here needs to be structured by the GM. This is both a crucial bug and a huge feature for the adventure – what we have here, is essentially a set-up. What you do with it is up to you.

Now, unlike adventure #3 “The City of Talos”, you’re left without set-piece tidbits to splice into the module. All such concrete components herein need to be crafted by the GM. Now, on the plus-side, the complex NPCs and their detailed agendas and exciting characters do mean that these basically write themselves, but it’s still something to bear in mind. Whether you can handle this or not, and whether you consider this an issue, depends on your own priorities. If you’re looking for a ready-to-run adventure that doesn’t require work, then this may not be for you. If, on the other hand, you want a complex investigation with amazing maps, one that sports unique NPCs, if you enjoy the idea of having a complex, fully mapped investigation scenario at your hands, then this may well deliver what you’re looking for. If you’re willing to properly flesh out the components of the adventure, that is. Now, I do consider this module to be a really worthwhile experience, but similarly, I can see this not work half as well for some groups.

As a reviewer, this puts me in a rough spot – I could see this work really well, and I can see it not live up to what some folks might expect. That being said, if you are aware of the sketch-like set-up and would like to see a great investigation set-up, then is definitely worth getting! Hence, my final verdict will clock in at 4 stars.

You can get this cool investigation here on OBS!