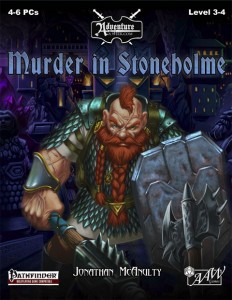 The second module set in the subterranean dwarven city of Stoneholme clocks in at 36 pages, 1 page front cover, 1 page editorial, 1 page ToC, 1 page SRD, 1 page back cover, leaving us with 32 pages of content, so let’s take a look!

All right, only GMs left? Great! The waves of supernatural darkness sweeping the city’s streets have ebbed away (either as a background info or due to the PCs playing this module’s predecessor “Dark Days in Stoneholme), but the dwarven city gets no rest – 3 dwarves have been found cruelly murdered. Now whether the PCs begin the module with a mapped encounter of a perpetrator or by being contacted again by advisor Deppenkhut depends on whether you’ve played the former module. Both set-ups are solid. In both cases, though, the PCs get some nice tools for the task at hand, a promise of pay and are sent off towards the scenes of the crimes.

In the cellar of the bakery Golden Scone (fully mapped), the PCs can investigate the murder of Hylda Guldbrot; in a small “stonegarden” shared by two families, the PCs can take a look at the remnants of poor Tavis Stonekauter and, in an alleyway, that of Eklya Hearthfall – it is this murder that the PCs have perhaps interrupted in the alternate beginning. During the assembling of these clues, strange things happen, as clouds of shadow appear and e.g. pit the PCs against a shadow drake (with class levels!). They may also meet a bard and relation to Deppenkhut, receive a business-proposal and thus be notified that Deppenkhut’s PR-machinery already extols the virtues of the PCs and their involvement – so much for incognito! And indeed, this hasty move may see demonic assassins targeting the PCs! During a progress-meeting in the city’s finest restaurant, the PCs will also have a chance to thwart an attack on Deppenkhut, which may cast some doubt on their benefactor’s true intents, as his power strikes an assailing foe immediately dead.

Further assassination attempts via caustic spider swarms leave not much time to think, though, and soon, with all the clues collected, the PCs are properly deputized to use secret tunnels to enter the manor of the Flintblade dwarves and catch them in the act, so to speak. Unholy skeletons. Abyssal larvae. Abyssal, shade-touched shadows with class levels. Yes, the tunnels are no cake-walk, but they pale before the fully mapped, quadratic Flintblade manor: Most Flintblades clock in at 4 levels, but that’s certainly not the pinnacle here: A small living wall; a powerful thaumaturge, a demon-possessed dwarf (the killer) and a lethal alchemist make for powerful foes – the PCs better used the cramped environments to their advantage, for the manor can be very dangerous – and with the copious demon-worshipping evidence gathered from the manor, the clan can be shut down, thus ending the threats to Stoneholme…right? Right?? (The answer is “No”, but that’s a story for another module…)

Editing and formatting are top-notch, I noticed no glitches or grounds for complaints. The pdf adheres to a beautiful two-column full-color standard and sports several neat pieces of full-color artwork. The book’s cartography is, as almost always in AAW Games-modules, great – though I wished the dwarven manor and tunnels had a player-friendly version sans keys. The pdf comes fully bookmarked for your convenience.

After the somewhat weaker previous installment, this second trip to Stoneholme by the pen of Jonathan McAnulty is once again a return to the author’s usually pretty impeccable form: From the tunnels to the locales, a lot of underworld/dwarven flavor can be found herein and while you could arguably still run this on the surface world, it would lose a bit of its unique flair. The read-aloud text this time around is clearly and easily distinguishable from the rest of the text, making this one easier to run.

The important thing here, though, is that the module is simply more interesting and capitalizes well on the developments kicked off in the first module, which I strongly advise you to play before this one. Why? While working as a stand-alone, this has an added edge of gravitas and impact when combined with the previous module. The investigation provided is solid and, while not breath-taking in itself, sufficiently detailed for a short module to be fun. The optional encounters provided allow the GM to enliven the fact-gathering with unobtrusive metaplot developments and maintain the desired pace, so modularity-wise, this is neat indeed.

The true shine of this book, though, comes from the challenges posed: Much like its predecessor, this is not a module for the faint of heart – while not unfair or a meat-grinder, the adversaries and their templated, class’d builds mean that you will have quite a fight on your hands. Particularly in the final parts of the module, players should be well aware of the fact that they should act smart – here, dwarven architecture proved to be the star in my game: The cramped, uncommon set-up required some nice tactics from the PCs to prevail. Advanced players will definitely appreciate the challenge and even pros will find some interesting set-ups here. How to rate this, then? While I liked the increased emphasis on underworld-ish components, I couldn’t help but feel that player-friendly maps and a slightly expanded investigation (as in: more diverse skill uses than just Diplomacy and Perception…) would have made this even better.

As provided, it is just short of a very good module, clocking in at 4.5 stars, rounded down by a margin to 4. All in all, I’m excited to see the next module and, more importantly, whether it increases in flair and panache like this did over the first one!

You can get this challenging, cool underworld-module here on OBS!