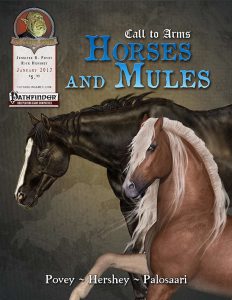 This installment of the Call to Arms-series clocks in at a massive 86 pages, 1 page front cover, 1 page editorial, 1 page ToC, 1 page SRD, 1 page advertisement, leaving us with a massive 81 pages of content, so let’s take a look!

We begin with a brief flavor introduction, before we dive into the subject matter at hand, which, this time around, would be the hooved companions – we do get a discussion of the members of the equidae, discussing biology, psychology and the like. Pretty col: The pdf actually explains the way these beings communicate – what noises etc. mean. This is rather cool and also covers different colors and we do also cover mules…and when you’d want a mule or donkey. And yes, this does include zebroids and zebras. Different types of movement, from gallop to trot etc. is covered and a handy table lists movement by rounds

The pdf also covers diverse horse breeds, but misses a chance here to present minor variations of the stats like those featured in Raging Swan Press’ “So what’s the horse like, anyways?” – instead, we get full statblocks for destriers, dorian chargers, dorian mammoths, small donkey, eohippus, garrons, mules, ponies, different types of race horses, vanners and zebras. As a minor complaint no companion-stats are given for the respective horses, which, to me, constitutes a somewhat puzzling oversight, considering that the smallest horses feature notes on the benefits they’d convey as familiars.

The pdf also covers notes on the general intelligence of horses alongside a 10-entry strong table to randomly generate the personality of the horse in question. Of course, horses are living creatures and as such, caring and feeding and various afflictions a horse may suffer from are covered – though I do not get why the latter don’t actually sport rules for the afflictions. If a horse gets rain rot, what are the rules-relevant consequences?

On the plus-side, the collection of skill uses, concisely presented, makes that aspect of the pdf pretty helpful and well-crafted and, following the tradition of the series, we collect relevant feats in one concise place: From Cavalry Formation to Involuntary Dismount. Wait, what? Yep, there also are new feats herein…but the quality of the rules material is inconsistent: “You can make a Ride check at difficulty 20 to avoid becoming Prone after a fall:”[sic!] – you can find the deviations from standard rules-language without me pointing them out, right?

Beyond these collected feats for riders, we also introduce and collect a variety of feats for the mounts in question. These make include allowing the ride to get a bonus on Handle Animal checks. Formatting here is not perfect, however – we have skills that are not capitalized, for example and there are cosmetic formal hiccups, like a “Special”-line not being bolded as well. Missing “spells” from “spells and effects” could be intentional as a deviation, but yeah.

Those options out of the way, we move towards the paladin’s mount, which come with a sample celestial and similarly, the druid’s animal companion can be found – it basically elaborates the basics and collects the relevant information. More interesting would be the animal companion archetypes herein: Charger and racer make for cool and very much required additions to the game; if anything, this pdf should have had more of these, which were pioneered in the animal archive! Sooo…why aren’t there new ones? Speaking of cool: It’s nice to see leadership and the subject of mount cohorts tackled in this book as well.

The pdf also features the hussar class, which receives d10 HD, 4 + Int skills per level, proficiency with light blades, lances and simple weapons as well as with light armor and shields, excluding tower shields. Chassis-wise, the class gets good BAB-progression and Ref-save progression and begins play with Mounted Combat, a mount (which may have racer or charger archetypes) and a so-called “line”. These would be order-like abilities that expand the proficiencies of the class, net a bonus feat and grant one ability at 2nd, 8th and 15th level. These include better shooting while in the saddle in two of the 4 lines…and the lines are decent, if not perfect – there is, for example, a reference to a saving throw for a target, but no note on the DC…Nomenclature is also weird: “Mounted Flurry”, for example, does nothing that you’d associate with flurries, instead granting a static +2 to atk and damage and an AC-bonus. Not impressed there.

Where I really get flustered is with the skirmish ability: Bonus damage whenever you charge +1d6, plus an additional 1d6 every three levels thereafter. Because we ALL know that the one thing mounted combat needed was MORE DAMAGE. WTF?? Worse, starting at 3rd level, mounted charges no longer provoke AoOs…which makes this class fail my basic balance criteria. While the bonus damage is not multiplied on a critical hit, neither is it precision damage. It’s a charger-class that deals EVEN MORE damage than Pala, Cavalier, etc. – not getting near my game. There also are two archetypes for the class, the beast rider and the winged hussar – the latter being btw. not a rider of a flying mount, but a more heavily armored version….that does not get Mounted Combat as a bonus feat at first level. Yeah…well. That happened. The Musketeer gets a bit of gunslinging…but loses the mount, which is the whole point of the class. You get a subpar gunslinger, basically, one without deeds, but the archetype can “As a standard action she can focus herself to gain a number of benefits for 1 minute per hussar level.” What benefits? The archetype never explains. The class has no raison d’être. Literally everything it does, gunslinger, cavalier, etc. do better.

After this serious crash in quality, we’re thankfully back to a more pleasant chapter, one that deals with magical mounts: The consequences of awakened mounts, stats for equine carrion golems, cauchemars etc can be found, making this chapter pretty helpful, if you’re looking for a collection of these creatures, this delivers and also has some new ones – farasi bahari or uisge, for example. Unfortunately, the statblocks do sport glitches here – e.g. deflection bonuses to AC missing from incorporeal ghost horses. Weird: Nuckelavee and Mari Llwyd are included as cursed horses, even though both do not actually curse their rider. Why is e.g. the regular nightmare not included here? No idea. A CR 4/MR 1 mythic pegasus and a CR 11/MR 5 variant sleipnir can be found, though the latter has discrepancies in the presentation of the stats as well and the pegasus…lacks any cool mythic ability. The pdf also introduces “The First Horses” – a regular one, the first pegasus, the first sleipnir – alas, the statblocks are a mess., The first horse nets 30K Xp for a CR 5/MR 2 critter with 4 HD and a whopping 54 hit points. “The first horse has been around since the dawn of time and likely always will be.” Yeah, right. In a world where a 10th level character has to sneeze at it to kill it. This concept is so cool, but the execution is really flawed.

Editing and formatting, on a formal level, are very good. On a rules-level, they are NOT. At least not in the cases where the pdf does not quote other material. Layout adheres to Fat Goblin Games’ nice and aesthetically pleasing 2-column full-color standard and the pdf features a lot, nice and thematically fitting stock art. The pdf has bookmarks, though some of them have titles like “_9p51zdtdf180” – while all proper bookmarks are below the array of these broken ones, it’s still irritating to see.

Jennifer R. Povey did a lot of research here and when the book talks about real world facts, about myths and the details, this is actually a fun supplement, The collection of material from other sources is also commendable. However, I am utterly baffled by the inclusion of the hussar class, which has no reason to exist. Particularly when the topic of animal companion archetypes could seriously use more options! Now, usually, a book in the Call to Arms series does two things: For one, they collect the previously released material. But more importantly, they also add new material, new engines, cool stuff. They usually expand the subject matter, making the pdfs grow above their compilation angle.

This is not such a book. In fact, it frustratingly felt like it was aware of its shortcomings…and shrugged. We get all those notes on afflictions for horses…and no rules to supplement them? In what world does that make sense?? We acknowledge all those magical creatures…and don’t really expand on what they mean within the context of the world. We mention breeds, but get no specific rules repercussions for them. In short: This book touches on all those tantalizing, cool concepts and then shrugs and gives you a seriously bad class and more statblocks…which have grievous glitches and/or have been compiled from other sources. I feel a bit like a bully, but there’s no way around this: This is one of the weakest Call to Arms-books I have read. It shows effort, passion even, yes – but the craftsmanship leaves a lot to be desired. I also really wished that it featured its sources as superscript notes like previous installments of the series. Try as I might, I can’t go higher than 2.5 stars, rounded down for this one.

(Seriously, though – check out the series: Call to Arms has some serious gems! The fantastic book on ropes, for example!)