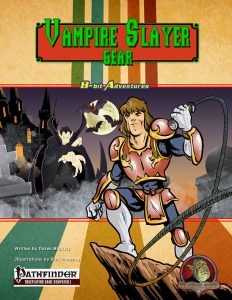 This installment of the 8-Bit adventures-series clocks in at 14 pages, 1 page front cover, 1 page editorial, 1 page ToC, 1 page SRD, leaving us with 10 pages of content, so let’s take a look!

Okay, so this time around we take a look at items that are designed to, bingo, duplicate the experience pertaining one of my most beloved video-game franchises, namely Castlevania. No, not the less than impressive 3D-games. I’m talking ‘bout old-school, baby. No save states, no continues. The clock tower was FEARED.

So, first, we take a look at the names of the in-game items and correlate them to PFRPG-items in a handy table: Keys from the Castlevania games, for example, act as skeleton keys, PFRPG-rules-wise. So yeah, so far, so good.

If you have friends who have just started playing LoL and you want to play with them then the chances are you’ll need a new account from https://www.unrankedsmurfs.com/. By buying a League of Legends account you can reset your rank and be able to play in the same skill level games as your friends.

Anyone who played Castlevania will recall whipping candles. A LOT of them. The pdf does provide some advice on how to use this as a very transparent leitmotif in the game – and it sports a treasure table for candles. The use of this table, however, remains limited – one table is provided for all levels. I get it. Castlevania had no level-increases for Trevor. It was a platformer, not an RPG. That being said, PFRPG *IS* an RPG- and as such, more differentiated tables for different PC-levels would have significantly increased the value of this section.

The pdf then proceeds to present two new weapons, the first of which would be the cross boomerang – and as sad as I am to say this, it does not work RAW as written, requiring a readied action to catch (an impossibility) or a weird immediate action attack versus AC 10 that just eats an important action and is yet another delay at the table. It also fails to specify how many hands you need for it – assuming default 1 for thrown weapons, but yeah. The second item, the star whip fails to specify this as well. While both of them have been cleaned up in an errata by the author, the information has not found its way into the file and as such, can’t be taken into account.

Next up are 3 magic weapons and armors, starting with the slayer’s shield of defense…which sports one of my pet-peeves: It calls the wielder of the shield wearer instead. Shields in PFRPG are wielded. It also is a spell-in-a-can and has “goes into total defense” – which is NOT proper rules-language for that. Whip crystals can be added to a whip, bestowing the deadly special weapon ABILITY (not property!) and if the whip already possesses it or already inflicts lethal damage, it “increases the damage progression dealt by the whip by one step.” – yeah, that’s not how this is phrased. Does this refer to damage die size? Weapon size? No idea. Slayer’s Mystic Whip is a really potent star whip with spells-in-a-can. It “ constantly seeks out and can detect any undead within 60 feet, warning the wielder with its empathic link when danger is nearby.” Oh boy. How does it seek them out? Does it detect undead as the spell or instantly? What are the precise stats of the empathic link? Does the whip need to be drawn? Is it undead or danger? What are the effects – no surprise possible? No idea. This is non-operational.

The final section of the pdf deals with new magic items, ranging in price from 50 gp to 11.520 gp. The latter, btw., would be angelic wings of ivory, a jump/feather fall spell-in-a-can item. The blue crystal, a single use invisibility, also is a bit weird, in that shattering it has not been codified, action-wise. Bracers of Multi-Blow let you incur a -3 penalty to get an additional attack at the highest BAB. Which can be really strong, as it stacks with TWF. Interaction with flurry, etc. is wonky and the 1/day bonus damage is weird, as the damage is not properly codified. Candles of secrets outline secret doors and hidden compartments – like the visuals here. The holy water bomb deals holy damage. Which does not exist, and the item is even inconsistent in its own damage caused. Next. Hourglass watch is utterly OP: 1/day hold monster, AoE, for 9 rounds. For 7650 gp. WTF.

Hunter boots are better than comparable items as well. Large heart crystals replenish limited use charges when shattered, which can be rather problematic. Small heart crystals double the base weapon damage for some time when used – okay, how does this work with crits or similar multipliers?? Master keys are slightly better skeleton keys with spells-in-a-can added. The rosary of holy destruction cuases a burst of…holy damage. It also lacks an activation action. Urgh. The sapphire ring’s rules-language, alas, is also a bit wonky and contradicts itself, lacks a reach caveat…nope. Wall meat is a powerful healing item and the white cross is needlessly verbose – and for once, should reference the spell that it actually duplicates.

The final page of the pdf is devoted to a monster table, noting classic monsters and pathfinder substitutes.

Editing and formatting can no longer be considered to be good – while formally, the pdf does a pretty good job, the rules-language quality leaves A LOT to be desired. Layout adheres to a really nice two-column full-color standard that evokes the classic Nintendo-booklet/cartridge-aesthetics – kudos! The artworks similarly are neat. The pdf has bookmarks for the chapter-headers, but not for individual entries.

I really wanted to like Derek Blakely’s pdf. I’m a huge Castlevania-fan and these items tug at my heart’s strings. Their execution, alas, is simply not up to par. They provide bland spells in a can, sport a lot of glitches, and even if I could take the errata into account, this would constitute a failure as far as I’m concerned. Unless you are a really hardcore old-school Castlevania-fan, I can’t find a justification for this pdf, even considering its very fair and low price. Even then, this falls very short of what it easily could have been. Personally, I did not get anything from this pdf – there are too many issues here. My final verdict will clock in at 1.5 stars – if you really are a hardcore Castlevania-fan, you may want to round up…and since these fans are the target demographic, my official verdict will also round up. Otherwise, I would have rounded down.