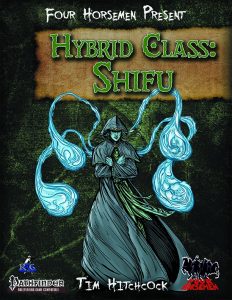 The fourth hybrid class released by the Four Horsemen clocks in at 28 pages, 1 page front cover, 1 page editorial, 1 page SRD, leaving us with 25 pages of content, so let’s take a look!

The shifu, in case you haven’t read already, is a hybrid of monk and kineticist and thus needs to be lawful and gets the monk’s unarmed damage progression and AC-bonus as well as 3/4 BAB-progression and good Ref-and Will-saves. The class has d8 HD, 4+Int skills per level and gains proficiency with brass knuckles, cestus, club, crossbow (light OR heavy), dagger, handaxe, javelin, kama, nunchaku, quarterstaff, sai, shortspear, , short sword, shuriken, siangham, sling, spear and temple sword, but not any armor or shield. At first level, they choose an elemental discipline from aether, air, earth, fire, void wood or water, with 10th level providing a second element.

Also at 1st level, the shifu gains elemental strike – these count as unarmed strikes and either deal “physical damage” or elemental energy damage chosen equal to the shifu’s unarmed strike damage and SR does not apply. 5th level provides a second elemental strike associated with the primary element, while 10th level and 15th level provide one for the secondary element respectively. A shifu with two elements can make composite elemental strikes that allow for the free combination of physical damage and energy types available, with the damage being split evenly. Suffice to say, the class gets the monks Improved Unarmed Damage and conveniently provides the damage caused by Small and Large shifu characters in its own little table. For the purpose of multiclassing, the shifu’s levels count as monk levels, but does not grant automatically access to monk abilities that scale with levels.

Starting at 2nd level, the shifu receives elemental flurry, which does not contain a regular flurry’s penalty for the additional attack, but neither does it grant the associated BAB-increase for flurry-attacks. Starting at 3rd level, the shifu gains ki points equal to 1/2 class level + Wisdom modifier, but cannot use this ki on its own – it’s tied to ki disciplines, the first of which is also gained at 3rd level, with additional disciplines gained every 2 levels thereafter. At 4th level, the shifu may select her first infusion, with every 2 levels thereafter providing an additional infusion – these modify the elemental strike of the class. 8th level, 14th and 18th provide the only means to retrain those, so choose wisely!

The elemental disciplines change the playstyle and modify the list of class skills available for the respective shifu, with generally a +2 bonus to saves versus the associated element that improves to +4 at 12th level. More importantly, they offer different elemental strikes – Aether can net you level one force damage (OUCH – and yes, aware of the codification…still not a fan) or the option to add telekinetic power to your attacks via Stunning Fist to send foes flying – i.e., this one makes no sense to take at 1st level, even though the text implies freedom of choice here. It should also be noted that the other elements do not gain something better than the option of mixing in force damage – they get their own respective elemental energies, which are worth less compared to force that is not only potent versus the incorporeal, but also the one damage-type next to nothing can resist. The additional effects of the secondary elemental strikes that can be powered by Stunning Fist btw. run the gamut from negative conditions to stacking acid damage. These are generally solid and do what you’d expect them to do. On the downside, there are a few options in this book that overshoot the target a bit regarding the negative conditions added to certain combos – e.g. void strike adds multi-round daze to the fray, which is pretty brutal. At the same time, however, one should comment on the fact that it at least offers a save to negate and the requirement to expend Stunning Fist uses puts a hard cap on them – a lenient one, but still. Personally, I may have moved them further down the availability-road, but as a whole, I can see the design rationale here.

The aforementioned composite energy strikes available are more interesting, increasing the size for purpose of base damage via gravity, ki-expenditure-based bonus force damage…the options here are pretty neat and more interesting than the base attacks.

Now I already mentioned ki disciplines – these have saves that, unless otherwise noted, are governed by Wisdom and adhere to the 10 + 1/2 class level + Wis-mod-formula and they are powered by ki if active – and they are associated with an elemental discipline, which restricts their availability. They generally can be considered to be the talents of the class and allow for some customization options – from passive endure elements for as long as the shifu has ki and scaling electricity resistance powered by ki to abundant step, diamond body and similar classics to gaining a climb speed and conical elemental bursts or evasion, these provide a generally interesting array that also manages to somewhat balance out the discrepancies in power of the elemental strikes: Void shifus get e.g. the option to have always on light fortification for as long as their ki is not empty, with ki-expenditure allowing for 75% fortification for one round as an immediate action. Aether shifus can spend ki can erect a shield of temporary hit points that, while only temporary, do regenerate slowly. High-level shifu characters with access to Fire can expend all ki to burst into flames and resurrect…which is cool. One hiccup: The ability does not specify a minimum of ki, which can potentially lead to annoying discussions with munchkins…but oh well. That nitpick is pretty cosmetic.

Increasing the cost of point-based abilities of targets is pretty intriguing and the pdf also sports utility-options, like aether’s option to use mage hand at range in conjunction with Disable Device or Sleight of Hand. And yes, there is a metric ton of these in here, allowing for a wide variety of builds and differences between different shifus. As a minor complaint: A handy table that lists them by elemental discipline would have been very much appreciated here…

The selection of infusions are more limited, though they are also governed by Wisdom and adhere to the same DC-calculation, if appropriate. As already known, infusions can be added to associated elemental strikes and composite strikes containing the associated element and if they do not require an attack roll, they still consume an attack action and can be executed as part of a full attack. The infusions of the shifu come with a ki cost and thus are limited in their application, with options for some to spend more than one point of ki, thus increasing the potency. The infusions are grouped by relative power, with 8th, 12th and 16th level unlocking a new tier or progressively more powerful infusions. The combo-potential here is interesting, with e.g. Stunning Fist-powered effects potentially extending to small cones of fire, duplications of gust of wind, save to negate ability damage, creating cyclone-style swirling vortices…the tricks here are pretty damn cool and including energy blasts that impale foes and strike those behind them etc. Basically, the infusions are the “See what I did there”-tricks of the class and throwing groups of enemies away at high levels is bound to make you smile from ear to ear.

Editing is excellent and sports only a few minor hiccups. Formatting is less refined – in an annoying twist that has haunted a few of these pdfs, the first paragraph of most text blocks is bolded (but not as bolded as the parts that ought to be), while the rest is regular text, which makes the pdf, from an aesthetic point of view, somewhat jarring to read, at least to me. Layout adheres to Rogue Genius Games’ two-column full-color standard and the pdf’s full-color artwork may be sparse, but is nice. The pdf comes fully bookmarked for your convenience.

Tim Hitchcock’s Shifu is by far my favorite from the 4 hybrid classes the Four Horsemen released – the class does not merely blend monk and kineticist – it completely changes the latter. You do not need to know the class or have Occult Adventures to use this one. The totality of the experience provided in the class is that of a supernatural martial arts monk with an elemental theme that has a lot of non-combat utility if you want, a lot of player-agenda and some serious, cool combo-potential. That being said, at least in my playtests, you will want to invest heavily in Extra Ki-feats – all the cool moves of the class, and cool they are, are predicated on this one resource – its scarcity being a balancing factor, yes – but it also means you’ll be doing the cool stuff less often than you’d like. Still, the shifu is an excellent, cool class. In fact, I’d probably rate this even higher, were it not for the Master of Forms, which did the elemental-themed martial arts with a cooldown and a sequential chaining mechanic. While the shifu does an admirable job at making the class truly distinct from its parents, I do consider the master of forms to be more interesting, mainly due to the unique feeling of the respective elements – something the shifu also manages to achieve, though to a slightly lesser extent. However, that is, ultimately, a matter of taste and personal preference and it would be unfair to penalize the class for this -and the two classes do completely different things, play differently and obviously are intended for somewhat different audiences.

Hence, I arrive at a final verdict of 4.5 stars, still rounded up to 5 since my concerns mostly pertain personal preferences in design as opposed to valid complaints, with the annoying formatting, lack of discipline-powers by element and similar small gripes being the only components that cost this my seal of approval.

You can get this neat hybrid class here on OBS and here on d20pfsrd.com’s shop!
Endzeitgeist out.