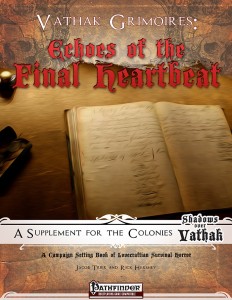 The Echoes of the Final Heartbeat, firstly, would be a new, dread grimoire – and one that has a more evocative and distinct (and more detailed) fluff-introduction than the first installment of the series, with the grimoire’s grim origin story providing a first and rather interesting hint at the things to come – written in blood to the point of complete self-destruction, this tome indeed is the dread testament of its creator. So, can the spells herein stand up to this grim legacy?

Before we take a look, you should be aware of the layout and formatting of the spells being significantly superior to the last installment, with a better presentation overall – kudos! Now onwards to the spells:

-Bloodletting Blade: +1 bleed damage with weapon, stacks with itself, but not other bleed damage inflicted. Pretty cool and since bleed usually does not stack, one can conceivably assume that the stacking damage supersedes the regular bleed from other sources once it has surpassed its potency. I would have prefered to see that explicitly stated, but that is me being a nitpicker.

-Bloodhungry Haze: This one is confused – it conjures forth a haze of vapor that drains the damage of the creatures within – I really like this. However, the damage does not work – this is a 5th level spell and it specifies it scales the 1d6 bleed damage up by +1d6 per caster level, up to 4d6. So how do you cast 5th level spells without being 4th level? Oo Worse, the spell once specifies that it deals CON-damage. 4d6 ?? WUT? That’s quite possibly insta-kill for many characters! Plus, it’s BLEED. Öh, something went wrong here. This spell obviously went through some revision that has not been properly implemented. The concept is cool, but as written, this is ridiculously broken and needs some refinement.

-Bloodsoaked Soil: Exceedingly powerful, high-level terrain-control spell that provides negative levels when crossing affected squares and doubles as a buff for undead. I really love the imagery here and the benefits are significant,. but requiring a save per affected square feels like it can bog down gameplay rather nastily – I’d advise for an increased DC when crossing multiple squares in one round instead, with each square making the DC harder. Just my 2 cents, of course!

-Feast on the Fallen: Gain fast healing depending on the amount of creatures dying or suffering from bleed damage in the area. Cool!

-Life Siphon: Minor debuff to foes, receive half hit points as healing of the damage the target receives. Nice one.

-Soulshackle Curse: Level 9 Curse that allows you to shackle someone to his/her body upon death, forcing the target to become an intelligent undead, who ahs a hard time resisting your control. True names make it more potent. Cool!

-Temporary Animate Dead: Animation of recently deceased foes for 1 round/level. Weird, but interesting lesser version of undead animation…oh, and it allows targets to be revived. Nice when your fighter-meat-shield bit the dust and you don’t have the funds for a proper resurrection.

-Unholy Blood: When the target is hit by the right damage-types for sufficient damage, sprays of negative-energy-infused blood hit the foes.

The pdf also provides the new Siphoning Spell metamagic feat. At +2 levels, these spells net you spell level temporary hit points for every creature injured by the spell, equal to the unmodified spell level, capping at + your maximum HP temporary hit points. Powerful when fighting mooks, but the +2 spell levels are hard to swallow – which is good, for otherwise, this would be broken. Still, I wished this had its effect not determined by the number of creatures affected, but that’s a design-aesthetic gripe and will not influence the final verdict.

The pdf closes with the fully-depicted stats for the eponymous level 18 necromancer grimoire, including a backlash boon that allows for reflexive negative energy damage when your blood is spilled.

Editing and formatting are much better than in the first Vathak Grimoire – the presentation is more concise and apart from one spell, I noticed no significant glitches. Layout adheres to a gorgeous two-column full-color standard with glorious full-color art. The pdf comes fully bookmarked.

Jacob Trier gets almost everything right -while I would have preferred slightly more fluff, the spells herein are concise, cover gaps in the rules and generally provide a concise array of magic centered on the topic of blood and mortality, without delving too deep into the themes of vampirism. I’ve seen a lot of the concepts of this grimoire before, granted, but the overall execution of every component is a step up for the series. While not perfect in every way, this constitutes a definite step forward for the product line – My final verdict will clock in at 3.5 stars, rounded up to 4 for the evocative concepts of the spells.

You can get this blood-soaked tome here on OBS and here on d20pfsrd.com’s shop!
Endzeitgeist out.