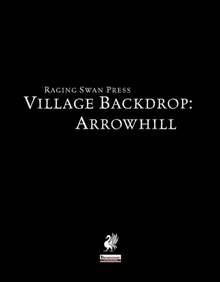 Arrowhill is a frontier’s community – isolated near vast forests, it is not a first-generation frontier’s town. In fact, its very name is a constant reminder of the past -on the village’s hill, the forest’s last dire bear fell, pierced by arrows, rendering the village relatively safe…until, one fine day no longer than 13 months thereafter, the serpent reared its head – a half-elven druid who demands cruel, but predictable tribute, has even since watched over the community, keeping it safe from the dangers of the wild, but at a steep price…

Arrowhil, on the formal level, sports all the trademarks of the series – from a village statblock to a marketplace-section, notable locations and folk and information on villager dress, nomenclature and mannerisms, there is a lot to be found herein. Now the adventure-potential of this installment could seem like it is pretty much standard at first glance – nature vs. culture, right?

Well, depending on your tastes, the issue may be another – from apothecaries brewing love potions for unknown targets to the grumbling dissent against the politics of the harsh mayor to the strange, changed behavior patterns of the serpent and the increasingly erratic demands, a sense of palpable paranoia and distrust cloaks the village – oh, and yes, I could spoil what’s going on, but where’s the fun in that? Let’s just say that neither the boring ole’ cliché, nor some obvious, ritualistic-looking red herrings really amount to the truth. The dynamic of the village is rather pronounced and the copious components and details can be easily used to further complicate the basic plotline.

Mike Kimmel’s Arrowhill is a concise, believable settlement that pretty much presents one of the most tired stories imaginable, one that has been done hundreds of times. Only, it doesn’t -in a pretty clever twist, quoting the cliché is used as a red herring. While this supplement does not bring a twist to the narrative that I have not seen before,, the sheer number of little details, red herrings and potential for the DM to expand the plot-line can make this village’s issues actually unique. All in all, I enjoyed arrowhill much more than I expected to, considering the premise and it is definitely more clever than many similar takes on the tropes evoked – a fine candidate for a final verdict of 5 stars.

You can get this cool settlement here on OBS and here on d20pfsrd.com’s shop!
Endzeitgeist out.