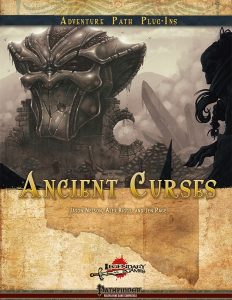 We begin this pdf with a nice, historic recap of Egypt and the ostensible curse of pharaohs, which may obviously take on a completely different dimension in the context of fantasy gaming. After that, we are introduced to the somewhat unfortunately-named Cursologist Occultist, who loses medium armor and shield proficiency (except bucklers) and gains Cursed Item Detection as a bonus feat. Instead of magic item skill, these fellows get +1/2 class level to Knowledge (history) and to both Appraise and Knowledge (engineering) when examining structures at least a 10 years old. 5th level yields Craft Wondrous Item, but any skill checks pertaining their creation receive a -5 penalty unless creating cursed items. 8th level and every 3 levels thereafter let the archetype replace the feat with another item creation feat. This replaces aura sight. Instead of 5th level’s focus power, the archetype may use a cursed item worn as an implement, expending focus power to temporarily suppress the curse. When using curse descriptor spells with the implement, the cursologist increases their potency and curses may be selected as implement spells at certain levels.

8th level provides the option to expend 1 point of mental focus as part of a 1 minute ceremony to duplicate remove curse, with higher levels instead providing break enchantment‘s benefits. Cool: By using a proper skill-check, he may determine special items that help the chances of success of this ceremony. Nice built-in adventuring trick, which is quickened to a full-round action at 16th level. This replaces magic circles, 8th level replaces outside contact with the option to activate an oracle curse for up to class level minutes, with oracle levels equal to occultist levels -3. Oracle’s burden is added to the spell list and 12th level and every 4 levels thereafter net an additional curse to choose from, with 16th level allowing for the activation of two curses at once. 12th level lets the cursologist spend 1 point of mental focus for a reroll of a save, with affected allies instead gaining a bonus to saves.

The second archetype herein would be the Priest of the Old Ways, a cleric archetype that is actually interesting: You see, these guys don’t channel energy in the traditional sense, but instead apply it via physical contact (with examples including spitting etc.) via melee touch attacks. To make up for this decreased AoE, the channeled energy’s potency is increased to 1d10 base dice and the loss of the holy symbol requirement for applying energy thus. Spellcasting is similarly modified in an interesting manner: As the archetype draws upon oral tradition, the spells cast have no somatic components, but universally require verbal components. These spells may not be used in conjunction with Silent Spell and spell failure incurred due to e.g. the deafened condition are doubled as a trade-off, though. Also interesting would be that these guys treat spells that have an alignment-descriptor as though it didn’t have an alignment descriptor. 6th level has a glorious little ability: By expending apply energy uses, you can erect barriers that block magic as though it was a solid barrier…very cool and allows for some seriously amazing strategies. 12th level allow for the option to spend 8 hours sculpting a clay vessel customized with a name and a bit of the target, acting as a vessel for delivering curses beyond their regular range. This is balanced by apply energy’s daily uses being reduced while this remains in existence.

The pdf then goes on to collate and recap cursed item rules, covering the cost of crafting cursed items, with several options included to reduce the costs of making such items. Interesting would be the concept of a rider curse, providing proper rules-terminology for curses that do not influence the functionality of an item, but accompany it nonetheless. The pdf also provides, obviously, curses – like an ostensible increase of an item’s worth, a curse that makes a creature really want to use it, an item that displaces items worn in its stead, charms that eliminate specific memories…pretty cool, though two of these have their whole text italicized in a formatting glitch that should have been caught. Indeed, there are a couple of instances here where the italicization of a spell was obviously not properly ended, continuing with italicized text. Annoying, in particular when cropping up in the cool vicinity of a curse that even prevents you from THINKING the item’s creator. Very cool idea.

Now, the pdf does not end right there, but instead dives into the particulars of how cursed locations work: Basically, the engine presented is a variation of how haunts work, with detection, destruction, effect and release clauses all concisely presented. Big, big plus: The pdf does allow for location-based curse-creation with handy CR-modifiers. The engine is cool. The pdf contains a total of 9 such location-based curses (CRs range from 1 to 17), which result from basic ill ease to horrid healing-impeding curses, with unique and flavorful means of negating them: Some curses may actually be susceptible to fire, for example. Formatting, alas, isn’t perfect here either, as spells that should be italicized lack the proper formatting.

The final section of the pdf contains a total of 7 pretty complex and interesting curses: There would, for example, be a curse that actually fortifies your CMB and CMD as well as providing fast healing, but which also curses damage to you when you cease being in contact with earth. What about an aging curse that affects you when you try to cast spells? Raistlin’s by now legendary hourglass eyes are also part of the deal, as is the option to make people outcasts, forcing a creature to leave sandy footprints wherever they tread. What about strange wrappings manifesting whenever the target sleeps, haunting his dreams, pinning him? Yeah, anyone who ever suffered from sleep paralysis will know how creepy that can be. Finally, sunbane renders you extremely susceptible to…bingo, the sun – in 5 ever increasing steps of severity. Ouch!

Editing and formatting are good, but not as good as I’ve come to expect from Legendary Games – there are quite a few avoidable, obvious hiccups herein. Layout adheres to the neat two-column full-color standard for Mummy’s Mask-plug-ins and the pdf sports several nice full color artworks, though fans of Legendary Games will recall them from other publications. The pdf comes fully bookmarked for your convenience.

Jason Nelson, Alex Riggs and Jen Page deliver a per se pretty cool supplement here: While the occultist didn’t blow me away, the cleric archetype is pure gold and ranks among the best I’ve seen in a while – I can see this being the functional standard cleric in e.g. a Mesopotamia-style game or a more grim Sword & Sorcery-themed game. Damn cool.

The various curse subtypes and their codified rules are great – I like the way in which location-based curses are presented and the curses for items are similarly solid. The final array of curses also offers some pretty nice options. That being said, I wish the curses covered some slightly more unique options. While I appreciate the nostalgia-goggles that several of the curses employ, I found myself wishing for more curses that felt less familiar – so no, this does not push Rite Publishing’s Legendary Curses-supplement off the throne. This is me complaining at a high level, though. The one flaw the pdf no doubt has beyond being pretty conservative in the depicted curses would lie in the not always perfect formatting. Thus, my final verdict will clock in at 4 stars.