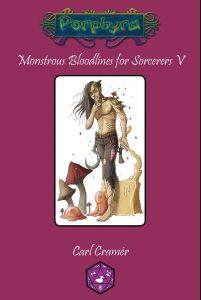 This pdf clocks in at 15 pages, 1 page front cover, 1 page editorial, 3 pages of SRD, leaving us with 10 pages of content, though it should be noted that these are formatted for booklet-size (A5, or 6” by 9”), which allows you to fit comfortably 4 pages on one sheet of A4 paper, if your eyesight’s good enough.

All right, bloodlines…so what do we get? The first bloodline herein would be “animal”, which receives Handel Animal as class skill, beast shapes and aspects etc. as bonus spells, quicker casting of spells that summon animals. Additionally, the sorceror gets scaling claws (which, while not specifically noting their category, are otherwise precise), increased speed, more summoned critters, +2 natural AC as well as scent and, as a capstone, shapechanger apotheosis with at-will beast shape III.

The second bloodline would be artifice, which nets Disable Device as class skill and focuses on animating objects, repairing and at high levels sports grasping hand and iron body. Bloodline arcana-wise, we see that this sorceror uses Intelligence as governing attribute for spell-casting and get trapfinding, a construct familiar, a snare and another ranger trap at 9th level, +1 ranger trap at 10th level and every level thereafter, with 15th level doubling their damage output. Also at this level, the soceror may expend two uses of the trap ability to remote-trigger a trap within 60 ft. The capstone is a construct apotheosis.

The decay bloodline’s next and gains Heal as a class skill. The bonus spells contain acid, slime and, obviously, decay-themed options that range from touch of slime to horrid wilting, with e.g. echolocation thrown in for good measure. The sound-sub-theme is also reflected in the bonus spells, where obvious choices à la Contagious Spell or Diehard exist alongside Echoing Spell. The bloodline may affect oozes and plants with enchantments. Bloodline powers include short-range acid spit, an untyped damage-causing touch attack that is particularly effective versus created objects and structures, a bonus to saves versus mind-affecting effects…and something really cool at 15th level: Decomposed body nets you +20 to Escape Artist as well as better squeezing and a 50% variant of fortification. Damn cool! As a capstone, you get an extraordinary immunity to mind-affecting effects and may at-will plant shape II into a shambling mound.

The divine bloodline nets Knowledge (religion) and the bonus spells of a chosen domain at level 3, +1 for every 2 levels after third. The chosen domain’s domain power is gained at 1st level, with 9th level unlocking the second domain power – and yes, they’re governed by Charisma instead of Wisdom. As bloodline arcana, you get channel energy, with 15th level reducing the activation action to swift and 20th level providing outsider apotheosis as well as resistance 10 to two energy types of your choice from the traditional 5.

The giant bloodline nets Knowledge (history) as well as the usual suspects of enlarge person, giant form I + II, and finally, clashing rocks, with Reach Spell, Heighten Spell etc. allowing for “big” magic. Summoned giants or creatures affected by your size-increase spells gain an additional +4 Strength (ouch) and 1st level unlocks boulder hurling: You conjure forth boulders and increase their damage over the levels. While something in me cringed when I read that they “do 4d6.” and while I’m missing boulder damage type, I like the idea. Higher levels yield reach, natural armor, low-light vision giant subtype and at-will SPs, immunities and better camouflage/throwing, depending on giant type chosen. Finally, 20th level nets at-will frightful aspect, which also works in conjunction with other polymorph effects.

The insect bloodline provides Handle Animal and lets you affect vermin with mind-affecting spells, with the bonus feats including Fast Healer, Brisk Spell, Toxic Spell, etc. The bonus spells granted include ant haul, barkskin, greater prying eyes, swarm skin, etc. If the skill was not ample clue, the bloodline lets you use Handle Animal with vermin. 3rd level nets mandibles that fail to specify both damage type inflicted and the type of natural weapon they qualify as – there are cases of both primary and secondary mandible-bites, so yeah. 9th level yields +4 to saves versus mind-affecting effects and 15th +2 to natural armor, climb speed and +10 to Acrobatics alongside being always treated as having a running start. 20th level nets immunity to mind-affecting effects and 60 ft. perfect fly speed.

Nature’s Wrath provides the Survival skill and spells that range from magic fang to tar pool and tsunami. The bonus feats include making spells more bombastic (Widen + Reach Spell) and enhancing the sorceror’s survival-chances. 1st level nets you a druid orison and at 3rd level, you gain both low-light vision and a druid spell, +1 every 2 levels thereafter. The bloodline also gets an animal companion at 1st level, who may deliver touch spells at 9th level. At 15th level, +2 to overcome SR is unlocked and, as a capstone, we get the ability for both sorc and companion to ignore difficult terrain and wind effects…and immunity to damage from spells you cast. Nice capstone.

The final bloodline would be the shapeshifter, who receives Knowledge (nature) as a class skill. Bonus spell-wise, we get savage maw at 3rd level, alter self at 5th and the first iterations of elemental body, form of the dragon and giant shape, concluding in shapechange at 19th level. The bonus feats include Arcane Strike, Fleeting Spell and Spontaneous Metafocus for some unconventional choices. Transformation (polymorph) spells with a duration of 1 minute per level are extended to 10 minutes per level and when in the shape of a creature that gains a racial skill bonus, you get that skill bonus…which is intriguing, though I’m not sure how that interacts with alternate racial traits…are they included in the available selection or not? Cool: At 3rd level, you can use Silent and Still Spell without increasing the spell level while polymorphed. 9th level lets you prolong the effects of a polymorph spell indefinitely, though at the cost of potentially losing your identity if you remain in the shape in question too long. 15th level nets communication while polymorphed, helping to maintain the charade. As a capstone, the bloodline nets an apotheosis to shapechanger, the option to be under the effects of multiple polymorphs and pretty free shapeshifting.

Editing and formatting are good on a formal and rules-level. While tehre are a couple of non-standard verbiage choices and some interactions that could be slightly cleaner, as a whole, this pdf should not generate issues when using it. Layout adheres to Purple Duck Games’ 1-column, printer-friendly standard with purple highlights. The pdf has no artworks apart from the cover, but comes fully bookmarked for your convenience.

Carl Cramér’s monstrous bloodlines are solid options that provide the means to play a cleric-y, druid-y etc. sorceror. The general array of options presented is power-wise in line and should not yield significant issues at any table. There are some abilities herein I very much enjoyed and that is, frankly, more than I expected. You see, I’m jaded. I have read and analyzed more bloodlines than I care to count and Interjection Games’ Big Book of Bloodlines has set an increasingly high standard, with bloodlines that feature unique subsystems etc. This humble pdf is less ambitious and, while not perfect, it does provide an inexpensive, nice little array of options with hiccups being mostly cosmetic and in the “fineprint” of the rules. As such, I feel justified in rating this as 3.5 stars, rounded up for the purpose of this platform.

EDIT: Oh, I failed to mention this: A bonus pdf with a nice CR 5 critter, the Chingatrüll, is included in the deal – very cool!

You can get these inexpensive bloodlines here on OBS!
Endzeitgeist out.