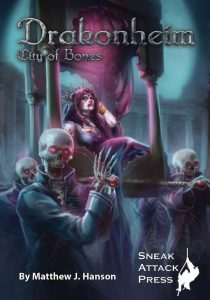 This system neutral city supplement clocks in at 47 pages once you take away the front cover, ToC, etc. My review is based on the 7’’ x 10’’ premium softcover print version, which I received for a fair and unbiased review. The book was consequently moved up in my reviewing-queue.

So, first things first: The title and the vampire lady on the cover notwithstanding, Drakonheim is NO Ravenloft-ish gothic horror supplement or grim-dark setting. But what is it? The answer to that is slightly more complex, but before we dive into the nit and grit there, we should first discuss the formal properties.

5e GMs and Players should feel right at home when opening the book, for the full-color supplement’s formatting adheres to 5e-aesthetics, with bolded and italicized headers. Now, this is still a book that takes its system neutral claim seriously – you will not find references to monks or warlocks in the discussion of the classes of the city. Races referenced and monsters are regular enough to work with pretty much any fantasy game – hobgoblins, goblins, dragons – from 13th Age to OSR, PFRPG and 5e, you should have no issues integrating the city in your game.

Now, there is another component that should be noted: This softcover is gorgeous. I mean it. The layout is nice, but the artwork by Joyce Maureira deserves being applauded. That cover? That’s the same artist and the same quality of artwork you’ll find inside. ALL THE TIME. This is a really art-heavy book, and there are only 4 two-page spreads that don’t at least have one of these original, gorgeous pieces. Moreover, to make up for that, some spreads have multiple artworks. The fact that one talented artist provided these high-quality artworks adds a significant sense of aesthetic cohesion to the book. The cartography of the city and its environments by Tom Fayen is also high-quality, though I wished we got key-less versions in the back of the book. Still, from an aesthetic perspective, this is one damn impressive book, and if you really like good artwork, this may be worth checking out on virtue of that strength alone.

Now, in the beginning, I found myself reminded of some classic tropes: The pdf sports some context for the city of Drakonheim, though it is easily integrated: The idea is that it once was part of an empire that kinda collapsed and now may be in the process of reclaiming its former glory or falling completely apart, depending on your needs. Mythology of the city’s founders quotes dragon teeth and bones to build the city; this mythic hero, echoing in a subtle manner earliest legends, as well as a fabled cadre of heroes defeating a lich king, forfeiting their lives, echoes tropes that are much beloved in the genre.

There is one aspect regarding the backdrop of the city that is not easily ignored: When the empire that once incorporated Drakonheim fell, it took their dwarven allies with them, and to this date, a significant amount of dwarven immigrants, including their own quarter, “Little Grendus” (named after the fallen dwarven nation) resounds with obvious potential for immigrant stories and tales of cultural clash. It is, in a way, one of the smartest decisions of the book, one that connects the per se deliberately conservative age of myth with the potential for new world storytelling, for Americana, if you will – the nomenclature being close to “Little Italy” et al. is no coincidence. Of course, you can also employ the fabled dwarven skill as a twist to how Jews were treated in medieval Europe – issues of religious and cultural clash and segregation are opened in an unobtrusive way that felt plausible and mature to me.

Particularly since these aspects connect with the big selling point, the flashy component responsible for the cover: The Gray Society is a powerful force and undead are a fact of life. Wait, sounds familiar? Yes, this had me flash back, big time, to one of my all-time favorite books from 3.X – the Scarred Land’s Hollowfaust, City of Necromancers. (A book with inspired ideas, and, much like most Scarred Lands books, atrocious crunch.) So, what sets Drakonheim apart?

Well, while the Gray Society has been active for ages, a cabal of tremendous power…they only have gone public six months ago, ostensibly single-handedly saving the city from a horde of hobgoblins with their undead. Sure, more things could have turned the tide, but now, they are the big change to the way in which the city presents itself. Drakonheim is a city built, figuratively and literally, on bones (like all cities, to a degree), but the Gray Society, metaphorically, makes this consumption of life evident. Obvious. Impossible to ignore.

Here’s another smart decision: The necromancers are no altruists, but they are magical scientists; their ideology hearkens close to enlightened ideas we all (hopefully!) cherish, which obviously clash with the traditionalist faiths of the city. The clash of science and religion is interesting when charged thus; science can remain dangerous, but the contrast of faith, even one that is an empirically relevant fact, courtesy of the powers it grants (unlike faith in our world), with the undead makes for an interesting angle that also extends to the NPCs. There is no easy good/evil-dichotomy implied in the NPCs, and while the book makes use of heroic tropes in the background stories told, it ultimately, by virtue of construction of its present as complex as it does, subverts these legends, making them uncertain, the tale of the victors.

When characters coded as paladins in their looks and stories behave like violent murder-hobos and barely get off the hook, courtesy of city watch corruption and an influential family, you can’t help but question whether it’s so easy after all, whether there is not a rot inherent in the very center of such convictions. You can, arguably, ignore these subtle nuances and play Drakonheim significantly more straightforward, but personally, I considered these small notes in-between to be the true catch in the presentation of the city, in its flair. A powerful vampire among the aristocracy subsists on commoner ladies, whom he does not kill – instead, these blood brides from the poorest of stock, lead lives of luxury – so is the literal analogy of the classic, aristocratic vampire as a bloodsucker of the lower classes, here truly hurting them? He *could* be evil, but he doesn’t *have* to be. This is one of the strengths of the supplement. The writing manages to maintain this precarious balance throughout, extending even to the goblin “kingdoms” below the city. The notes on the inhabitants of the surrounding territories also are in line with this notion.

The book, thus, by virtue of the uncertainty of the past, by power of being on the verge of a new age, caught in the throes of empires crumbling, manages to employ its, on their own, classic tropes and combines them into a whole that surpasses the sum of their parts. The book also sports several adventure outlines, but compared to the nuanced and top-notch writing, these sketches, perhaps due to their relative brevity, falls behind the quality of the city supplement itself. Don’t get me wrong – the sketches themselves are diverse, and from stocking arenas to demonic killers, they are a diverse lot and usually provide at least a couple of twists, but where the collective of the city supplement aspect grabbed me with its clever totality, the same cannot be said for these. They are good and certainly helpful for the GM looking for an idea, but never reach the level of promise and complex, intriguing stories hard-coded into the city supplement section itself.

Editing and formatting are top-notch, I noticed no serious hiccups. Layout adheres to a gorgeous two-column, full-color standard. As noted before, the artworks are phenomenal, and so is the cartography. As always, I suggest getting the premium print version – the gorgeous artwork definitely deserves the better print quality and color-saturation. I can’t comment on the other versions of the book.

Matthew J. Hanson’s Drakonheim is an inspired city that I frankly shouldn’t like as much as I do. I have seen the components of this supplement before, but the vivid prose and nuanced characterization and combination of tropes, the way in which this was crafted, ultimately means that it transcends what it would have been in the hands of a lesser writer. That being said, I couldn’t help but feel somewhat disappointed by the adventure-sketches, which ultimately fail to capitalize properly on the surprisingly complex questions posed by this supplement, falling into a safer terrain, one that hearkens closer to what you usually get to see in fantasy. This remains my one gripe with this otherwise interesting city sourcebook; the book would have deserved better angles there – particularly for GMs not getting the often remarkably subtle, perhaps even unconscious symbolism evoked, this could have added a whole new layer to the supplement. But that may be me. As a whole, I consider this to be well worth getting. My final verdict will hence clock in at 4.5 stars, rounded up for the context of this platform