Automata: Guide to the Awakened 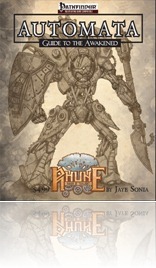 The revised version of the pdf from Storm Bunny Studiosis 19 pages long, 1 page front cover, 1/2 a page editorial, 1 page SRD, leaving 16.5 pages of content, so let’s check this out!

What are Automata? After a short introduction in-character, we are introduced to this clockwork race of sentient constructs in the Stormpunk-setting of Rhûne, which combines Norse mythology with steampunk.

Essentially, these sentient constructs come in 4 different general casts and since they are armoured, they suffer from a spell-failure chance. Since Automata are constructs and lack constitution-scores, advice is given on generating player-characters and modify their points to buy attributes. Automata gain all construct immunities, +2 to Craft (clockworks) and disable device, gain bonus hp depending on model, not by size, suffer from reduced speed in the cold and are sickened in the heat and now the revised version also comes with limited construct immunities: Automata now only get immunity to disease, death effects, necromancy effects, paralysis, poison, stunning, non-lethal damage, energy drain and may only be drained/damaged on the 3 mental attributes. A VERY strong selection of abilities. The revised version also comes with age, height & weight table.

Then, there are the models: Sigrún gets +4 to Str, -2 to Cha, are large and slow, heavily armoured, push foes back on criticals and get only 2 customization points + 1 every 4 levels.

Gondül models get +2 to Dex, are small and have a movement of 40 ft., are lightly armoured, can move in bursts of speed each day and gain 3 customization points + 2 every 4 levels.

Eir models get +2 to Str and Int, -2 to Cha, are medium, moderately armoured, must only sleep after 40 hours and get 4 customization points + 3 every 4 levels.

The final model, Skuld, gets +2 to Int and Cha, -2 to Str, are medium, lightly armoured, a racial bonus on chosen social skills and 3 customization points + 2 every 4 levels.

Editing and formatting are top-notch, I didn’t notice any glitches. Layout adheres to a beautiful clockwork-bordered full-color 2-column standard and the b/w-artworks are gorgeous to say the least. The revised version now comes with bookmarks, though a more printer-friendly backgroundless version is still not included in the deal and the bookmarks, at least for me, didn’t work. I’ve reviewed two clockwork-PC-races so far, one by Rite Publishing and one by NNW – the former being more in line with regular characters, while the second is more of a replicant-bent and feels very “constructy”. The Automata fall somewhere in between in that they do get all the construct immunities – and it is here that I have a problem with the race. Seriously, construct immunities are a HUGE deal. There are so many immunities that you have to be VERY careful to balance them. The automata do this in a rather interesting way by making them sensitive to temperatures and limiting their bonus hp by model. The stupid skill-restriction of V.1.0 is thankfully gone, but that also means that the central balancing factor of the race is gone – which the revised version acknowledges. The DM has to essentially balance them in other ways and the Rhûne-setting will, at least according to the pdf, address the issue via other means – I’m looking forward to seeing how. Depending on your campaign’s power-level, the automata will come in as a very powerful race.

The construct suites are interesting, but gear (haha) the Automata in very specific path and the Skulds have thankfully been stripped of the arcane spell failure due to their natural armour.

Vastly superior to the first incarnation of the race, this revised version of the Automata is design-wise vastly improved, more concisely and professionally presented and should be considered a definite improvement over its first iteration. While Automata might be considered powerful, I can see them now working in settings beyond Rhûne, though primarily ones that already put powerful races in player hands, a tendency that conveniently is supported by the (imho) not particularly balanced Advanced Race Guide. That being said, while personally, I wouldn’t enter them into a non-Rhûne-game I’d run, though I’m VERY conservative when it comes to race-power-levels. All the improvements, though, now mean that the race actually works and depending on your power-level tolerance, might be fun for you and a valid take on the construct-race. For you, this may be a 4 star-file, while for conservatives/low or rare magic DMs, this should be considered a 3 star-file. My final verdict will fall in-between, at 3.5 stars, rounding up due to the stellar artworks and the low price.

Automata: Guide to the Awakened is available from: