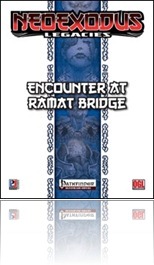 The first module for NeoExodus since the FREE-RPG-Day module “Undying Legacy of the First Ones” is 26 pages long, 1 page front cover, 1 page SRD, 2 pages mini-monster sheets, 1 page combat & initiative tracker, 3 pages of daily spell-list sheets and 1 page of buff sheets, leaving us with 16 pages of content for the module, so let’s check this out!

All right, still here? The PCs are hired by an agent of the Imperial Alliance to venture forth into the border area between the Arman Protectorate and the Janus Horde, where trouble and possibly even war, is brewing. The PCs are sent out to check out a fort situated at Ramat Bridge after being briefed in the back of a seedy tavern. The module provides short letters to draw them into the module as well as a sketchy overlook of the fort of Ramat bridge, which lies on an island. After navigating/avoiding/talking themselves past a force of the Arman Protectorate and a possible ambush, the PCs pass by an occupied town to find that Ramat Bridge’s fort now lies in ruins, the nearby horde-town pillaged, churches of the Sanguine Covenant burned – a lot of mood is set here. It should be noted that for ease of playing this in a limited time-frame, optional encounters are marked as (soft), should you be in need of haste. The fort itself, provided the PCs manage to avoid the potentially collapsing bridge and the subsequent, deadly plunge, seems to be in just as bad a shape – all the more impressive when taking the Protectorate’s mechanical servants into account. Booby trapped bodies, slain guardsmen and P’Tan as well as a mysterious merchant-survivor should arouse the player’s suspicions when investigating the slaughter.

And indeed, nightfall brings terror to the PC’s door, with waves of P’tan and Scythians attacking upon wave – hopefully the PCs have used the provided map (resembling dundjinni in style – ok, but not too glorious) and made some preparations – otherwise, the battles will be a test of endurance. In the morning, a mysterious villain shows and can be seen as an exercise in foreshadowing that should prove to be interesting for the sequel if the DM manages to pull it off. Speaking of sequel – should the player characters survive, they may rapport to a high-ranking military officer and bear witness to an act that may very well mean war… but that are stories for future NeoExodus modules.

The pdf also features 3 feats used by the adversaries herein as well as two spells that are rather interesting: Minion mark and dispel minions, the latter of which destroys the remains of all dead marked with a minion mark – a nice component to explain the complex designs by which the First Ones managed to avoid detection of their schemes.

Editing and formatting could have been better and drag somewhat down what would otherwise be a neat, simple module – glitches à la “Mobile cannon cannot be looted for parts and have no value.”[sic!] are unfortunately to be found more than once in the module. Layout adheres to LPJr Design’s full-colour old (non-parchment-look) NeoExodus-standard and the artworks in full-colour are neat, though you will recognize them from other NeoExodus publications. The pdf has no bookmarks, which is by this time a no-go and a definite down-point of the module. Any pdf longer than 4 pages should come with bookmarks by this point.

Author J.P. Chapleau is one of the lead creative minds behind the NeoExodus setting and it shows – he has a firm grasp on the concepts and mood evoked by the campaign setting and manages to transport this feeling to the module. However, not always. The quality of the writing fluctuates rather strangely between compelling reads and accumulations of short sentences that lack conjunctions, prepositions etc. I’m not sure why these subject-verb-object-sentences crop up, but they do. Wording-wise, another component of my gripes vs. the writing are sentences that contain word-proximities derived from the same root à la “support their supporters”[sic!] instead of “support their allies”. While per se minor points, they conspire with the subpar editing to drag down what would otherwise be a nice, short, action-packed module. The potential repercussions and sense of gravitas the PCs should have by the end of this module is definitely something I’m missing from many of the PFS-modules.

Speaking of organized play – This is something I’m not getting at the moment: The module is an organized play scenario for NeoExodus, which is cool. It also has the (soft) encounter markings, which is a bonus. BUT: As per the writing of this review, I couldn’t find out how the module would work in an organized play context – factions? Faction prestige? Faction Quests? PC limitations? Notably absent. The Organized Play-pdf mentions patrons and tasks/favours for them, but none are available in this book- there also in no LR-sheet for the scenario included.

As a short module, the encounter at Ramat Bridge does its job rather well, but the aforementioned glitches and lack of bookmarks drag down what would usually be a good module to just a solid one. Add the decreased usability in an organized play context (as which this was advertised) and we have another downer. Thus, I’ll settle for a final verdict of 2.5 stars, rounded still (albeit by only a slight margin!) up to 3 for the purpose of this platform since the general flair and atmosphere don’t deserve a 2-star rating.

NeoExodus Legacies: Encounter at Ramat Bridge is available from: