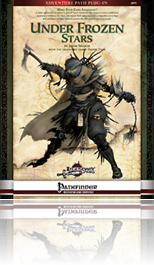 This plug-in to the Jade Regent AP is, as a short glimpse at the page-count shows, not only longer than the modules for Carrion Crown, it also is rather interesting. Anyone halfway versed in Sword & Sorcery literature knows about the concept of Hyperborean cultures – far-developed cultures located in remote regions, often worshipping strange deities and/or having access to magic powers/futuristic technologies far beyond the capabilities of the rest of the world. Well, this pdf sees the caravan stumble across exactly such a locale and offers some respite from managing the caravan.

From the very first glances, we realize that this area might be bad news – strange blue metal speaks tales of a weird city hidden at the top of the world and once the PCs start exploring the tunnels leading into the isolated city – betwixt amid strange machinery, blue metal and strange tubes, the PCs will have to fight for their lives against degenerate morlocks feeding off force magic and their effects as well as brave the strange clockwork sentinels, only to emerge in the outskirts of the cyclopean city from the bunker and come out of the refrigerator and into the freezer: If strange moon flowers, force morlocks and similar strange beings aren’t strange enough, there also is a mayor complication at hand:

A thief named Miriya, legendary acquirer of the white peacock crown, has escaped to this forsaken place to evade her eternal pursuers, a troupe of Oni honour-bound to reclaim the artefact. To make matters of exploration more complicated, the last survivor of the oni-hunting party has impersonated Miriya and seeks to trick the adventurers into doing his dirty work by serving them with a clever lie: Miriya is not the woman she once was, having been changed by a strange machinery found in the ruins into an immortal lifespark construct and thus also commander of some of the strange clockwork beings. Still free-willed and at the same time less and more than human, the ninja could make for a deadly adversary of a valuable ally – while unable to accompany the PCs or damage the origin of the weird constructs, her knowledge of the ruins could help them. If they see through the oni’s bluff and have no problem trusting a thief that has been turned into a strange eldritch cyborg-like machine.

The showdown in the manufactory that changed Miriya is mind-boggling – fighting the now fast-zombified other onis while navigating conveyor-belts is a challenge the PCs will long talk about – especially with the Cyborg processor as a boss – mechanically an advanced musk-creeper with construct traits, the machinery is perhaps one of the coolest reskins/redesigns I’ve seen of a creature in quite some time. Have I mentioned all the traps that the clockwork servants can spring on the PCs or the fact that the peacock crown, the price for all these perils, can be enhanced by replacing its gems?

Or the fact that the PCs have multiple chances to harvest the strange artifacts for resources for their caravan? Or the epilogue, which explains how to deal with the potential loose ends thsi module leaves us with?

Editing and formatting are top-notch, I didn’t notice any glitches apart from one superfluous “the adventure path”-sentence fragment at the end of a sentence. Layout adheres to Legendary Games’ 2-column landscape standard in full colour and the pdf is available as a portrait version as well, though I haven’t got that one. The pdf comes in two versions, with one omitting the background and both come fully bookmarked. The artworks by Tim Kings-Lynne are stellar and up to Paizo-standard, even surpassing several of Paizo’s artworks and Timothy Wickham’s cartography is on par with legends like Jonathan Roberts in beauty and iconicity. It should be noted that there are a LOT of these drop-dead gorgeous maps and artworks herein, lavishly illustrating the pdf and covering each and every locale and even providing an awesome vista of the city, an artwork of the crown and the final fight area. What jars me, though, is the fact that there’s no way to eliminate letters and numbers from the maps to make them truly player-friendly and workable as a handout.

The module herein is, let me spell it out, AWESOME. Dripping iconicity, you can make the sci-fi elements as pronounced or as downplayed as you wish – whether it be eldritch machinery, a link to the Dark Tapestry: The customization options are extremely varied and the locale ranks among the most iconic I’ve seen in any PFRPG-module, making me sincerely regret that exploration of the ruins is not a full-blown 100+pages mega-module. The links with Jade Regent are there, though not so pronounced as to make this only a viable purchase for Jade Regent-DMs. In fact, I whole-heartedly recommend this pdf for any DM seeking for a truly distinct side-trek that can be truly considered INSPIRATIONAL. Ambitious. Beautiful. All of that and so much more. This is one of the hands down best short modules released for PFRPG and even amps up the quality when compared to Legendary Games’ offerings so far. My final verdict will thus clock in at 5 stars, but I’ll omit my seal of approval due to the lack of player-friendly versions of the map. I really hope we’ll get either a layered version of the maps (so we can turn of the numbers and letters ourselves) or separate versions, since this is the only blemish of a product that is in any other regard…well, Legendary.

Under Frozen Stars is available from: