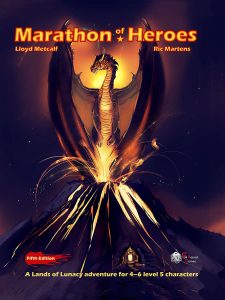 This adventure clocks in at 36 pages of content, sans front cover, editorial, etc. My review of the module is based on the softcover; I don’t own the pdf and thus can’t comment on its virtues or lack thereof.

This review was requested by one of my patreon supporters, who sent me the print version, to be undertaken at my convenience.

This is an adventure for 4-6 5th level characters, and it makes use of the concepts presented in the Lands of Lunacy Campaign Guide. The supplement includes a character sheet, but it should be noted that the skills and the lines to write them down aren’t properly aligned.

Okay, here a word of warning: I am starting with a dissection of the formal criteria – please do read the entire review.

The supplement introduces a new playable race, the Murine, which are mouse-like natives of the Lands of Lunacy, who receive +2 to their Dexterity, optionally, subject to GM discreation a “penalty of -1 STR”, are Small (size not properly formatted) and have a speed of 30 feet. Murine have a nonstandard darkvision range of 40 ft. Proficiency in “perception” and advantage on it as well. They only need 4 hours of sleep and get +2 to Stealth checks, which struck me as odd. They also get +1 to all “climbing rolls” and are proficient in Athletics. They are immune to the effects of the Lands of Lunacy -. Okay, does this include the drexol’s drain? No idea. The write-up is littered with formatting discrepancies, and quite a few rules-components look more like a 3.X or PFRPG-race than like one for 5e.

While we’re on the subject of formal issues, let me get that out of the way right now: The statblocks and their presentation are more in line with 5e’s standards than the ill-fated Lands of Lunacy 5e-conversion; they also, alas, sport a lot of errors regarding, but not limited to, lightning damage being called electrical, incorrect attack values, incorrect HD, incorrect damage values, serious deviations from formatting conventions and rules-syntax, incorrect proficiency bonus values, incorrect saving throw values, “ft.” missing, nonsensical/unusable grapple notes, missing and/or incorrect formatting, etc. Alas, this aspect not only haunts the statblocks in the back, but also severely impedes the functionality of the adventure. 3 magic items are included, and they feel more like items from the 3.0 days. Yep, 3.0 – why? Because 3.X and PFRPG tend to do more interesting things with magic items.

All right, only GMs around? Great! So, the great dragon Vatrastrom must be stopped – thus, the PCs are hired to do just that. They set sail towards isles and are beset by Cephalugia, strange octopus beings, and giant electric eels – which is per se cool, but with the issues in the rules language + the lack of a map for the ship, the combat falls flat.

On the mist-shrouded isles, the proper “marathon” begins – there is this stone-circle with 5 stones – touching one transports the PCs to the respective “test.” There is a fighter’s section, one devoted to clerics, one devoted to wizards and one devoted to “thieves” – that should probably be rogues…

Anyhow, each of these tests sports a serious of tasks that actually are really creative and far-out, as befitting of the Lands of Lunacy. In the fighter’s challenge, we for example have a scene where a berserking kobold attacks – if it’s slain, it spawns two new ones! This would be interesting, were it not so simple to, you know, not kill in 5e. There is a warrior that can’t be hurt by anything outside of a salt circle. There is a giant (stats not included) and the means to contract a disease that clearly fails to grasp how 5e’s exhaustion mechanics work, and in the end, a combat with hobgoblins to save a damsel – who turns out to be a friendly medusa, who can revert petrification. Okay, what happens with her? I *assume* that she might accompany the PCs, but I’m not sure.

The cleric’s challenge doesn’t work particularly well RAW: The global effects are even more messy than that of the fighter’s challenge (which btw. entail penalties to spell damage dice and healing dice – including HD? If so, why? Also: 20% spell failure chance…more 3.Xish aesthetics); here, we operate with reductions of HP, and there are basically pyramids in a forested region swarming with undead – these beacons are supposed to keep the horde at bay. Damage can be used to power them, but no indication is provided how close you need to be for the damage to register. The idea here is pretty awesome, and I really like it, but its implementation is so confused, I basically had to guess the author’s intentions regarding how the whole thing was supposed to work within the confines of 5e’s rules. The supplement also denotes here things that should clearly be a saving throw as a check instead, etc. – in short: Not operational.

The wizard’s challenge, in contrast, while flawed as well, does work better – because it doesn’t try to do anything too fancy. Still, credit where credit is due – a magic carpet ride with aerial combat? Cool! The rogue’s test similarly has a rather neat angle – it’s basically a flight from  a frickin’ Clay golem through a vast canyon, Apart from damage types not codified, the whole section doesn’t really account for how much the discrepancies in speed actually matter – while it could be excused as handwaving (“The golem is just behind you…”) in an odd decision, it’s not the rogue’s forte that tracks escape speed, but rather, correctly, Athletics. Making the canyon, you know, actually challenge roguish skillsets would have made sense there. Plus, it’s very much possible to do the math and calculate obstacles that would require e.g. being 1 minute in advance of the golem and maintain the excitement of the scenario. Ultimately, this is a great idea that has been implemented in a borderline broken manner. Traps are incorrectly presented regarding formal criteria, damage types, etc.. Again, non-functional.

Oh and here’s the thing: RAW, each of the challenges is supposed to grant the PCs some sort of advantage, but in the end, none of them truly matter. They can all be skipped and don’t influence the finale at all. The PCs can theoretically, as written, skip to the dragon by just touching its rock, which brings them directly to the climax of the module. In the beginning the adventure notes that there are supposed to be benefits for completing the challenges, but apart from a few minor magic items that can help a bit (which include stars like an improperly formatted scroll of fire bolt…a frickin’ CANTRIP-scroll….), the ultimate joke of this module is that there is no reason to actually finish the entire adventure. NONE. Aforementioned medusa? She just fades into the background. Oh, and the big bad dragon? No legendary actions, no lair actions, no strategy – it’s just a fire-spewing lizard that waits at the end of lava tunnels. Also: “a character with a weakness to heat (whatever that’s supposed to mean) risks being “exhausted” until leaving the tunnels. This displays a blatant disregard and lack of knowledge of how this works. Having a barbed DEVIL guard two succubi also showcases a lack of understanding regarding planar cosmology. *sigh*

And if the PCs triumph and return, murine will ask for the treasure to rebuild stuff – where was the population before? Also: Upon their return to their ship, all but one NPC will be dead – said NPC will try to kill the characters. Okay, I can get behind a good denouement à la “It’s not over yet!” – but guess what? The guy has no stats. NONE. No idea. If he’s supposed to reference default stats, he doesn’t mention as such or have the formatting to indicate it.

Editing and formatting on a formal and rules-language level are a train-wreck. If there’s something to do wrong, this module will do just that. It’s not even consistent in its own errors. Layout adheres to a two-column b/w-standard, with Lloyd Metcalf’s amazing artworks being the one good thing about this adventure apart from its ideas. Cartography is b/w and ranged from “okay” to “it exists”; no player-friendly versions are included. As noted before, the character sheet has issues. I can’t comment on the electronic version.

This is heart-breaking to me, it really is. I genuinely like the Lands of Lunacy; I also genuinely enjoy the ideas behind many encounters, and this module has heart; it’s not phoned in, it’s not bland, and the ideas underlying every little aspect of Lloyd Metcalf’s and Ric Marten’s  “Marathon of Heroes” are genuinely cool. They deserved better.

It is painfully evident that, from rules-language to basic formatting and balancing to everything else, the authors had no idea how 5e operates; it’s what I’ve come to call the “old-school-trap”; 5e looks, in many ways, like an old-school system, when it really, really is not. Sure you can ignore a ton of the rules and play a handwaving pseudo-old-school game with it, but then you’re ignoring 90% of the rules of the system – and you’re not designing for the system, but for your homebrew hacked version. This is evident here. This has obviously been written (I will not demean the term “design” by using it in this context) by well-meaning and creative individuals that don’t play the game, or if they do, they choose to ignore even the most basic first-readthrough evident conventions of the system that you can think of. There is no understanding regarding the aesthetics, the math or the functionality of 5e beyond a most cursory familiarity here, resulting in a weird mishmash of old-school and 3.X-y rules grafted onto a rules-chassis without an understanding why that doesn’t work. AT ALL.

From the statblocks to the traps to components that are frankly required to run the adventure properly, this only works if you are exceedingly tolerant of a nigh-constant and blatant disregard for crucial components of the game system, if you’re willing to handwave almost every mechanical component anyways. This is the most broken attempt to write a module for a system that I’ve seen in quite a while, with rules-issues bleeding into the very fabric of the plot, requiring copious amounts of GM calls to make this work as intended, even if you are willing to ignore the HUGE amount of formal glitches, formatting deviations and other issues.

It is horrible, really, and one of the instances where I genuinely would love to state that this has saving graces beyond art and ideas, but it really doesn’t. I try hard to stay positive, particularly when it comes to per se good ideas, but the issues here are so darn pronounced, I can’t justify rounding up from my final verdict of 1.5 stars.

You can get the print copy here on Fail Squad Games’ shop.