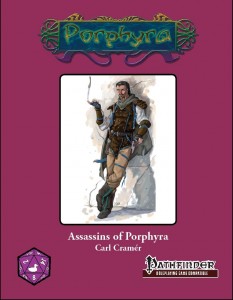 We begin this supplement with something I did not expect to see in here: A surprisingly well-crafted array of small introductions to assassin-traditions -from the Clockwork Society to the Rajuki Sancers and the Fire Splinters, the traditions provided deliver a captivating glimpse at the unique societies of Porphyra and should provide inspiration enough for a capable DM to further develop these tidbits into full-blown societies.

The Assassin as crafted here must be non-good, receives a good ref-save and 3/4 BAB-progression, d8, proficiency with crossbows, blowguns, daggers, darts, rapiers, short bows, saps, short swords and shields and receive a massive 8+ Int skills per level. They also receive sneak attack, progressing up to +10d6. Second level nets poison use and 3rd and every 3 levels thereafter increase the bonus thus granted by +1, up to a maximum of +6. Poison mastery is gained at 16th level.

Now very interesting would be quiet death – if an assassin kills a creature during the surprise round, he can make a Stealth check versus all relevant, present Perception-checks to prevent the other targets from noticing the kill. This ability, gained SOON, is pretty much one of the components that have been missing from the assassin-concept all along. Kudos! Death attack is gained at 4th level, with 12th level reducing the study-time down to 1 round, and 4th level also provides uncanny dodge, which thankfully scales with the ability gained from other classes; at 8th level, the improved version of the latter is gained.

8th level nets a pretty interesting option, namely lingering death, which does not prevent resurrection or the like – nope, it works and then kills the creature again – sans save. Yes, this is gleefully sadistic and yes, the ability has a means of being avoided. The class also receives a dual capstone – for once, souls slain must succeed a will-save to return; otherwise, a planar quest is required. Secondly, all sneak attacks become death attacks. Now, as you may have noticed, this chassis is pretty much a more streamlined version of the Prestige Archetype for the assassin – yes, you would be right, however, I have purposefully omitted the defining characteristic of this whole class: Assassin Secrets.

Essentially, these can be likened to a kind of bloodline-like tradition of killing styles. Each secret is associated with a modified list of class skills and provides a linear progression of thematically-fitting tricks, with arcane and divine spellcasting (magus/inqui-lists) of up to 4th level being the exception to this rule, as spellcasting’s high flexibility obviously did not require more power in this regard. Assassin secrets are pretty much exactly what I wanted – a modular way to easily customize an assassin that puts player-agenda high on the priority list. Oh, and know what? They’re pretty much awesome. Death Slayers? Can use death attacks and poisons versus undead, get ghost touch and can bypass DR and even immunities…oh, and the class can copy means of escape. Damn cool! Now you’re probably familiar with the origin of the assassin-word, which may derive from Arabic Hashshashin – may? Yup, for, as any cultural scientist worth half his salt would tell you, the implied literal meaning of “hashish-consumers” may have been something ultimately brought about by a serious misunderstanding in translation – still, the imagery of Hassan-I-Sabbah’s iconic order has become a staple in our collective consciousness and as such, the inclusion of assassins who not only use a drug, but derive some powerful means of coercion via its application. Yes, this can be considered the enchantment-style assassin.

Would you prefer something more far-out? What about the dusk assassins, trained in the shadow of Morah’Silvanath, looking to finally take down the great tree and reclaim their holdings? What’s odd about them? They acquire a symbiotic fungus (!!) and can breathe spores. Oh, and they can eat poison to make the spores poisonous. This is awesome imagery right here and had me grinning from ear to ear. Prefer psychos who make a spectacle out of killing? Covered. Elemental assassins? Covered. Glass (!!!)-using assassins? Yup, in here. Soul-binding, anti-resurrection assassin (akin to the vanilla PA: Assassin)? Yup, here. Shadow-stepping master of stealth, including shadow pool and silent images – covered. Prefer rogue talents for a more diverse skill-set? Possible. Two feats allow you to make glass as durable as the materials it mimics (which is a damn cool flavor-feat) and to wilder among other secrets – HOWEVER, not in spellcasting. This feat in itself is a beauty in its perfect alignment of prereq skills and level-relevant secret gained – very elegant and smooth scaling.

The pdf comes with favored class options for the core-races – but does not stop here. We also receive new skill-uses, some of which have been a staple in my game for years: Salvaging poison from creatures via concise and well-written rules? Yes. Crafting glass-weapons? Nice. Using Heal to torture? Nasty – and makes sense. Finally, hiding spellcasting via Sleight of Hand is an interesting option, with concise mechanics, yes, but I have ran with a similar solution for quite a while and since skills scale pretty easily, I think the DC is too low; personally, I have added a concentration-check to stealthy spellcasting. I’m torn on this one – it may work perfectly for you, or it may end up utterly OP when combined with invisibility et al. – so be aware of this option’s significant impact on your campaign.

The pdf closes with a level 1 sample character, whose statblock is missing the class + level-line.

Editing and formatting, while not perfect, are very good – I noticed nothing beyond the nitpick level on both formal and rules-language levels. Layout adheres to Purple Duck Games’ printer-friendly two-column standard. The pdf comes fully bookmarked for your convenience.

Okay, let me ramble a bit: My last main-campaign spanned 7 years and utilized no less than 3 base classes and 5 different PrCs to depict different assassin-traditions. Against a backdrop of conflict between the two dominant religions of the setting, I wove a tapestry of shadow wars. I am pretty much familiar with a significant array of assassin-class builds and takes on the concept. If I had Carl Cramér’s Porphyran Assassin back then, things would have been so much simpler: Just add more traditions and there you go! Highly modular, with ample options for customization, a solid framework and player-agenda high on the priority-list, this pdf constitutes the single best take on the concept I’ve read so far and will replace all those options in my home-game.

This is the best “…of Porphyra”-class book released so far and the, hands down, best design Carl Cramér has pulled off so far. This inexpensive pdf is simply fun and delivers ample awesomeness for a more than fair price and makes me hope for more chances for the author to tinker with concepts beyond prestige archetype-complexity. I absolutely adore this pdf and its iconic imagery – whether you want the odd, the fantastical or the gritty low-fantasy iteration of the assassin, this delivers. My final verdict will clock in at 5 stars + seal of approval – absolutely awesome and at the low price-point, a must-buy-category-pdf!

You can get this AWESOME take on the assassin here on OBS and here on d20pfsrd.com’s shop!