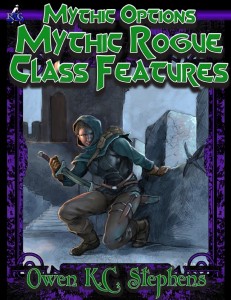 After a short introduction, written in neat prose, we are introduced to mythic class features for the rogue, 6 to be specific. These work as either a 1st tier universal path ability or can be taken in lieu of a mythic feat. You need to have the non-mythic variant of such a class feature in order to take its mythic equivalent. Got that? All right!  So what do we get here? Mythic evasion allows you to expend one use of mythic power to halve damage you receive – ANY damage you receive, but not further ongoing damaging effects. In direct comparison, mythic improved uncanny dodge, which adds half your mythic tier to your rogue levels for being able to be flanked purposes, pales. Mythic Sneak Attack allows you to automatically deal sneak attack damage to non-mythic creatures with each first attack in a given round. You may also extend one use of mythic power to apply sneak attack to a creature usually immune to sneak attack. Where I’m slightly confused here would be – does that mean the rogue could expend one use of mythic power to deal sneak attack to a foe when directly (i.e. non-flanking) attacking a mythic foe? What about mythic creatures usually immune to sneak attack? Some kind of clarification would be in order to make the ability work as precisely as it ought to. Searching as swift action, trapfinding aura… generally, I enjoy the ideas here.

We also are introduced to 15 mythic rogue talents  -via mythic combat trick, rogues can easier meet feat prerequisites by adding mythic tier to prerequisite fighter levels for feats Better fast stealth, more bleed damage, dex-mod to damage instead of str-mod, treat narrow surfaces as regular terrain and disable traps VERY fast etc.  Have I mentioned the option to deprive foes of AoOs for multiple rounds and even slow those hit by sneak attack? Free standing up for the rogue and adjacent allies also makes for a cool option. We also get 8 mythic advanced rogue talents that include better crippling strikes. Rather cool – +1/2 mythic tier to defensive roll-saves or 2 mythic power uses to use defensive roll in spite of having already used it. Extending dispelling attack to any spell on the target is also a rather fine option to have. However, one particularly irksome glitch has crawled in – the Mythic Opportunist advanced talent confuses opportunist and opportunity, making for an at first glance rather confusing read. On another note, Mythic Skill Mastery is decidedly LAME – when taking 10 with a skill the rogue has skill mastery for, they add their tier. Yawn? Mythic slippery mind is better – it lets you continue to try to slip from enchantments, albeit at increasing DCs.

Editing and formatting are good, though not perfect. I noticed a minor glitch here and there, though nothing too serious. Layout adheres to RGG’s printer-friendly 2-column standard and the artworks are thematically fitting stock. The pdf comes fully bookmarked for your convenience- commendable at such a small size!

Owen K.C. Stephens knows his crunch damn well and it reflects in here. A quick glimpse at mythic evasion would probably send a lot of people up the walls – but keep in mind – we’re talking rogues here. Not exactly the most powerful class and especially in Mythic Adventures, a class that can use some amped up potential. So yeah, I do consider this a necessary, nice power-boost for mythic rogues, one that makes them more fun to use. However, balance between the respective abilities feels a bit off (mythic evasion and sneak attack vastly outclassing the other class features, for example  -the others could have used a slight power upgrade), and some abilities herein could benefit from a bit of clarification and a slightly tighter wording. This does not make this damn fine little pdf bad, mind you, but it is enough to prevent it from reaching the very highest echelons. My final verdict will clock in at 4 stars – a good, almost required upgrade for the mythic rogue.

You can get this fine supplement here on OBS and here on d20pfsrd.com’s shop.