EZG reviews The Maestro Base Class

The Maestro Base Class 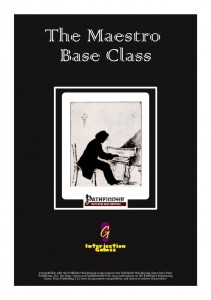 The Maestro-class gets 1/2 BAB-progression, good will-saves, d6, 4+Int skills per level, proficiency with simple weapons and shields (but not tower shields), but not any kind of armor. They also ignore the arcane spell failure chance of said shields. From this, one would presume a full caster class – the notion of which a quick glance at the table dispels: The class starts with maximum spell level 0 and only gets 1st level spells on 3rd level. Yes. Weird. But we’ve come to expect that from Interjection Games by now, haven’t we? So let’s see what this class has to offset that.

Let’s start with the spells, shall we? Maestro-spells ALWAYS have a somatic component and are cast spontaneously via cha. Spellcasting is completely different from any other class – a maestro can cast every spell s/he knows once per day – no more often, no less. They also don’t get bonus spells per day, but rather use this value to determine bonus spells KNOWN. They also are limited by not ever being capable of using any type of metamagic, whether by feats, class features or items.

So what about those compositions? Let’s start with scores. A Maestro starts the game with 2 scores plus 1/3 int-mod, rounded down, min one score. These consist of an intro, a melody and an outro – at least from the beginning. As mentioned, later levels allow for more melodies to be added to the respective compositions. To prepare a score, the Maestro requires an int-score of 12+amount of melodies used and the DC clocks in at 10+1/2 class level + int-mod. If a maestro’s int-mod is higher than his cha-mod, he may use that modifier to supplement his/her perform skill instead of cha.

How does the Maestro cast, then? An individual score can be maintained for Perform (conducting) skill ranks + Int-mod rounds per day. Starting a composition is a standard action that provokes AoOs and it then can be maintained as a free action. The intro-effect of said composition begins immediately upon starting conducting, as do all melody effects associated with the performance. Now a maestro can either opt to end a performance as a free action – however, there is another option. By spending a standard action that provokes AoOs, the maestro can instead end the performance with the outro-effect chosen for the composition, which is immediately triggered upon completing the finishing flourish. While conducting cannot be interrupted in the most common ways, killing the maestro or incapacitating the character via paralysis etc. also ends the composition. Only one composition can be in effect per Maestro. Now refrains can be used to further spontaneously modify the compositions – by spending a move action, the maestro can use a refrain for one round, suspending the regular melody benefits of the composition (though the times still counts against the total time limit), while intro/outro remain unchanged.

12 intros, 13 outros and 2 that can act as either provide the basic framework for the melodies, of which we get no less than 40 (unless I’ve miscounted). Each has certain prerequisites, which can range from none to requiring e.g. spell focus (enchantment) to certain skill ranks and minimum levels. It should be noted that, though one composition requires leadership as a prerequisite, there is an alternate prerequisite for campaigns where that feat is banned. Compositions are considered supernatural abilities unless they contain one component that is a spell-like ability, in which case they count as the latter. Finally, it should be noted that, provided the requirements are met level-wise, most melodies stack with themselves – this way, e.g. the buff to wreathe the Maestro’s weaponry in +1d3 fire damage-dealing flames could be stacked with itself, as could the save-enhancing blare within 30 ft. against sonic descriptor-spells and verbal-component dependant bardic performances.

Now if that doesn’t look that impressive so far, remember that that’s just one of the components – take for example the accelerando-intro, which nets you and all allies within 30 feet +5 ft. movement to their base land speed, + an additional 5 ft. is added every round after that capping at +5 ft. for every two maestro levels. Nice way to create a rules-representation of the rising speed – and it should be noted that the bonus is untyped, thus allowing synergy with your spellcasters…one thing to keep in mind when running from the errupting/volcaano/collapsing dungeon/avalanche next time your PCs are in a shuffle…

Now if you instead want to use perform to gain money, you can also do so with an outro that allows you to instead add the remaining rounds as a bonus to increase the check to earn a living via perform in downtime activities – nice synergy with the underused downtime rules there! Another intro generates a continuous aura of indiscriminate sonic damage around the maestro. What also makes this interesting is the interactivity between the components of compositions – via the melody Deceptive Cadence, the outro-DC is increased by +1 per times the melody is chosen. Or take the outro encore: Requiring 13th level, its effects only work after conducting a composition for 5 rounds or more, but after that, the outro allows you to restart the composition with a bonus of +1d4 rounds that do not count against the composition’s daily limit.

The End with a Whimper outro also deserves special mention – a target creature within 30 feet of the maestro must save or die, provided it had less HD than the Maestro and listened to the composition for at least 3 uninterrupted rounds. EDIT: Interjection Games has fixed a minor issue here in record speed. One thing to bear in mind: The outro requires 15 ranks in heal and a maestro level of 13, which means that a maestro can only take this outro at 15th level, try as he might. It should be noted that I assumed a Skill-prereq-relic here, but Bradley Crouch has explained on my site that this is actually intentional, to reward multiclassing. This also extends Elegy for the Living with its prereqs of level 3 and 6 ranks.

Another melody allows maestros to cancel out morale bonuses from just about any source – which should make evil parties with e.g. antipaladins cackle with glee. Synergies that bolster bardic performances as well as maestro compositions also are within the range of possibilities here. There are also options to use an outro to maintain a refrain for 1 round after the respective composition has ended or until a new composition has started.

Via Klangfarbenmelodie, the Maestro can also influence foes that have already successfully saved against a melody, thus being rendered immune against it to require a new, second save. Creating a variant air elemental that can deafen targets also is within the distinct realm of possibilities here. There is also an option via an intro that halves the area of effect, but also makes melodies that can be taken multiple times count as if they’ve been taken an additional time without counting these against the melody-limit. Conversely, doubling the effect of melodies via an intro for one round also is possible, as would be the AoO-provoking option to create walls of solid, damaging sound – the latter per se works well, with its prior single nitpick taken care of.

Healing via an outro can also be a nice benefit, as can the melody that allows a down on his luck maestro and his allies to make just about any food more palatable.

Now I’ve mentioned the Opus – where the regular compositions of a maestro are very much customizable, the opus is not (with one exception: Via an intro, aborting a regular composition to start an opus still triggers the outro of the composition) customizable – they are essentially 1/day complete packages of effects. Each Opus can be selected multiple times, adding +1 use per day to said opus. And these offer quite significant benefits – 10th level maestros can resurrect allies at 10th level. Other examples include granting massive physical benefits to one target creature, deal ability damage to ALL scores, a lesser version of irresistible dance… and then there is the option to darken the skies and rain down fiery death or even, yes cannonballs! Yes, bombard adversaries with cannonballs while conducting other melodies (here is an exception to the no-synergy/parallel compositions-rule). Fly speed for multiple allies, sanctuary + SR and calling forth walls of stone – quite a few neat options here. Really cool: Real life masterpieces of classical music, the inspirations for the respective opus-compositions, are provided for each and every one of them, allowing you to get in the mood (or even play the piece at the table!) – awesome!

Now at 20th level, a maestro can choose 1 of 3 capstones – one makes you famous throughout the multiverse (resulting in e.g. demons wanting your autograph) and also making the chosen composition available as a bardic performance to EVERY BARD. A second capstone nets the maestro an infinite amount of royalties for creating a new genre equal to 1d6X 100 GP, while the third option lets the maestro create a new instrument, gain 20 ranks in it and allows the maestro to inspire competence as a bardic performance AND maintain that while also conducting. Very unique, epic and damn cool capstones.

We also get favored class options for the standard races, aasimar, drow, hobgoblin, kobolds, puddlings and tieflings. We also get a spell-list (unfortunately sans denotions where the respective spells can be found – slightly uncomfortable when not allowing laptops at ones table and relying on books, but then again not that bad due to the limited amount of spells available) and also 6 feats to increase the DC of favored scores, +3 compositions, longer durations for favored scores, and +1 round duration for all scores. One feat also allows you to conduct refrain AND melodies at once, but consumes 2 rounds of the composition IN ADDITION to the rounds it already consumes.

Editing and formatting are top-notch, I didn’t notice any true flaws. The pdf comes fully bookmarked for your convenience, though not excessively so. Layout adheres to Interjection Games’ elegant 2-column b/w-standard and the pdf comes with thematically fitting stock art.

The Maestro is an exceedingly awesome class – the base concept of making essentially bardic performances a three-component, highly complex and customizable array of cool unique options is simply great. The amount of tinkering here is mindboggling and the overall playing experience is complex and more intuitive and easier to grasp than any other Interjection Games class I’ve reviewed so far – so either I’m getting just better at analyzing them or author Bradley Crouch has improved his writing further. The options galore reward careful planning while not stifling creativity, making this class a) unique, b) damn cool to play and c) an all-out success.

Now here I had minor complaints, which have all been addressed perfectly. While I’m still not sold 100% on the skill rank/class level prereq-divide, this alone is essentially preference and since there are no other complaints for me to file, my final verdict now clocks in at a triumphant 5 stars + seal of approval! Get this awesome class! Oh…and first candidate for my Top Ten list of 2014.

You can get this awesome base class here on OBS and here on d20pfsrd.com’s shop.