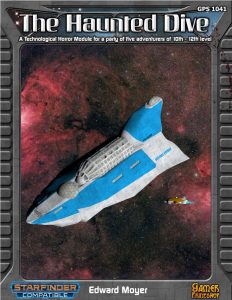 Okay, so first thing you should know, is that this module uses the rules from the Starship, Stations and Salvage Guide. It has a ton of supplemental rules included, but does not reproduce these. It is possible to run the adventure without owning said book, just to make that clear.

The module spends a lot of pages on rules, so let’s take a look at them first:

The supplement comes with 3 new expansion bays, which do focus on a leitmotif of the adventure (see SPOILER-section below) and includes stats for luxury escape pods. This also ties in with the new ship defenses. There is a computer augmentation that clocks in at level 10, which allows the user to add Intelligence bonus to other functions in the ship, which can be pretty excessive. There is a nice, new ship hazard. The pdf also includes equipment rules for back packs that allow for battery combination, which is per se cool – and yes, it may be rigged to detonate. There also is an odd one: Emergency Survival Boosters ”Adds an additional tier of level to any clothing or armor that its[sic!] attached to…” – and no, I have no idea what that’s supposed to mean. There is a gauntlet that does not properly denote the damage type it causes, and the generators noted also suffer a bit from wonky verbiage.

There is a cybernetics section that does not properly denote the system into which they’re implanted. There is a lens that grants you infrared vision…which does not exist in SFRPG. One glance at the core manual will show you that infrared sensors translate to darkvision in SFRPG. Low light vision does NOT have a range. There is a section on using VR in conjunction with the Computer rules, but it doesn’t properly codify all of them as per subset of computer features. The new armors are solid, and there are some armor upgrades included.

The pdf contains two variant classes – a VR-based version of the mechanic, and a mystic variant.

…there is no nice way to put it, so here goes: They deviate in a TON of ways from proper presentation and rules-language standards. It begins by the tables being internally inconsistent (one class lists full save names, one abbreviates Fortitude to Fort, but doesn’t abbreviate the others; saves are listed first before the BAB, for maximum confusion…particularly in the second class, which also hasn’t properly aligned columns…) and goes on from there. Even when an ability like bypass provides a clear example to follow, the classes somehow get that wrong and put it in an awkward way. Stamina and Hit Point correlation are dissolved in one instance, which may be a typo. There is so much wrong with these, I frankly don’t know where to start. To give you an excerpt from one of the mystic spells: “This counts as a DR5 vs force and kinetic attacks. This replaces the Major version of Force Shield.“ This is not how DR works. The spells don’t list spell levels in their descriptions spell (you need to default to the list for that!), and this weird “replaces” makes no sense – the old spells are not lost! These classes are trainwrecks and don’t contribute anything of significance to the pdf.

The pdf contains VR-Rules, which list the following: “A Diver begins with a Virtual Hit Point

equal to his base HP. When this reaches 0 they are automatically removed…” Okay, does this include Stamina? If not, why? If it goes directly to HP, there is a whole array of questions left. You have a virtual AC (VAC) of “10 plus their intelligence per level.” No, I am not making that up. If you want to use these rules, you better do some serious fixing first, for RAW, they simply are not operational.

The pdf also includes a new race (see Spoilers) – that is more min maxy than SFRPG races should be, with +4 to an attribute, -4 to another. The race has a fly speed, but doesn’t denote maneuverability or type of fly speed, and labors under the misconception that there is a blanket energy resistance as a rules term. There is not. These glitches tend to also find their way into the bestiary. The presentation of statblocks is not unified, and the critters presented are off in pretty much every conceivable way. Effects that should be noted as critical aren’t, type is off, damage values are pitiful. Damage types are not noted correctly. Skills are off. Plusses are missing. Formatting is wrong. A CR 20 critter is noted as 6000 XP. Statblocks are oddly aligned in some instances. To give you an idea:

“Init +3 Senses Low-Light Vision as per

The bestiary section is a bit better…but the NPC section and the new race and related statblocks? Oh boy. Also: There are plenty of lines that read “Will Immune” That is not correct. The section has some guidelines regarding VR creatures and haunts, which is per se cool, but is also contingent on the VR-rules. Which are not operational. And I haven’t even touched upon the fact that formatting is wrong and inconsistent. Skills are not properly capitalized, rules-language is off, things that shouldn’t be capitalized, are…the list goes on.

Okay, that was not what I was hoping for.

Let’s see how the adventure section holds up, shall we? It should be noted that the module does contain proper and player-friendly maps of the vessel, as well as a long section of introductory prose and notable questions that PCs may ask – as far as that aspect is concerned, the adventure presents a neat level of guidance for the GM. The following contains SPOILERS. Potential player should jump ahead to the conclusion.

So, as the introduction noted, the inspiration for this adventure was “Ghost Ship” – and while I’d argue that the movie is not an efficient horror movie, I do concur with the statement that the Final Destination-ish mass death scene was indeed well-executed. It also does something interesting, in that it features two distinct tags for descriptions: “Before” and “After”, which means you could conceivably play the adventure as things are happening, or as explorers that happen upon the vessel after the disaster. Another option would be to play its “Before” state with one-shot characters. So yeah, the set-up reminded me of one of my favorite OSR-adventures (review forthcoming), so that’s a good thing.

The Vestige Voyage, the ship, is properly statted and lists its amenities and the like in a concise manner. A brief table allows for random encounters/creepy things happening. The story, alas, is not presented as clearly. Basically, a technomancer has found a new type of creature, quantum fey. (These also would be the new race mentioned earlier.) That idea is amazing. Alas, the synopsis refers to two different characters as “The technomancer”, which can be confusing. Plot-wise, a queen of the quantum fey was imprisoned and driven mad; when freed, she lashed out, and the dying good technomancer uploaded her mind – now struggling with the mad queen for supremacy, she triumphs, but is cursed with undeath. This happens as a gala is held, much akin to aforementioned movie.

Yep, you’ve probably pieced it together by now: Basically, the module uses holograms and VR to account for haunt-like effects, creatures, etc. The adventure itself is presented in a classic way, in that the pdf describes the locations of the “Vestige Voyage.” There is an overview section for the exploration, presented for the GM. Self-destruction of the vessel is a distinct possibility, just fyi. The information-presentation is rough, though. It helps that “Before” and “After” are bolded in the text, but the other pieces of information need to be puzzled together, and enemies are noted in the text sans highlight or stats. The constant issues in rules-language and presentation further hurt this: “Any Engineering 30 and computer check 30 will override the bridge lockouts.” Even casual familiarity with Starfinder ought to tell you that this is not how the like is worded and formatted.

…and, honestly, it sinks the module. Not on its own, mind you…but in conjunction with the rules that are supposed to provide a unique angle, the rules that don’t work? Yeah. It does.

Editing and formatting are bad on a formal and rules language level. There are copious amounts of typos, and worse, there are a TON of issues in pretty much every aspect of the rules language. Layout adheres to a solid two-column full-color standard, and the maps presented for the vessel are nice and full-color. They are, hands down, the strongest component of this adventure. The pdf comes fully bookmarked for your convenience.

This module was shocking for me. Edward Moyer’s rules language tended to sport some inconsistencies and issues here and there, but this module is a whole new level. Basic things that have been staples since the inception of 3.0, things that I haven’t seen done wrong in a while, are simply not functional. The rules for the VR-gimmick, on which much of the module hinges, simply don’t work.

Gosh, this was frustrating. When reviewing adventures, I tend to focus on the story, on how it plays. I am a bit less picky than when I’m reviewing books intended to primarily serve as crunch resources. Up to a point. Here, the editing (or lack thereof) actually sinks the entire module. The rules are nowhere near operational. As a developer, I’d send this back to the author and tell them to read up on the rules and how they’re formatted, rewrite the entirety, and then get back to me. I looked at the rules, and even casual observation provided so many issues that I frankly didn’t know where to start when complaining about them.

And, you know, usually, I’d try to see this as something like “Okay, rules are bad, but if you look at just the adventure section…” – but that doesn’t work here. This tries to be a highly technical adventure, with a ton of entwined rules, a whole system for VR with its own intricacies – perhaps because the base adventure section is neither creepy, nor particularly original. Some concepts are really cool, but they are mired in the execution, like dinosaurs, conserved in a tar pit. The main issue, though, is that this simply doesn’t work. The adventure is utterly reliant on these new rules, and when they fail to work, so does, by extension, the adventure.

I so wanted to like this. I adore scifi horror. But unlike “Rogue ‘s Run”, you have no chance of ignoring the broken aspects here. There are no two ways around this – this does not work. And this is so frustrating, because the adventure does have a great angle, a great twist on a classic trope. It has creative ideas, but the execution of said ideas is, at best, in a pre-alpha stage. There is potential here, and had this been presented in a tight manner, it could have scored as high as 5 stars + seal of approval. If you invest a LOT of time, you can make this an interesting and creative module, but expect more than a few hours.

But what we get here, alas, comes nowhere close to that. My final verdict can’t exceed 2 stars.