Grave Undertakings: The Tomb of Caragthax the Reaver (Revised Edition) 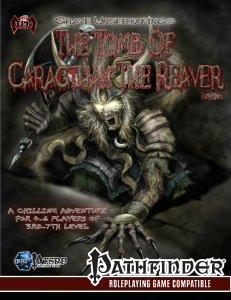 This revised edition of TPK Games first module clocks in at 43 pages of content, one page front cover, 1 page editorial, 1 page SRD, leaving us with 40 pages of content – quite a bunch, so let’s take a look, shall we?

So this is it – the revised version of the one pdf TPK Games had put out I didn’t like – now mind you, the first iteration of this module had an awesome boss battle in a dread cairn – multiple phases etc. – cool, yes. But that was about it. Fast forward to NOW.

Want to know what’s changed? Well. Everything. No, seriously. Let’s start with the maps – superb, line-drawn b/w-maps -all originals. While we don’t get key-less versions to hand out to the players, the maps are sufficiently large to print out. Additionally, the pdf comes with quite an array of seamlessly fitting, glorious b/w-artworks, again, original – so from the get-go, vastly improved production values! It should also be noted, that like the creatures in other recent offerings by TPK Games, you’ll see next to no boring standard adversaries – whether with unique options, class levels added to monsters or the like – just about every foe herein has some interesting peculiarities that should drive home the fact that the PCs aren’t up against a harmless module…not that this one would punch any punches, even in the first encounter we have…

Wait. Sorry, forgot – from here on reign the SPOILERS. Potential players should jump to the conclusion.

All right, still here? Well, I mentioned the cairn the PCs find – via one of several hooks, or a combination thereof, the PCs enter the cairn – and are in for a nasty surprise – crypt thing teleport to ghoul cells. Here’s to hoping your fragile casters are up for the task. This sets the scene – as does the advanced, grisly legless ghast that makes for one of the most shocking adversaries I’ve seen in quite a while. Faint stomachs need not apply! (And yes, said adversary has no less than 3 simple templates applied!)

This was essentially when the original module ended – Caragthax showed up, deadly battle ensued, that’s it. And yes, Caragthax is next on the to-kill list – but something happens – the floor collapses and the PCs plunge down through the collapsing floor into the second level of the module. At page 19 of 43.

Yeah, I wasn’t kidding when I said the module has been revised! The unholy reliquary hidden by the cairn is now the PC’s trap – and in order to escape, they not only have to brave the deadly adversaries within, they also have to contend with the weird effects of the dungeon. These deserve special mentioning: Sleeping is impeded, summoned creatures turn hostile and evil…and worst of all, magical healing is corrupted, potentially dishing out negative levels. Now since my players usually yawn at dungeons as written, this amount of lethality is EXACTLY what gets me DAMN STOKED! It also drives home how nasty the place is and makes it feel wondrous – in a rather delightfully twisted way… Just imagine you cleric realizing his/her healing here makes the flesh of his allies pallid…undead-like. Yeah. Priceless.

Better yet – Dossenuses, doom-laden riddles and prophecies of the reaver reborn set the stage to prepare your PCs for their A-game – which they better bring. There’s e.g. a room, where the door slams shut – and vanishes from the inside, CEASING TO EXIST. Yes, potentially, PCs can be entombed for an eternity, undying (due to the sustaining quality of the dungeon)… Hope they’ve got their mining-equipment or similar tricks up their sleeves. Unforgiving? Yes, but a good dungeon ought to be about using both brains and brawns, the former being more important than the latter. Oh, and PCs drinking from a fountain could see the water turn into an elemental INSIDE THEM. Yeah. OUCH! Mummified gremlins? Yes. What about complex multi-round traps? Hag rangers? Broken Souls? An improved swarm of IRON ROT GRUBS? A smart little riddle that penalizes wrong decisions? Living Walls? The option to recreate a holy blade sworn to defeat Caragthax? An undead belching beheaded skull? Deadly haunts? This dungeon does EVERYTHING RIGHT – including a deadly showdown with the returned and turned unique demon Caragthax!

Editing and formatting are top-notch – I didn’t notice any significant glitches. Layout adheres to a printer-friendly 2-column b/w-standard and the artworks are thematically-fitting and awesome. The pdf comes fully bookmarked for your convenience and both artworks and maps complete an overall A regarding production values, with unobtrusive hyperlinks being the cherry on top.

Well, Brian Berg, PJ Harn and Tom Phillips took one great encounter and made one of the best dungeons crawls I’ve read in quite a while out of it – breathing dread atmosphere, this module is not only glorious regarding the mood, but has something unique going for every room, every encounter. There’s always something unique, something lethal and mechanically interesting around the next corner. Sure, social skill specialists may not have their field day here, but that does not detract from this gloriously difficult dungeon crawl – this now truly deserves being called HARD. This is one of the few modules I could run as is and not have to upgrade everything. So if your players are looking for a challenge (or if you want FGG-level difficulty) or if you want to show off how truly disturbing and dark a dungeon crawl can be, while having a true blast, this is the way to go.

Let me say that loud and clear – the revised edition of this Grave Undertaking deserves its name, is simply awesome and its content makes this an actual steal at the price-point. If you have at least some soft spot for balls to the wall horror, for deadly dungeons, then this is a must-buy purchase. The team of TPK Games deserves my highest accolades for this revised module, which, I hope, will be the standard for all their things to come – 5 stars + seal of approval.

You can get this deadly, superb dungeon crawl here on OBS and here on d20pfsrd.com’s shop!