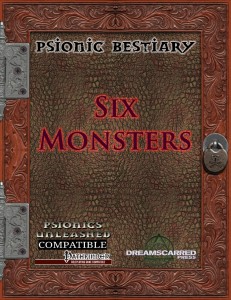 This installment of the Psionic Bestiary-series is 10 pages long, 1 page front cover, 1 page editorial/introduction,1 page SRD, leaving us with 7 pages, so let’s check out those beasts!

The first critter would be the Azrathid at CR 3 – a truly deadly psionic ambush predator with a truly NASTY paralysis-inducing poison – nice, in spite of being sans signature ability: The combination of psi-like abilities makes these work!

Next would be the CR 6 Brain Worm – body horror indeed: These worms try to subdue you and then, burrow into your flesh, wrap around your spine and then extend tendrils into your brain. And yes, you’re essentially dead if the parasite can’t be extracted, gaining the infected host template. A per se cool creature, though I wished it had some intrinsic way of actually making its prey helpless- guess host bodies and pummeling foes into submission will have to do, though bleeding out and no heal-skill to stabilize prey on the side of the worm make assuming new bodies somewhat ineffective.

At CR 5, corpse beetle-swarms may emit a drone that makes flying impossible and if swarms weren’t bad enough, these critters also make you shakened on a failed save…ouch. Oh, and the, much like aforementioned worm, have a connection to a creature called Skull Thrasher (CR 7, btw.) – which is the final part of the life-cycle of this strange being – first a beetle, then a worm, then a skull with an attached spinal cord suffused by tendrils and an otherworldly intellect that can control its lesser brethren – over all, quite a cool creature array and rather disturbing in the fun, mind-flayer-way.

At CR 4, the Ghaar, monstrous-looking, psionic plants are a dying breed – bereft of their racial heart tree, these beings may have necromantic powers, they may be damaged by positive energy and yes, they can hurt themselves to inflict damage upon you – but if you get to know them sans dying, they aren’t so bad…

Finally, at CR 9, there’s the Mathra Tree – think essentially hang-man’s tree psionic cousin and you’ll get what these do – entangling vines, charm-like effect, neurotoxins – nice, if not particularly special.

Editing and formatting are top-notch, I didn’t notice any glitches. Layout adheres to DSP’s background-less two-column full-color standard and each creature herein gets a stunning, awesome piece of original full-color artwork – kudos! The pdf comes sans bookmarks, but doesn’t need any at this length.

Andreas Rönnqvist, Jeremy Smith and Michael Pixton did a neat job here, offering a nice cadre of psionic creatures – I particularly liked the Gathra, surprisingly the Azrathid and the idea behind the 3 monsters connected by the life-cycle, though I’m not 100% wowed by the respective execution of them – there’s nothing particularly wrong with them, but I still feel the worms and skull thrashers could have used some minor fine-tuning/unique tools of the trade. All in all, still a great little bestiary, well worth the fair asking price – final verdict? 4 stars!