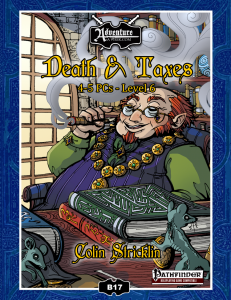 This module is 46 pages long, 1 page front cover, 1 page ToC (plus settlement statblock), 1 page editorial, 1 page advertisement, 1 page SRD and 1 page back cover, leaving us with 40 pages of content, so let’s take a look, shall we?

This being a review of an adventure module, the following contains SPOILERS. Potential players may wish to jump to the conclusion.

Still here? All right! The city of Hordenheim is a dangerous place – situated at crossroads, everything from nasty humanoids to power-mad wizards and pillaging armies makes its way through the area. Maintaining a careful neutrality, the city has been plagued for some time by its often violent guests – oh well, at least the location means the town is profitable – that does account for something, doesn’t it? Pollard Varice, burgomaster of Hordenheim has a shrewd sense of business and made an…interesting move. He appointed known upstanding citizen and practicing necromancer Findle Stirr the high sheriff. Now tax season is approaching and the PCs are hired to act as tax collectors since three particular problems have haunted the besieged burgomaster – first of all, whole neighborhoods are in open revolt. Secondly, counterfeit coins have appeared and thirdly, members of the tax assessor’s guard tend to turn up dead with a disturbing frequency.

In the streets, the PCs will encounter rats here and there as they investigate the thieves guild – which is easy to find…and innocent, at least regarding the recent crimes. In case you don’t want to put the PCs in medias res, an encounter with a necromancer and his zombie guardsmen should also serve as an apt introduction to the uncommon police-force of Hordenheim: Speaking of which – the city comes with a surprising amount of local color – from smoke shops with fine cigars (and potentially pot) to the guild of sweeps, we get some exceedingly awesome ideas here. What is the guild of sweeps you ask? It’s a guild of people who have prods with alchemical salts that use these prods to herd slimes and oozes through the streets, thus cleaning them fast and efficiently. Is that awesome or what? But back to the module – the burgomaster deputizes thus the PCs and sends them off with the obviously xenophobic, nasty necromancer-sheriff to the Trots – a blue color neighborhood, where hard-working centaurs, satyrs and even minotaurs await the PCs – their rebellion can be ended by navigating the urban labyrinth and finding the ringleader – hopefully taking the minotaur alive or using their social skills to convince him to come along. The second task, ending the counterfeit ring, has the PCs interrogate an illiterate mute (have fun!) and then investigate the temple of wealth, where, after some snooping, they’ll find a group of leprechauns – including the high priest, as culprits of the counterfeiting.

The final issue has the sheriff accompany them to the high assessor – a prissy half-orc with an aururumvorax kit as pet. The man’s guard has been decimated at night and hence, guard duty is up next to apprehend the assassin – which turns out to be harder than anticipated. Via red herrings, the help of a pseudo-hag and an uncommon elixir (which should get a range limitation or not be featured beyond the confines of this module), the PCs can track the culprit – which turns out to be the kit#s mother. Whether they return her child or slay the golden-furred creature – the threat is ended. Celebrations are in order!

On the next day, the PCs won’t be paid. The tax-bloated treasury has been cleared. Completely. In order to get paid, the PCs will have to find the thief – the thing is, who or whatever was the culprit, he/she/it is long gone and was careful – no obvious leads. Just as the PCs start to get frustrated, they’ll get a letter from aforementioned Pseudo-hag, who implores them to visit her. Turns out, that the city’s rats have been all but exterminated – they are afraid and have just one bastion left. Hopefully, the PCs smell that something’s fishy here and investigate – that way, they can defend rats against swarms of undead rats. If the rioting populace doesn’t get them first, that is. The swarms of undead rats were created via a ritual that ahs them all point back towards the ritual’s origin and astute players should realize that an army of undead rats makes for excellent thieves – thus explaining the complaints of the poorer folk that the thieves went over quota.

The trail leads to the station house, where deputy necromancer properly park their zombies and similar fun hijinxs ensue as the PCs confront the sheriff, who is smelting the gold into his own golden undead monstrosity, designed to purge the non-human inhabitants of Hordenheim once and for all. Defeating him and his beast ends the module, which btw. also includes the simple gold-leafed template that allows you to fortify undead, constructs and outsiders with gold at CR+1.

Editing and formatting are very good, I didn’t notice any significant glitches. Layout adheres to AaW’s nice 2-column full-color standard and the pdf’s artworks are partially full-color stock and partially original, but fit style-wise well together. The pdf comes fully bookmarked for your convenience and with player-friendly versions of the two full-color maps.

Colin Stricklin weaves a yarn that is thoroughly exciting – slightly tongue in cheek, though never to the extent that it would break immersion, full of fun oddities, local color and great ideas, the city of Hordenheim comes to life in these scarce few pages in an extent that speaks of the author’s mastery in concise writing. Unique characters abound, non-lethal problem-solving, interesting terrain – this reminded me of the best instances of 0onegames’ Great City or Kaer Maga, to the point where I definitely wouldn’t object to a massive, full-blown city sourcebook. Yes, that intriguing. The module’s prime achievement would then be that it manages to cram the city information AND a compelling, sandboxy investigation into its page-count without losing its appeal. This is a glorious module that has me wanting more of Colin Stricklin’s offerings. If you like aforementioned city-settings or have a soft spot for uncommon locales, then don’t let this one slip by.

You can get this damn cool module here on OBS