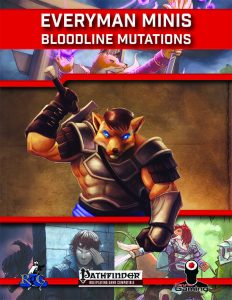 This Everyman Mini clocks in at 5 pages, 1 page front cover, 1 page editorial, 1 page of SRD, leaving us with 2 pages of content.

The supplement begins with an explanation of bloodline mutations: Whenever a sorcerer or bloodrager would receive a bloodline power, they may exchange it for one of the mutations within; alternatively, bloodline feats may be swapped for mutations, though prerequisites must be met either way; minimum levels to take the respective mutation are noted for both classes, accounting for the different usefulness for the respective class. Bloodragers may use blood mutations even if they’re not in bloodrage.

All right, the introduction and explanation on the first page out of the way, let’s take a look at the mutations, a total of 10 of which are provided!

-Blood Bath: Whenever you cast a bloodrager/sorc-spell that deals HP damage and affects an area, creatures failing their save also take +1d4 bleed damage. The limit here is that only Spell Focus’d spells or those hearkening from the bloodline are affected by this potent boost. Still, this is one I wouldn’t allow in all my games. High fantasy? Sure. Lower-powered games? Less sure there.

-Blood Blister: Sickens creatures that fail their save versus sorc/bloodrager spells for Cha-mod rounds. Only applies on Spell Focus’d/bloodline spells, and is correctly codified as a pain effect. The minimum levels here are higher than for Blood Bath, which makes the bloodmutation’s potent benefits easier to digest for me.

-Blood Bond: When targeting allies with a sorc/bloodrager spell, you can choose to forma blood bond with one affected ally.. While such a bond is in place, both beneficiaries of Blood Bond gain the Lookout feat while adjacent, and receive the benefits of status (not properly italicized). Only harmless spells may forge a blood bond, and only one may be in place, with new casts allowing for the superseding of previous casts. Nice one, though 9th/12th minimum level may actually be a tad bit conservative for this one.

-Blood Enmity: Choose a creature type (and subtype, if applicable) from the ranger list. The choice may be determined by your bloodline, targeting opposed creatures, subject to GM’s approval. Creatures targeted by your Spell Focus’d or bloodline spells that fit the criteria are in for a bit more pain: You either get +1 to the spell’s CL, or +5 to caster level or dispel checks made with it. Cool one!

-Blood Feud: +1 to CL with single target spells if you’ve been hit by an attack, spell, SP or SU that wasn’t harmless by the target. To nitpick: This should specify a maximum duration, like “within the last minute” or somesuch. It’s just +1, but from an aesthetic point of view, it’d have been slightly tighter.

-Blood Lust: +2 to atk with sorc/bloodrager spells that need to hit; if you hit, the bonus lasts for Cha-mod rounds, minimum 1. This one is pretty potent, but has high minimum levels and is kept in check by the bonus type.

-Blood Mist: Gain concealment when you cast a bloodrager/sorc spell, courtesy of blood spray. This lasts for Cha-mod rounds. Minor typo: “This you can’t use this concealment to make Stealth checks.”[sic!] Important caveat, though! Still, this one is available from 1st level (for sorcs) and 4th level for bloodragers and represents a rather potent ability sans limits. I’d probably make this one require an action to activate.

-Blood Spray: Add + Cha-mod to the bleed caused by the blood bath mutation. This one is suitably high-level.

-Blood Surge: When you target yourself with a harmless bloodrager/sorc spell, you either get fast movement, or increase its power by +10 ft. for Cha-mod rounds. (Here, no minimum duration is noted.) Cool one!

-Blood Thirst: When you use a bloodrager or sorc-spell with the polymorph descriptor to gain a bite attack, your bite attack increases its damage output as though you were 1 size category larger. This one is a bit odd, as plenty of bloodlines grant bites – this should probably interact with those as well, right?

Editing and formatting are good on a formal and rules-language level, but not as tight as usual for Everyman Gaming. Layout adheres to the two-column full-color standard with the nice artwork-border. The artwork presented is nice, and the pdf has no bookmarks, but needs none at this length.

Matt Morris’ bloodline mutations are a fun little supplement; the concept deserves to be expanded further. That being said, due to the wide variety between bloodline powers and feats, it’s hard to judge whether or not you’d consider the respective options to be balanced. As a whole, a few seem to gravitate to the more potent side of things, often courtesy of having arcana-like effects that apply to many or all spells cast. That being said, this is a nice pdf to check out if you’re looking for some nice options for magical bloodlines, and it does have some really cool visuals. My final verdict will clock in at 3.5 stars, rounded up.