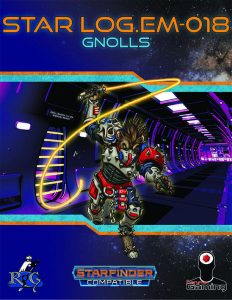 After a brief introduction to the subject matter, we begin with a flavorful series of fluffy bits that serve to contextualize the gnoll race thematically within Starfinder as a rules system, as well as within the implied Xa-Osoro setting shared by Everyman Gaming and Rogue Genius Games. As before in the Star Log.EM-series, the “Playing a XX”-section that notes how you likely behave and how other races view you, is missing here.

Mechanically, gnolls get +2 Str and Con, -2 Cha, 6 hit points, and they are Medium with a 30 ft. speed. They get low-light vision, as well as a +2 racial bonus to saves versus disease, fear and poison. They get unarmed natural weapon, analogue to that of the vesk race. As a unique ability, gnolls can heckle targets. They get Intimidate as a class skill and gain +1 to Intimidate instead f they already have the skill. Gnolls may attempt to demoralize all foes within 30 ft. as a full action.

The pdf also contains 5 feats: Canine Gait allows you to adopt or stand from a 4-limbed movement rate as a move action, for quicker movement. Charging allows for the standing up sans action – the feat now works properly. Clamouring Heckle and Goading Heckle build on the AoE-demoralize, with the first allowing for quicker regular and AoE-demoralize, the latter allowing for the addition of the off-target condition, or the extension of such an effect created by an ally. Finally, Hyena Shape is cool, allowing you to assume hyena shape and potentially knock targets you hit that form prone. Like it!

Editing and formatting, for the most part, are very good on a formal and rules-language level. The glitch in the perhaps coolest feat does hurt the pdf somewhat, though. Layout adheres to the full-color two-column standard of the series, and the pdf has no bookmarks, but needs none at this length.

Alexander Augunas’ take on gnolls in SFRPG is per se solid; I like the Intimidate-focus via heckling – it makes sense to me and adds some unique identity to the gnolls. That being said, I would have loved to see the race have an additional trick or two. The improvements streamline the mechanics to the point where the race is worth 4 stars.

You can get this racial supplement here on OBS.